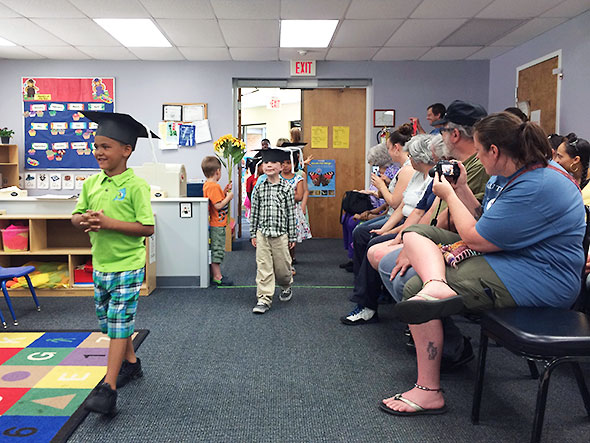 We’ve rustled our son out of bed with the same question for the majority of May: “Would you like to ride your bike or bus to school?” “Bike!” he barks back with authority. His interest in cycling was sparked by National Bike to School Day on 6 May 2015. My daughter and I had eye appointments scheduled first thing that morning and we decided that, upon our return from Xenia, the whole family would hop on bikes and accompany our oldest to school. It was a beautiful day for a bike ride, comfortable and clear. The dogwoods were hitting the peak of their apple white bloom, and the village yards were freshly laid carpets of brilliant green. After a slow rolling start, my daughter and I raced ahead to get lunch at Current Cuisine. We waited for the men join us in their own time, but my husband soon radioed that they had made it as far as Livermore Street and, on my son’s request, turned back for home. 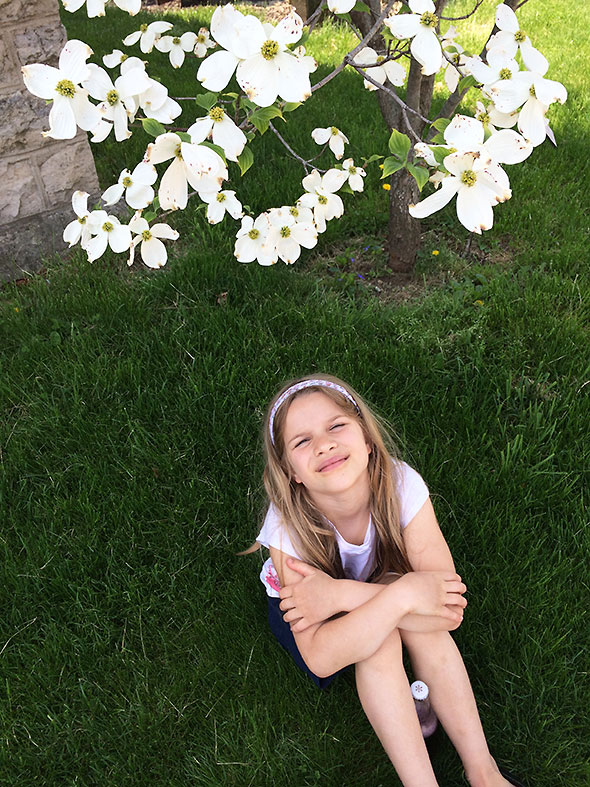 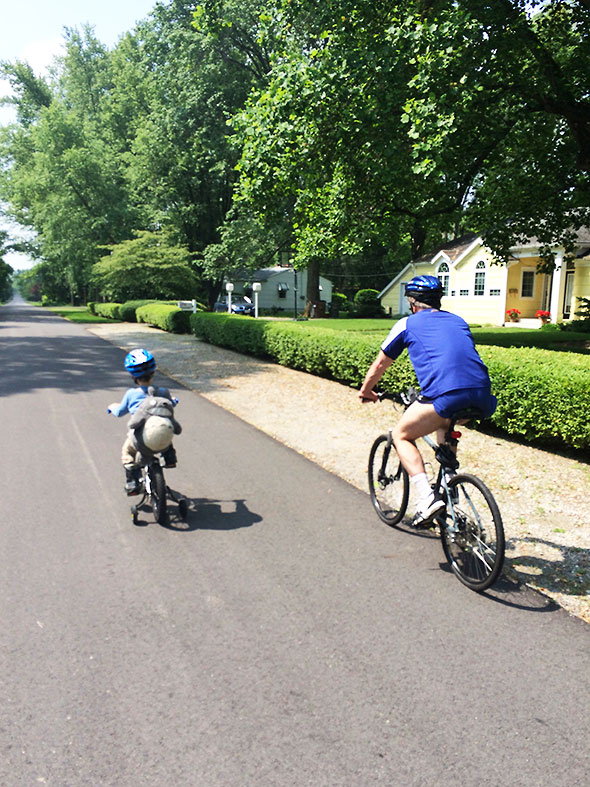 Our young man was not discouraged by his abbreviated bike trip; quite to the contrary, he was emboldened. He had proven himself capable of riding the distance to Friends Preschool on Herman Street, the southernmost cross street on Livermore. The following Monday he pronounced Bike to Preschool Day and, on his insistence, we called off the bus and suited up to take the 8-block ride with him. I wasn’t sure that our young man would complete the trip, but we had had a good breakfast and we had plenty of time to try. Diligent in his effort, our son succeeded on that maiden voyage. We were not speedy but steady and confident. He made the preschool room in ample time for morning meeting. 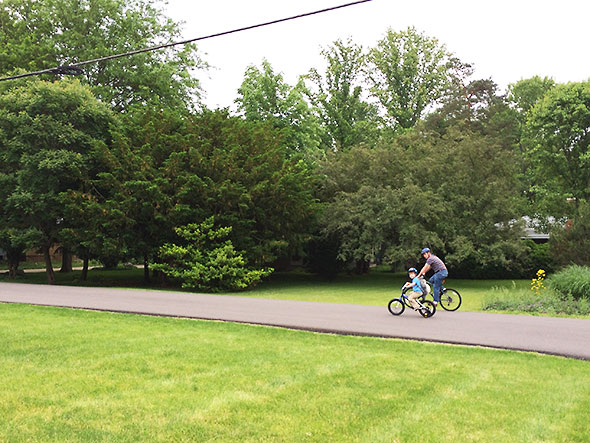 And so began a trend. With the streak of good weather that mornings offered in May, our son had little to frustrate his springtime fascination. Eager for the morning exercise, he’d strap on his Batman boots, blue helmet, and Totoro backpack and off he’d ride… his father cast as sidekick. 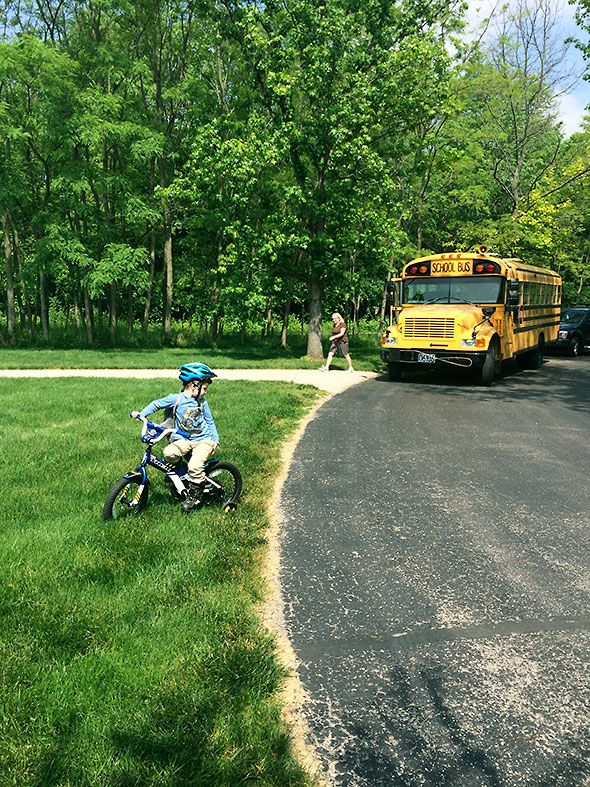 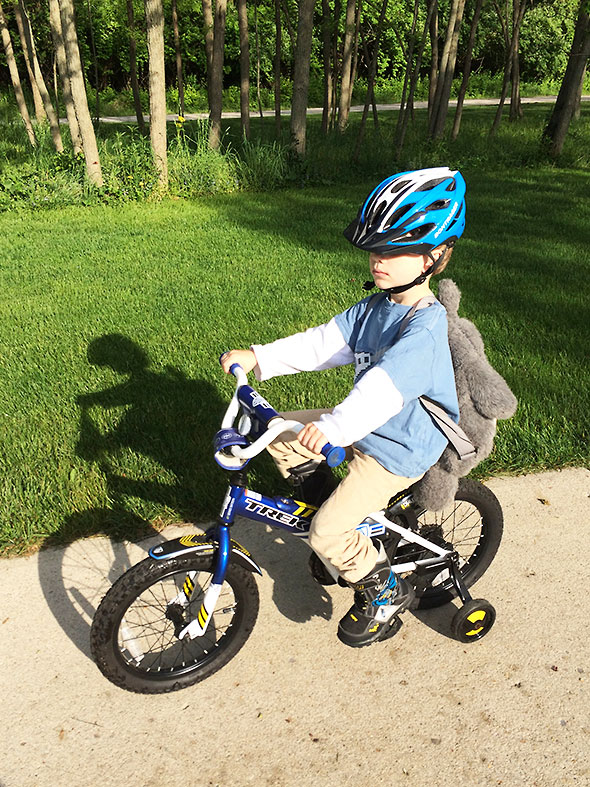 Wednesday afternoon this past week, our family arrived at Friends for a commencement ceremony. Sixteen children, in a room packed with ken, celebrated their preschool graduation and their anticipation of entering kindergarten at the start of the next school year. The children marched into the classroom to Pomp and Circumstance gamely wearing graduation caps made of sturdy black poster board and long tassels of white yarn. Our son wore his cap low on his brow… covering his eyebrows and perhaps a sly secret or two. 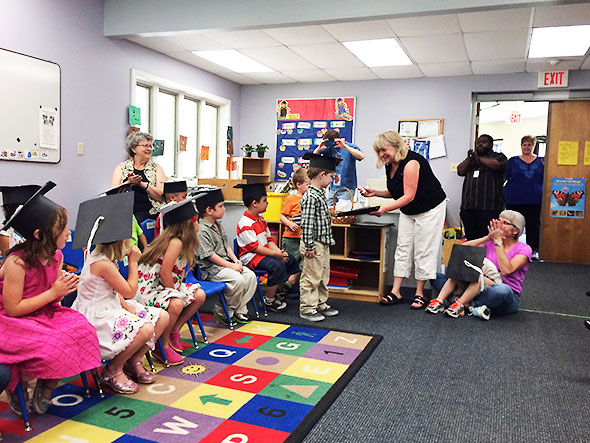 After thanks were handed out to the preschool specialists—occupational therapy, physical education, and speech therapy—and teachers, the children performed three songs. Our son pantomimed his way through the performance not quite brave enough to sing out loud. Still, he got into the music shaking his hips, making theatrical faces, and flashing smies; he hammed it up broadcasting the funny parts with his big eyes and exaggerated gestures. 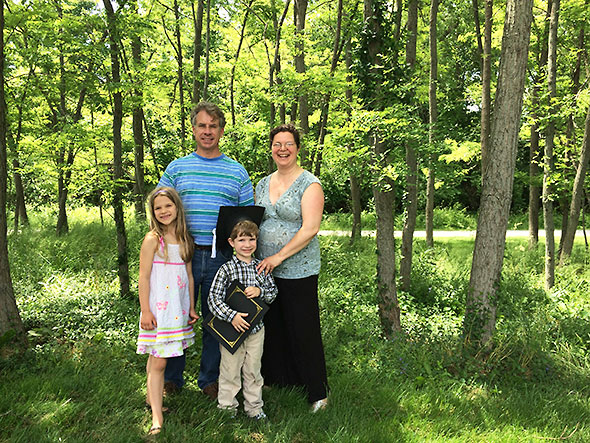 After the teachers handed the students their graduation certificates, we shared cups of punch, a slab of cake, and snacks before the families begin to part ways. Outside, the day was bright and lush with a restless wind catching the freshly sprung leaves. Still sporting his graduation cap, my son let me examine his diploma while he proudly spelled his name out. He rescued a book from the car that he received in the mail just before the ceremony. It was a hardcover book, a final gift from the Dolly Pardon Imagination Library, a service sponsored by the Greene County Public Library for children under the age of five. The book has a mouse on the cover; its arms are outstretch and it shouts “Look out, Kindergarten, here I come!” 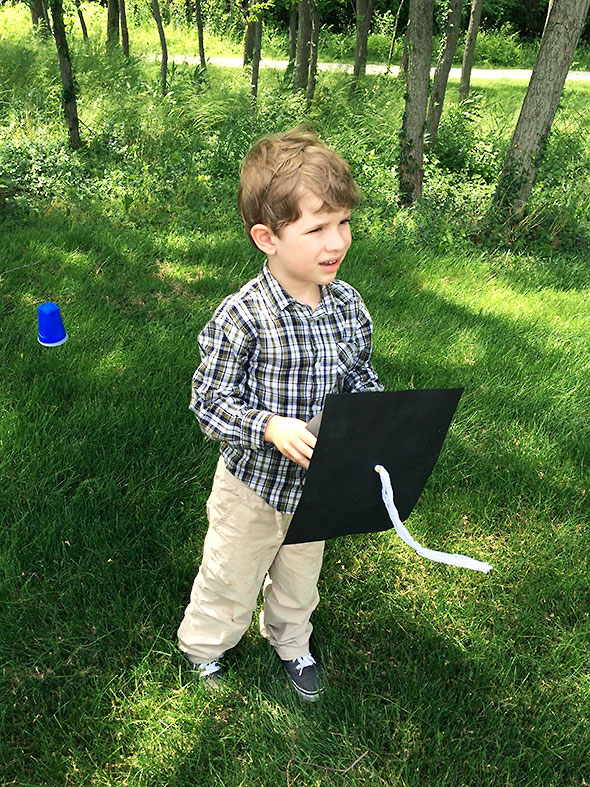 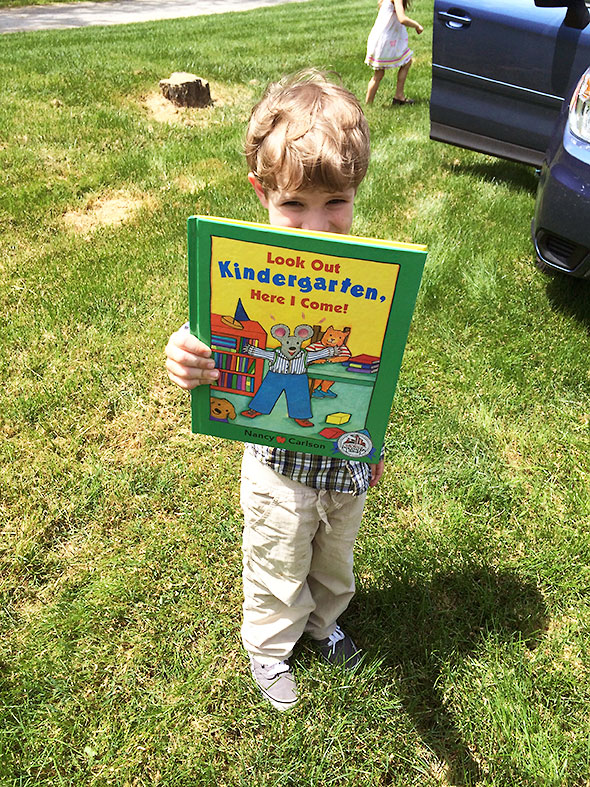 When I woke our son on Thursday, I asked him again “Bike or Bus?” He answered, “Bike!” smartly and hopped over his sister’s bed on his way to breakfast and a new day. My husband rode with him to preschool one last time and helped him clear out a cubby filled with art work and that spare set of clothes that our son is almost certainly about to grow out of. 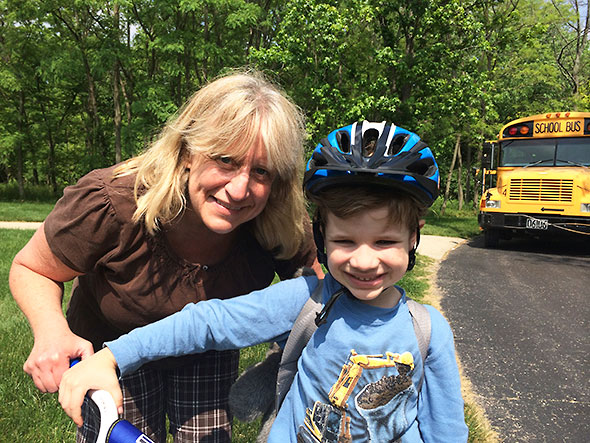 When the bus arrives to take the other children home, I join my men for the bike ride home. His teacher Janice Kumbusky gives him one last hug, and bus driver Mary wishes him a fun filled summer. We express our heartfelt thanks to one and all, thinking back over two school years, relieved and excited over the progress our young man has made. He arrived at preschool shy and solitary, often unwilling to speak up or join in. Now he crosses thresholds that he once refused, taming anxiousness and sometimes overwhelming excitement, as he works through that stage of awkwardness commonly known as childhood. 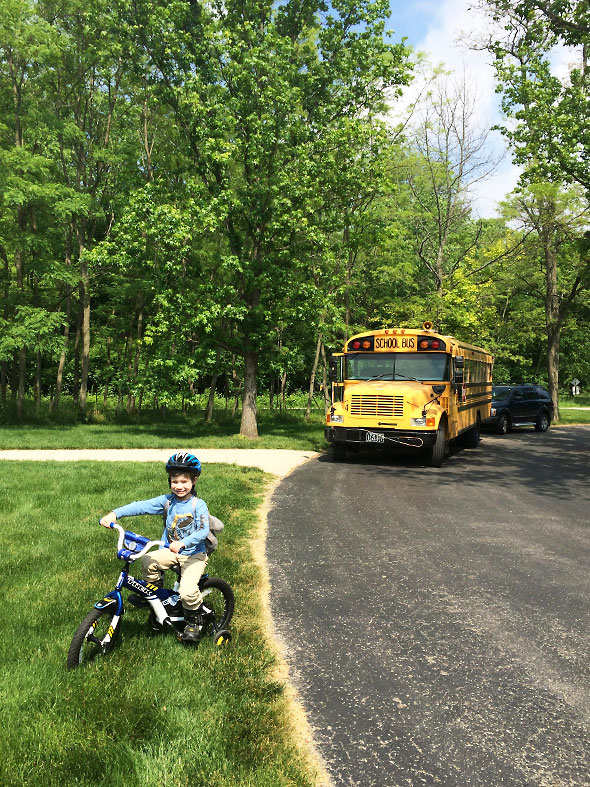 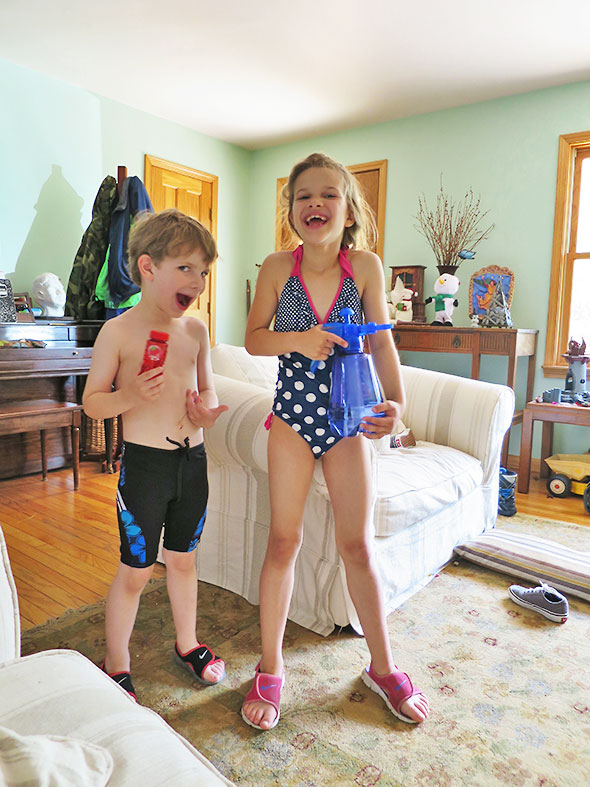 Well, one threshold he’s more than ready to clear is the advent of summer. We are on the cusp of a new beginning, the next stage and challenge of a young learner’s life. Ah, but, first before Kindergarten there’s something very special to fit in…a summer filled with freewheeling bike trips and park rides and the company of those who more than anything else love to see you smile.