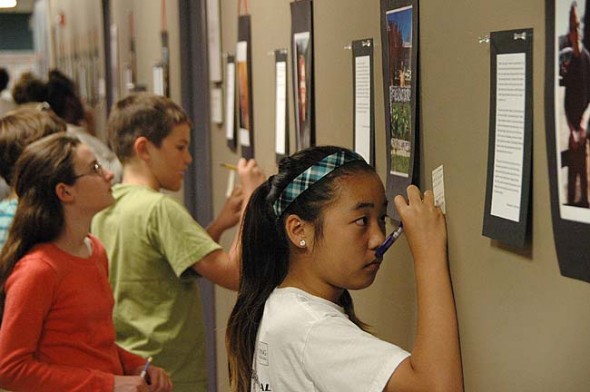 Sixth grader Marian Krier participates in a gallery walk where they evaluate each other's work and provide warm and cool feedback that would benefit the photojournalist. Each student had to evaluate 10 pieces. (Photo by Matt Minde)

The following piece was written by sixth-grade teacher Sarah Amin, describing the photojournalism project “The Yellow Springs Community: Diversity and Acceptance.” The show will be on display through the first part of June on the walls of the second floor north hallway at Antioch University Midwest.

A few weeks ago, 6th grade students from Mills Lawn School walked around the downtown Yellow Springs area in search of an answer to the question, “Is the town of Yellow Springs as accepting of diverse identities as we think it is?”

This project came to light when a discussion around the violence and non acceptance of differences was heavily covered in the media. The Charlie Hebdo incident in Paris, France, had just occurred, protests over police brutality sparked by the Ferguson shootings were on every news coverage, and the IS militant group was being extremely vocal. The students were wondering why such extreme measures were taking place. Where was the disconnect? Why are people lacking in acceptance of one another as human beings?

From this discussion began an examination of the role of photojournalists as they tell the public their stories. It was discussed how viewers process photos and how photographers consciously observe and evaluate the surroundings and use that to help tell a story. Photographs can be used to highlight human differences or inspire empathy. Nan Meekin, a professional photojournalist, visited our classrooms with samples of her work over time. She discussed the importance of acknowledging the surroundings, the body language, and facial expressions of her subjects; that these factors play a role in telling the story.

As the class analyzed how human beings make judgments of others, how stereotypes play a huge role in how we judge, students began to understand that identity has many components; some are individual elements while others are related to membership in a specific group such as ethnicity, race, religion, gender, sexual orientation, and/or age.

In class, students took two weeks to analyze their own identity in terms of self perception and groups they identify with. They had to find a way to communicate who they are in a “selfie” photo. Then we did partner photo shoots so that peers can communicate how they perceive their friends.

The question, how can an understanding of identity help connect people in a positive way surfaced from our discussions. Students mentioned that they are lucky to live in Yellow Springs where people accept each other. Student insight was that since citizens are open about their differences that others are more likely to accept them. This comment brought to mind the Humans of New York page where a photographer takes pictures of random people on the streets of NY, interviews them, and shares them on his blog/FB page. The responses from the social media community is very positive and does in fact unite a wide range of people from around the world.

Since the students were exploring identity, they were asked if Yellow Springs is truly as diverse as we think and how can we use photos to challenge stereotypes of our town: how does an understanding of each other’s differences connect us as humans? For the photojournalism project, the students were challenged with the question, “How can we, as community photojournalists and writers, tell an interesting story that helps people explore diversity in our community?”

The final product, which will be on display on the second floor walls of the north hallway in the Antioch University Midwest building, will be photographs and interviews of a selection of people who were downtown during our visits that strive to show individual stories, experiences, or points of view.

The students and teachers of the sixth grade would like to thank all of the individuals who gave time out of their day to allow our students to practice interviewing and photographing people they do not know. All community members are welcome to attend.