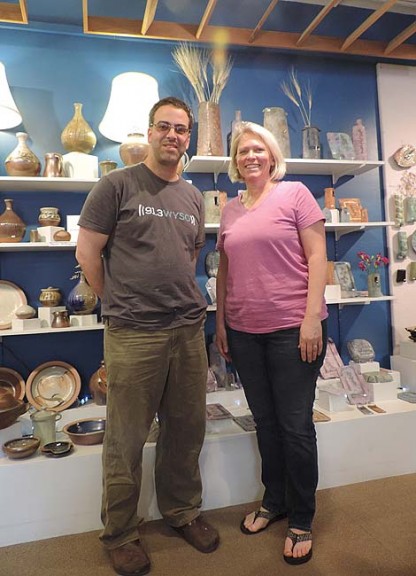 Two new potters are firing up Yellow Springs Pottery with an array of distinguished, decorative pieces and wood-fired, functional stoneware.

This April, Naysan McIlhargey and Lisa Wolters joined Yellow Springs’s pottery co-op as its first new members in roughly 15 years, bringing their passion for pots and a shared desire to foster an appreciation for the ceramic arts to the store, along with their handmade wares.
McIlhargey, owner of nearby Miami Valley Pottery, focuses on wood-fired, dark stoneware, often with iron, which consists of daily items, including kitchenware, vases and even table lamps. In fact, he is the first wood-fire potter the co-op has ever had.

His works’ raw, earthen finishes are born out of McIlhargey’s 30-foot-long kiln, which feeds on 2,400-degree heat and wood that ranges from pine to cherry. The result is never certain, leaving the surface of his stoneware up to the kiln, its reserve of ash and a little to chance.

Much like his firing process, McIlhargey’s focus on the functional has always been a natural choice.

“For me, it’s the ultimate expression of the combination of skill and knowledge of the materials,” he said. “I use pottery in my own home, and I know what joy it brings me.”
Wolters, however, takes a different approach to ceramics, focusing more on flatwork, particularly hanging wall plaques that are inscribed with inspirational phrases and often accompanied by impressions of objects. She uses a small electric kiln and an oxidation firing to make them.

Each plaque’s surface is a cascade of pastel glazes — blurred almost like watercolors. One of Wolters’ pieces quotes Emily Dickinson, reading, “Of all the souls that stand create — I have elected one.”

Wolters has more obviously usable objects such as vases on display at the co-op, however, she believes her flatwork also offers functionality.

“I feel like people are still viewing and using these pieces, but it’s functioning in their life in a different way,” Wolters said. “It’s not just something put on a shelf. It’s something that’s a reminder all the time of ‘Oh, I need to do this in my life.’”

Specifically, he thinks his former student’s work, as the first wood-fire potter, provides much more than just functionality but also an opportunity for learning.

“We have a lot of people come through here from all over the world … lots and lots of visitors who have never seen wood-fired pottery before,” Hergesheimer said, “so, it’s a chance to educate the public a little bit about the process and what it looks like. That’s a good thing I think because wood-fired is kind of the original pottery technique.”

Evelyn LaMers, the longest active member of the pottery co-op, notes that McIlhargey’s work is just what the co-op needs.

“Naysan’s work is solid functional kitchenware, which is our strongest market segment,” she said. “We already had functional work, but never enough to meet the demand.”

Both Hergesheimer and LaMers believe Wolters also offers something previously lacking.
“Lisa’s work is mostly something that we don’t have — have never had — in here,” Hergesheimer said. “This kind of flatwork, it’s more decorative. A lot of our work here is functional, and hers … it has a message, whereas a casserole is a casserole. You cook in it, but these give you some sort of daily inspiration.”

LaMers agrees, calling Wolters’s work “distinctive,” and hopes her additions to the pottery co-op will “appeal to a customer that [they] have not served in the past.”

Despite the pair’s artistic differences, McIlhargey and Wolters wholeheartedly agree that it is an immense privilege to display their work at this one-of-a-kind establishment.
McIlhargey calls the co-op “the gold standard for pottery in Yellow Springs.”

“There’s nothing like this co-op, especially with the history,” he said. “There’s not a place where you can have 10 different potters with a high quality of work under one roof.”
Wolters agrees, noting that a co-op focused strictly on pottery is rare and that joining has been a long-term goal.

“For me, it’s been a dream for 25 years,” she said. “When I first moved to this town, I took a pottery class with Janet [Murie], who’s still a member, and she told me about it. I walked in here and said, ‘Wow, I would love to sell my work here!’”

For Wolters, Yellow Springs Pottery is a local institution that’s “ingrained” and “has a lot of credibility.”

McIlhargey sees the co-op as an opportunity to educate the public about the tradition of ceramics.

“It’s our responsibility as potters in Yellow Springs to educate people, not just to sell the work, but to create a culture of appreciation,” McIlhargey explained. “A big part of what I do when I sell pottery is talk about the process.”

Both hope to foster such an appreciation for the ceramic arts in their time at the co-op, but note that the store and its fellow members are teaching them as well.

“The store has a very diverse collection of surfaces, colors, techniques and even approaches to the making process,” McIlhargey said. “It’s well represented in the world of pottery.”
For both potters, the professional collaboration is both inspiring and artistically challenging.

“Just being around these great potters and having my work next to theirs is pushing me to become a better potter,” Wolters said.

* The writer is a freelance contributor to the News.