Faith in change on climate

Pope Francis’ encyclical on climate change, issued on June 18, was the first ever to address climate change and appeal to all the world’s citizens, according to Marianist Sister Leanne Jablonski, scholar-in-residence for faith and environment at University of Dayton’s Hanley Sustainability Institute. The educational edict, traditionally issued just a few times during a papal term, was a wide-swinging push for the political change needed to halt the disastrous effects of human-caused climate change, she said. And as UD’s expert on encyclicals, Jablonski is excited to give her first post-encyclical talk at Yellow Springs Universalist Unitarian Fellowship meeting this Sunday, July 12, to help spread the urgent message and keep the solution-oriented energy alive. The event begins at 10:30 a.m. at the UU fellowship located at 2884 U.S. 68 just south of town. 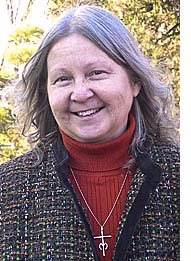 Marionist Sister Leanne Jablonski of the University of Dayton will speak at the Unitarian Fellowship this Sunday, July 12, at 10:30 a.m. on the recent papal encyclical on climate change. (Submitted photo)

Last month’s 184-page encyclical was several years in the making and included exhaustive scientific data as well as wide-ranging expert opinion from natural and social scientists, said Jablonski, who holds a Ph.D. in plant physiological ecology/global climate change from McGill University. The document isn’t the first to confirm that climate change is mostly caused by humans — reports such as the 2014 Intergovernmental Panel on Climate Change and conclusions from dozens of scientific academies around the world agree that most of the earth’s warming trend is caused by human activity. But the Pope’s letter is a call to people of all nationalities and persuasions to demand a transformation in the way humans operate in this finite ecology on Earth.

“It’s a call to justice to make the world a better place — that’s what really excites me about the Pope’s encyclical — it makes us think about what kind of world we want to leave to those who come after us,” Jablonski said.

In the encyclical, the Pope uses the term “integral ecology,” which places the interconnection between humans and plants above the ecologies of either one, she said. Whereas historically people living on the land were forced to work in harmony with the environment for survival, modern civilizations no longer see the need to care properly for the environment and have lost their connection and respect for the land. Pope Francis spoke of the need to bridge that gap.

“The image he presents is that humans are not separate from the rest of the world,” Jablonski said.

Faith groups around the world have supported environmental justice for many decades, and first united around climate change awareness with the Interfaith Climate and Energy Campaign, which kicked off in Ohio in 1998. The Yellow Springs Unitarians as well have taken an active role in climate action at a local level. Members of the local Unitarians’ Social Justice Committee have planned five programs on the environment this year, and member Marianne Whelchel organized a discussion group on Naomi Klein’s “This Changes Everything: Capitalism vs. the Environment,” some of whose members joined a local climate education group with UU member Al Schlueter. Several UU members, including Sylvia Carter Denny, attended the Climate March in New York last year. And Methodist Church member Macy Reynolds and Whelchel also joined the Yellow Springs Resilience Network and are currently organizing faith groups in the village around climate action.

As a member of the National Religious Partnership for the Environment, Jablonski hopes to unite faith groups too. While the scientists have done their part to prove the main cause of climate change, Jablonski feels it’s the job of the spiritual movers to motivate citizens to care about the harm they’re causing, and to demand public policies that better protect and steward the land.

“I used to think that the big environmental issues were things like climate change, but now I think the problems are pride, apathy and greed — science doesn’t solve that,” she said. “It’s now our job to focus on our common experience of awe and wonder so that the sacred will be viewed with respect. We are charged to give the environment respect.”

Jablonski directs the Marianist Environmental Education Center at Bergamo Center in Dayton and is an adjunct faculty member in religious studies at UD. She is past chair of the Ecological Society of America environmental justice section, and in Ohio has served as coordinator for the Union of Concerned Scientists in Climate Change as well as the Ohio Interfaith Climate and Energy Campaign for the Ohio Council of Churches, among many other leadership posts in the faith and climate movement.