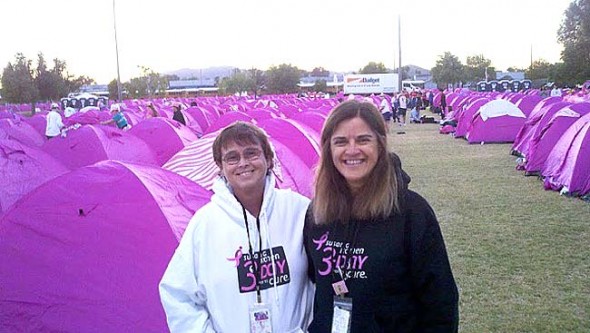 Village Manager Patti Bates, a four-time cancer survivor, is training for a three-day, 60-mile walk she’ll make in November as part of the annual Susan G. Komen for the Cure fundraiser. She’s shown here at her first three-day event several years ago, with her friend Lois McNight. (Submitted photo)

In her first year in the position, Village Manager Patti Bates has shown what some view as uncommon equanimity in a demanding job. And it turns out she’s come by that equanimity naturally. A four-time cancer survivor, Bates knows what’s worth getting steamed at, and what’s not.

‘It does change things,” Bates said in a recent interview, regarding her experience with cancer. “I don’t sweat the small stuff. It’s why a lot of things don’t bother me.”

As a cancer survivor, Bates feels compelled to do what she can to help others survive. This fall, she’ll fly to San Diego in order to walk 60 miles in a three-day fundraising event sponsored by Susan G. Komen for the Cure, which funds breast cancer research. It’s her second time taking part in the annual fundraiser, and last time Bates raised over $5,000.

Bates invites villagers to help her fight breast cancer, by going online to The3Day.org/Donate and searching for Bates’ team, Un4gettable PSLD (or you can search for Patti Bates). And in October, aided by Village Council member Brian Housh, she’ll hold a quarter auction at 1 p.m. on Saturday, Oct. 3, in the Bryan Center gym to raise funds.

“It’s important that we make the effort,” Bates said.

The first Komen event Bates took part in, five years ago, made a profound impression. Upon arrival in Phoenix, she was provided with a pink tent, which she set up in a city of pink tents as far as the eye could see. On the first morning of the event, Bates set off with thousands of other walkers, some with breast cancer and some with  friends or relatives with the disease. And some walked in memory of those who had died.

“It’s a pretty astounding experience, walking in a sea of people who all have the same goal,” Bates said.

The Komen walk/run is the world’s largest breast cancer fundraising event, according to Wikipedia. In 2015, there will be seven walking and running Komen events in this country, and 150 worldwide, with more than 1 million participants. Since the event began in 1983, the group has raised more than $2 billion for cancer research, outreach and education on the disease.

In San Diego, Bates will be accompanied by her brother-in-law, Frank Walsh, on the PSLD team, with the acronym standing for Patti, Sheila, Lori and Debbie. The team name honors, besides Bates, three relatives and friends who are in various stages of breast cancer.

Bates’ own experience with cancer has spanned two and a half decades, beginning when, at age 31, she found a lump in her breast. No one thought it was cancer because she was young and healthy. But it was. (She strongly recommends that women do self-exams and get regular checkups.)

But the process was hard. Chemotherapy killed her appetite so that she didn’t want to eat, but she had to keep eating to keep up her strength. And while the first few rounds of chemo weren’t bad, they became progressively harder, and exhaustion dragged her down. But Bates kept working. For each round of chemo, Bates allowed herself one day off work, but she pushed herself to go back after that.

In 2012, the cancer returned again. This time Bates had a double mastectomy followed by chemotherapy. While she started the process of breast reconstruction, Bates struggled with infection and high fevers, and ended up deciding to forego the process. And from then on, the cancer has stayed away.

“Hopefully, it won’t come back, they’ll find a cure and nobody will have to go through this anymore,” Bates said. But she’s also a realist.

“It can come back anytime and can have a different outcome,” she said.

But her experience also illustrates the shift in thinking regarding breast cancer in recent decades. Once considered a likely killer, the disease is now viewed more as a chronic condition.

These days, Bates is spending considerable time training for the November event. You might see her on the bike path with her ear phones on (she’s listening to the Eagles, Mary Chapin Carpenter, the Beatles, and the Mamas and Papas, among others) walking briskly from her Birch III home south to a park near Xenia and back, a distance of about 12 miles, or walking north to Jackson Road and back. She’ll work up to 44 miles of walking a week shortly before the event. It’s a big commitment, but it’s worth it, according to Bates.

“The training is good for me, and it’s for a good cause,” she said.

While Bates has completed one three-day Komen event so far, she also took part in a second fundraiser, in Cincinnati. It was in 2012, while at her previous job as manager in Williamsburg, Ohio. The cancer had returned for the fourth time and Bates was in a wheelchair, pushed by several friends who helped her take part in the daylong event. Together, the group called themselves the Tough Cookie Brigade.

In honor of the effort, her friends gave Bates a drawing that hangs in her Bryan Center office. The drawing shows a chocolate chip cookie wearing pink sneakers and pink boxing gloves, throwing a punch.

But to Brian Housh, who’s helping Bates with her publicity effort, her commitment to the three-day walk is indicative of her strengths as a Village manager.

“This underscores why we hired Patti, her relentless pursuit of doing good and of working hard,” he said. “I’m glad I can be a part of it.”