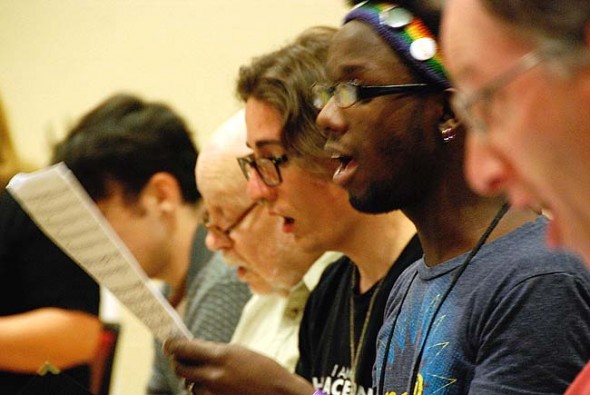 A choir’s joyful sounds for the Earth

Local resident Cathy Roma believes that singing through the body about sacred ideas brings them alive and helps them to manifest. Through choral direction over the past 35 years she has given voice to issues of peace, unity and race and gender equality. And this month she and over 100 singers will give voice to Mother Earth through Paul Winter’s Missa Gaia, or Earth Mass, to be performed in both Yellow Springs and Dayton next weekend.

The performances take place Friday and Saturday, Sept. 11 and 12, at 7 p.m. at the Antioch College Amphitheatre, and Sunday, Sept. 13, at 3 p.m. at Grace United Methodist Church in Dayton. They feature a 100-person World House Choir, a nine-instrument orchestra, vocal soloists Jennifer Gilchrist, Kijin Higashibaba, Carl Schumacher, Marie Elyse Krulewitch-Brown and Charles Beckley, as well as dance artists. Each concert is also preceded by a two-hour environmental fair for grassroots organizations and food trucks. In total, the weekend is a call to action on the social justice and environmental issues provoked by the growing incidence of what scientists are now calling climate disruptions.

The Missa Gaia was written by jazz saxophone artist Paul Winter in 1982 in celebration of the earth as a sacred space. The 15 pieces were recorded live in the Cathedral of St. John the Divine in New York, where it is performed every October at the Feast of St. Francis, the 12th century patron saint of animals. The mass integrates world music with songs from the wild and melds the choir and instrumental parts with the recorded voices of a tundra wolf, canyon wrens, harp seals and humpback whales.

Roma recalled the mass after reading Naomi Klein’s 2014 climate treatise, “This Changes Everything,” and felt especially moved to act in support of the impoverished populations most vulnerable to the effects of climate disruptions and climate-induced natural disasters. Social justice issues are environmental issues, Roma said, adding, “You can’t see a concern for the environment as separate from social justice.”
“This is so present, so real, so now,” she said of the need for climate action. “This is the perfect time — even the Pope has said we need to act for the common good.”

And singing is a powerful way to awaken awareness, Roma said. Voicing our beliefs through song is transformative. It changes a person, she said.

“Singing something you believe and running that through your body so you’re vibrating with intention, you begin to notice,” she said.

The Missa Gaia includes the “Ordinary,” the “Kyrie,” the “Gloria” and other texts from the traditional Catholic Mass. But it also incorporates the earth’s creature sounds, as well as Native American cosmology, Afro-Brazilian rhythms, African-American gospel, Gregorian chant and Western classical tradition. And while the music is challenging, part of its appeal to Roma is that it is approachable by “anyone who can match a pitch,” which is the only prerequisite for membership in her choir.

“If you name yourself the World House Choir, you can’t be elitist, right?” she said.

The choir’s inclusionary approach models that of the interdependent world issues its members sing about, Roma said. She hopes that by reminding people of how we’re all connected, the music can inspire people to “open up to a consciousness of a bigger world” and make decisions to, for instance, work against the dumping of toxic waste in Dayton, or bring produce to a food desert where there are no grocery stores.
“Beauty encompasses struggle — it’s bread and roses,” she said. “It’s lifting up all of our voices to recognize there’s something bigger than all of us that we need to pay attention to.”

In connection to the performances, the World House Choir will also sponsor a free environmental film series each Wednesday in September at 7 p.m. in the Antioch College Arts and Science Building, room 219. On Sept. 9, the 2013 film “Revolution” follows photographer Rob Stewart to the coral reefs of Papua New Guinea, deforested regions of Madagascar, and the Alberta tar sands to document evidence that species loss, pollution and scarcity of resources are reducing the Earth’s ability to support humans. On Sept. 16, the 2014 film “Cowspiracy: The Sustainability Secret,” describes how animal agriculture is an enormous contributor to air and water pollution. On Sept. 23 “Climate Refugees” screens, a 2010 film showing how more frequent extreme weather events such as droughts, hurricanes, forest fires and mass flooding are causing border conflicts and mass global migration of displaced people. The final film screens on Sept. 30, “Earth,” the feature-length version of the 2006 BBC television series “Planet Earth,” capturing the migration of a polar bear, an elephant and a whale.

September is the month for climate justice events in Yellow Springs and elsewhere, including a regular Thursday discussion on the book “Time to Stand Up: An Engaged Buddhist Manifesto for Our Earth” at the Dharma Center, a youth workshop on upcycling and the environment at Yellow Springs Library on Sept. 8 and Community Solutions conference Climate Crisis Solutions: Tools for Transition at Antioch College, beginning Sept. 25. For the full schedule of events, go to ysnews.com.