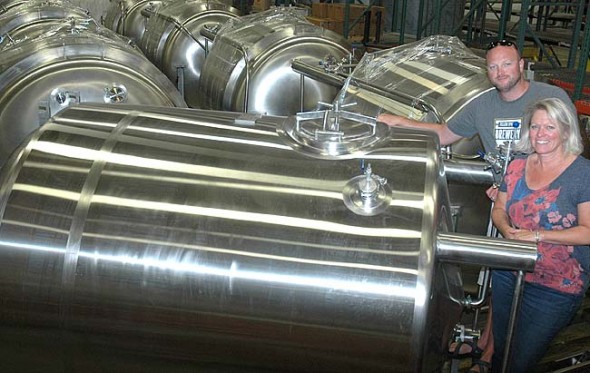 Nate Cornett and Lisa Wolters, owners of Yellow Springs Brewery, temporarily shut down production this month for an expansion that will allow them to brew fives times as much craft beer as they were this past year, their second year in business. They will soon move nine 30-barrel stainless steel brew tanks from storage at the former Creative Memories building to the brewery at MillWorks. (Photo by Lauren Heaton)

Yellow Springs Brewery has a habit of being ahead of its time. When the craft brewery opened in the village in the spring of 2013, there were just a handful of small brewers in the Dayton region. Now there are at least 12, and Ohio went from 76 to 110 craft breweries in that same time. The local business also estimated it would take a few years to outgrow its initial seven-barrel brew system, but three months after it opened, the brewery ran out of beer and had to expand to twice its production volume.

Now, two years and four months into the brew culture craze, the demand for beer from Yellow Springs Brewery has again exceeded production capacity. So owners Lisa Wolters and Nate Cornett have shut down production to grow to about five times the current capacity and begin canning beer, goals they originally thought would take them five years. This time around, they are better prepared for the investment. Getting loans is easier; hiring staff to help with the upgrade is smoother; and purchasing nine 30-barrel stainless steel tanks, custom made in China, isn’t quite as scary.

Looking at some of the old equipment now in storage at the former Creative Memories building, Wolters recalled how much the initial business investment seemed to her at the time.

“This tank looks so small now, but then it seemed like a big investment!” she said. “It doesn’t feel that way anymore.”

The last production day was July 31, and the couple plans to start brewing again next month and start distributing around the end of September. The tap room will remain open through the expansion.

Yellow Springs Brewery has grown steadily since its beginning two years ago. Starting out at an annual production rate of 400 barrels, the business quickly grew to a 15-barrel brew house producing 700 barrels a year (one barrel is about 31 gallons, or two large kegs.) But over the past year, the company still hasn’t been able to meet demand for their Belgian style brew, especially Captain Stardust, a saison and the number one seller, and Zoetic, an American pale ale and the number two seller.

“The way I define meeting demand is if I see barrels sitting around on the shelf, and we haven’t gotten there yet,” Cornett said.

With a list of about 100 wholesale customers in the Dayton and Columbus areas, including Peach’s Bar and Grill, The Winds Cafe, Little Art Theatre, Fox & Hound Sports Tavern, Lucky’s Taproom and Dewey’s Pizza, the brewery has only been able to keep about 20 percent regularly stocked with beer, said Cornett, who manages sales and distribution for the business. And there was never enough beer available to consider bottling for wholesale to retailers. So the brewery is revamping its operation.

With nine 30-barrel fermenters and three 15-barrel tanks, the brewery plans to start at a “relaxed” pace of 2,000 barrels over the next year, which still gives them room to grow, Cornett said. They also plan to can their two top sellers. The empty cans, which only come in volumes to fill a semi-truck, will be kept in storage and filled and capped on an as-needed basis. They will be distributed to local outlets, such as Village BP, the Winds Wine Cellar and the Brewery’s own taproom, as well as specialty bottle shops for craft beer, such as Belmont Party Supply in Dayton.

To make all this happen, the brewery has created a few new local jobs. Shawn Combs is now sales manager, Jeff Robertson manages deliveries, and Kate Campbell manages the taproom, where 14 part-time staff are now able to sell beer and wine from other makers. They join brewmaster Jeffery McElfresh and two assistant brewers, Joel Brinks and Jayson Hartings.

“It’s amazing how many people it takes to do this,” Wolters said.

The space at MillWorks was always able to accomodate an expansion or two, with the additional offsite storage facility, Cornett said. The brewery now leases about 6,700 square feet including the taproom and original brew space, an adjacent garage for a new cooler, and an extension space beyond the brewhouse for dry storage and offices.

From almost any perspective, Yellow Springs Brewery is a success story. Wolters and Cornett believe it’s due to a combination of things, starting with a brand name that is heavily fed by the now wide-spread image of Yellow Springs as a popular destination. The couple has also fed back to the village a priority supply, and plenty of specialty versions, of the local beverage.

The beer isn’t doing badly either. Six months after opening, the brewery won the silver medal at the Great American Beer Festival in Denver.

“That’s like winning the Super Bowl — for beer to get a medal,” Cornett said, adding that only six breweries in Ohio earned medals that year.

The brewery also chose not to lean on the India pale ales that are typical in the craft beer industry. Rather, they decided to trust in their saison, Captain Stardust, which hasn’t let them down and continues to be their flagship beer.

“It has a definite following — it’s almost a cult,” Wolters said. “It’s got its own little life.”
As an artist and an engineer, respectively, Wolters and Cornett won’t allow their growth to keep them from trying new ingredients and processes for their product. To date, Yellow Springs Brewery has created about 30 different beers, many of which haven’t gotten as much exposure as they deserve.

“The down side of getting bigger is we’re not as nimble in our ability to develop craft-type beers,” Wolters said.
But the couple intentionally kept their 15-barrel tanks operational so that they could still experiment and be creative with new types of beer.

“As brewers we always want to come up with new stuff,” Wolters said. “We’re creative people, that’s just who we are.”