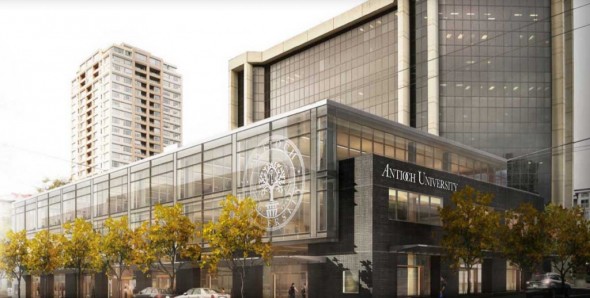 Rendering of the new AU Seattle space currently under construction.

Antioch University Seattle (AUS) announced yesterday that the west coast campus had sold its building in downtown Seattle and plans to begin leasing space in a new building just down the street.

According to the press release, Antioch University signed a long-term lease for the new space currently under construction at 3rd Avenue and Battery Street, however the move won’t take place until late 2016. In the meantime, the Seattle campus will remain in the building at 6th and Battery in a back lease arrangement with the buyer, HB Management, a private Seattle real estate company.

Antioch Seattle, one of Antioch University’s five campuses, has occupied its current downtown Seattle building since 1996, and celebrated its 40th year in Seattle this past February. As part of the relocation, Seattle is reinvesting a portion of the sale proceeds in a “state-of-the-art campus” at the new location along the 3rd Avenue transit corridor that connects Seattle’s major employment centers, South Lake Union and downtown.

“We are excited to design and outfit a building around today’s student. The days of rows of desks, a chalkboard and lectern are long gone,” AUS president Dan Hocoy said in the press release this week. “Our students need space to collaborate, learn experientially and leverage technology.”

The decision to relocate was connected to the university’s need to “[leverage] its real estate portfolio in support of a resilient business model,” according to Matt Anderson, Principal at Heartland LLC, a real estate advisory and investment firm serving as the University’s strategic real estate advisor across the five-campus portfolio. The firm supported Antioch in its campus sale and new campus site selection and lease negotiation.