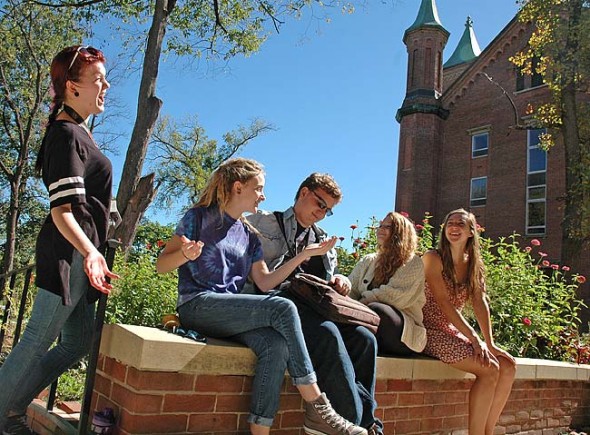 The fifth class of the revived Antioch College started classes this week. The 66 students, including, from left, Emily Langhardt, Kaitlin Staggs, Jonas Mufson, Rachel Isaacson and Helena Balcerzak, were attracted to the college because of its commitment to social justice, international co-op, small-town feel and unparalleled financial support. (Photo by Lauren Heaton)

The newest crop of Antioch College students, 66 strong, arrived on campus last week as the fifth class of the revived college. Several students said last week that among the other schools they applied to, including Reed College, Allegheny College and Ohio University, they chose Antioch because of its commitment to social justice, its international co-op opportunities and the incomparable financial aid they were able to receive from what they said is a highly reputable school.

“The problem of our generation is our inability to find work,” said Jason Mufson, a first-year student from southern California. “But here there is the opportunity to co-op, the campus culture is great, and the LEAF scholarship made it worth moving all the way to Ohio.”
Since the college reopened five years ago, each class has received a full Horace Mann scholarship that covered tuition for four years. The incoming class is the first to receive half-tuition Horace Mann scholarships that cover half the four-year tuition costs. But the college has added a host of other scholarships this year, allowing more than half of the incoming class to attend practically tuition-free. And for those who need loans beyond their scholarships, the current first years can now apply for federal financial student aid, thanks to the “fast track” accreditation standing the college received last year.

The new class brings the total enrollment up from 246 to 270, the highest the college has seen in its four years of operation. The students, all full-time and residential, will live in North Hall, as other new classes have, while the rest of the student body resides in Birch Hall with overflow in Case Commons, the units behind the Coretta Scott King Center. Classes started Tuesday for the 175 students on campus, while the school’s largest class of 95 students is spread out across this and other countries for co-op term.

The Class of 2019
The new students hail from 20 states, including two from Alaska and 22 from Ohio and at least one from Yellow Springs. Many already know they want to study art, environmental science, psychology and political economy. The class is curiously weighted toward women, with 73 percent female students, bringing the total enrollment to 68 percent female, compared to peer colleges in the Great Lakes Colleges Association (GLCA) which averaged 55 percent female as of fall 2013, according to Antioch College Director of Communications Matt Desjardins. Just over half of the class is first-generation students, the first in their families to attend a four-year college. Most have studied, volunteered or spent time abroad and have begun to learn, or have learned, a second or third language.

According to the dozen students who were interviewed on campus this week, many were attracted to Antioch because of what they found to be a unique campus that embraces every individual’s identity and actively engages in an environmentally friendly and socially just culture.
“The whole town and the school itself practiced what it preached,” said Yuri Fennelly of New York City, who plans to study environmental science and noted the college’s solar array and production farm.

Emily Langhardt of Tipp City was impressed with the college’s progressive take on identity, with groups for people of every color and creed, including Jew Crew and gender-neutral bathrooms.

“When we came in we got pins to put our pronouns on,” she said. “It’s amazing that people here are aware of those things.”

Others approved of the oft-quoted “Be ashamed to die before you have won some victory for humanity” by the college’s first president Horace Mann and cited the college’s sustained commitment to that admonition. Even among the “40 Colleges that Change Lives” referenced in the book of the same name, Antioch stood apart, according to Rachel Isaacson of Columbus.
“Something felt different about Antioch,” she said, referencing social change as her “reason for living…If I feel like I’ve made a difference in one person’s life, I’ll die happy.”
In addition to the caring and individualized culture, Antioch’s financial aid enabled many students to come. Of the 12 students interviewed for this story, 10 received enough financial aid from the Mann, Leadership and the Environment at Antioch Fellowship, or LEAF, and First-generation scholarships to cover an entire four years of tuition.

According to Dasia Yanes-Beckley of Cincinnati, she came to the college to study media arts and film and feels that without the Mann and First-generation scholarships, which each covered half of her tuition, there was “no way I could have afforded to be here.”
Financial aid still sizeable

In its first year of half-tuition Horace Mann Fellowships, the college admissions site values a full year’s tuition at the college at $33,000, which in addition to room and board, comes to $44,000 per year. Though they are reduced this year, the Mann scholarships have a combined four-year value of $64,000, Desjardins said in an interview last week. The Mann scholarships are set to continue, as the college has no plans to alter them at least through next year, according to Desjardins.

In addition to the Mann fellowships, the college also offers additional scholarships for specific areas of need or study. New this year are two such scholarships that provide half-tuition support, including LEAF, for students studying environmental science, and the Antioch Opportunity Scholarship for students who are the first in their families to attend four-year schools. The college has eight other merit and need-based scholarships as well as student employment opportunities that students can use to offset tuition costs.

Antioch is moving more toward a tuition-driven financial model and is evaluating the effects of a paying model on right-fit students, who become harder to find when the pool is limited to those who can pay tuition, Desjardins said.

“We’re looking at it hard this year — the challenge with offering only half tuition is the increased difficulty attracting ‘right-fit’ students,” he said. “We’re still not funding ourselves through tuition — we’re still largely a philanthropic model.”

For now, the Mann scholarships are helping to ensure that students are “right-fit,” including strong academic orientation, such as the incoming class, which had an average GPA between 3.6 and 4.0 and commensurate ACT and SAT scores.

Of the over 900 students who applied, about 110 were admitted. Of those, 66 enrolled and matriculated, producing a “yield rate” of 59 percent, as compared to the 34 percent yield rate at GLCA peer institution Oberlin according to Desjardins.

The next site visit from the HLC accreditation team is the first week in November, which will include a three-day evaluation on campus and a recommendation for final steps to take toward accreditation.

Currently, the college’s fast-track status allows students to apply for Title IV federal financial aid funds. This is the first class to be eligible, which is a “big deal,” according to Desjardins.

None of the students interviewed this week had grave concerns about accreditation. Alison Zimmerman feels reassured that the college informed her of the situation before she came and updated her on the status after she got here. Langhardt felt accreditation was “less of if and more when” the college receives it. And because accreditation will be resolved one way or the other before she graduates, Fennelly said that it wasn’t an issue now and she wasn’t worried about it.

And both Fennelly and Karen Fite were confident that even if for some reason accreditation wasn’t granted, future employers and other schools would either know the college’s reputation or believe that the educational and co-op experiences students had here were “still valid.”