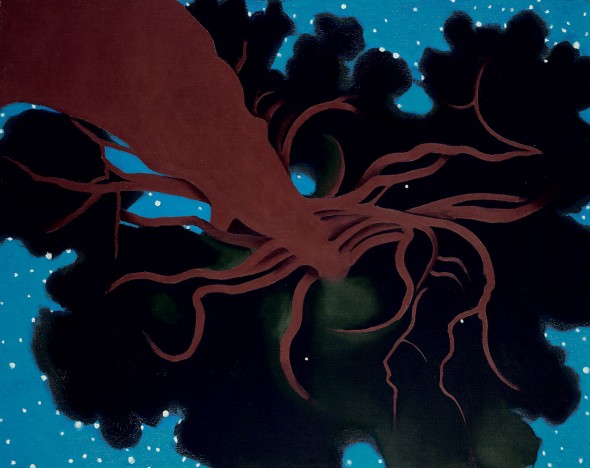 You can hang it any which way, but she preferred it this direction. Georgia O'Keeffe, "The Lawrence Tree," 1929. Collection of Wadsworth Atheneum Museum of Art.

I love this painting by Georgia O’Keeffe, and last night — I saw it. Out in the world, I mean. Something better than it, even, for when my eyes followed the long trunk of our spruce up into the navy blue night, I saw not just a crown of stars, but an actual crown jewel — a white gibbous moon at the spruce’s very tip.

It’s our last week in this house. Next week, we move just a few blocks away, to a new house with new star-spangled trees. Every sight now has the sharpness and poignancy of anticipated loss. It’s a minor loss, a minor grief, considering the joy we’re headed to. Our own house, after three years of renting this one, and years before that in other states and towns renting other houses.

O’Keeffe made the world her own by looking. We all do that, I think, whether we paint or not. So everything I’ve looked at for three years from the windows and the yard of this house is mine, though nothing’s actually mine — certainly not the moon! I love all the trees around us: Marcia’s stately sycamore, Jeff and Amanda’s maple to our east, guardian of morning. The Blue Atlas Cedar in Dave and Luan’s rock garden. It came down last spring, actually — the harsh winter took it — but part of the magic of looking is that you see more than what’s there.

Good-bye, good-bye, good-bye the blood beats in my ears. (In my “years,” my too-hasty fingers typed at first, and I like that, too.) I think of the English poet and mystic John Clare, who was “hyper-local” before such an ugly word for a beautiful state of being existed. Ten minutes by foot away from home, and he felt himself an exile. Everything was different, nothing familiar — not the flora, not the fauna, not the smells rising from the earth nor those carried across the new dome of sky. His very rootedness led, ironically, to traumatic experiences of dislocation and loss.

It doesn’t have to be that stark, of course. Clare’s exceptional sensitivity aside, there’s nothing truly traumatic about moving two streets over! But there are plenty of subtle forms of loss and longing that happen when we shift our scene. I can feel the pull of O’Keeffe’s longing in “The Lawrence Tree,” painted at D. H. Lawrence’s ranch during her first visit to New Mexico. And maybe there’s a sense of loss there, too, a loss of ground as she falls up into the northern New Mexico sky. Her life and her art will never be the same.