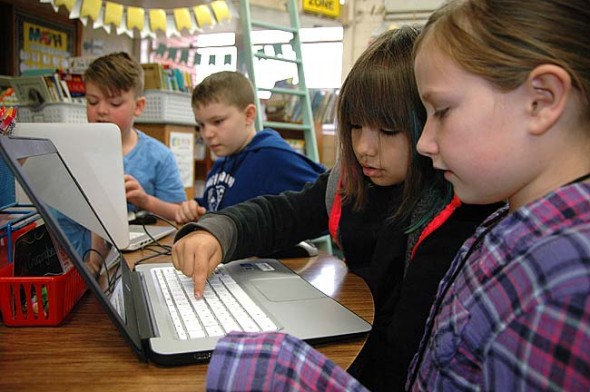 From left, Jack Hutchings, Maddox Fry, Era Creepingbear and Alayna Hamilton were among the Mills Lawn students who took part in Hour of Code last week, an international movement designed to introduce children of all ages to computer science and coding. Megan Bennett’s third-grade class was already ahead of the curve, having completed a project-based learning, or PBL, project called “Coding Cadets” this fall. The third graders took their coding knowledge to their older and younger peers, coaching each Mills Lawn class in the basics of creating with code. (Photo by Audrey Hackett)

MLS kids take a crack at the code

Megan Bennett’s third-grade class at Mills Lawn learned how to make things from scratch this fall, and now they’re teaching their older and younger peers.

But the school isn’t learning to cook. “Scratch” is a code — a computer programming language — that the students have become resident experts in. Having mastered the basics, the class is fanning out across the school, teaching every class, from kindergarten to sixth grade, how to create their own game characters, move them up or down, left or right, and even make a spacebot say, “Greetings, earthlings!” — all by manipulating blocks of computer code.

“The kids have been so excited to learn, and maybe even more excited to teach [these skills],” said Bennett.

Thanks to Bennett and her third graders, Mills Lawn students are among tens of millions of students around the world who took part in Hour of Code last week, Dec. 7–13. The international movement, led by the nonprofit Code.org, seeks to “demystify computer science” and give all children, particularly girls and students of color, exposure to a subject that the organization claims is as basic to the modern curriculum as algebra or chemistry. Federal lawmakers agree: the recently passed Every Student Succeeds Act, a rewriting of federal education legislation, elevates computer science to a core subject, according to the Code.org blog.

Like their counterparts in other states and countries, Mills Lawn kids are completing one hour of tutorials through the Code.org site. But they have the advantage of being coached by their code-savvy third-grade peers, who are working with younger children for two half-hour sessions, and with older children for a single half hour (students in higher grades will complete the second half of their “hour of code” on their own).

For many in Bennett’s class, exposure to coding began with a six-week project-based learning, or PBL, project called “Coding Cadets,” in which students learned how to make videos, video games and interactive quizzes using Scratch code. One group made an animated video depicting the lifecycle of a butterfly, Bennett said, combining their own drawings with preset characters (called “sprites”) and using code commands to ensure their caterpillar emerged as a butterfly.

“‘Scratch’ is a perfect name for the program,” said Bennett. “Kids start with a white screen and they have to design everything. We talk a lot about the fact that the program doesn’t know what to do until you tell it what to do.”

Teaching other students their newfound coding skills is an extension of that original PBL project, she explained.

On a recent morning, Bennett’s students burst into Jessica Liming’s second-grade class with laptops and mouses under their arms. The third graders settled in next to their second-grade partners. Eighteen monitors flew open, already loaded with Play Lab, a series of progressively more difficult coding puzzles, and 18 second-grade hands hovered over the mouse. Third-grade hands stayed in the background, though, as the older kids remembered to follow Bennett’s instruction that they not touch the mouse or computer, but instead guide their younger peers using just words.

“Now add another ‘left,’” Cali Jones suggested to her partner, Solomon Kemper, who was stacking blocks of code on the right side of the screen in order to make the characters on the left side move and, eventually, speak.

“We’re learning how to make games and stuff like Minecraft,” she explained, referring to a popular kids’ video game.

At that, Solomon leapt up from his seat.

“I love Minecraft!” he said.

Mina Brown, a second grader, was also engrossed in stacking blocks of code to make her characters glide across the screen. Anah Smith, her third-grade helper, offered a few pointers, but mostly watched the younger girl. Asked later what she learned about coding, Mina replied, “The higher level you get to, the more complicated” the puzzles become.
High tech though the lesson was, the morning was not without a touch of old-fashioned magic.

“I learned how to make a person invisible,” announced Lily Knopp, drawing gasps from her follow students, and a few “How did you do that?” queries.

Asked what she’d gleaned about teaching, third grader Trinity Edwards said, “Sometimes it’s pretty hard to explain things.” But she loved coding, she added. “You get to make all your own things, which is cool.”

The activities look a lot like games, but they’re games from another vantage point, according to Bennett.

“There’s a lot of problem-solving involved,” she said. “Coding is a foreign language, but it’s also a different way of thinking.”

The code the students were learning and teaching is made up of blocks of commands that have to be put in a particular order for anything to actually happen on the screen.

“Code has to be really, really specific,” explained Bennett.

One of the “unplugged” activities she had the third graders do to prepare them to think like coders was to guide a partner in drawing a scarecrow without revealing what was being drawn. Instead, students used only incremental, specific directions to help their partners slowly build up the right image — just as you would do if you were programming a computer.

“There’s a lot of critical thinking involved,” said Bennett. “You have to stop and think how things actually work on a step-by-step level,” she added.

Bennett believes coding is critical preparation for the future, regardless of whether kids go on to become computer programmers. Principal Matt Housh agreed.
“This is something we know is really important,” he said.

The school has wanted to participate in Hour of Code since it was launched two years ago, Housh added, but sought a way to “actually lift it off the ground.” Bennett’s interest in coding and her PBL project gave the school the push — and in-house expertise — it needed.

Third-grader Mateen Sajabi certainly sounded like an expert last week. He explained how in his original PBL project, he’d transformed a series of “old-time games” like “Pac-Man” and “Donkey Kong” (some of the early video games from the 1980s) into new games. Asked how a person could accomplish such a feat, he gave this reporter a polite but pointed look.