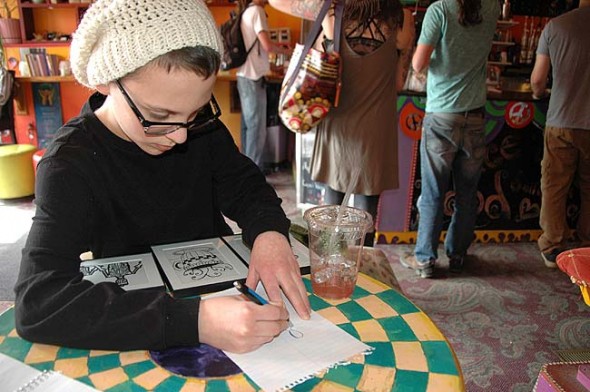 Young artist Christian Salvatore demonstrated his sketching skills at the Spirited Goat last week. On March 5 through the end of the month, the coffeehouse will host a show of his “zentangle” artwork. Pieces will be for sale (pay what you believe they’re worth) and proceeds will support Christian’s attendance at a computer coding summer camp at OSU. (Photo by Audrey Hackett)

Young artist to show at the Spirited Goat

Artists thrive on café life, and local artist Christian Salvatore, 12, is no exception. Sitting at the Spirited Goat on a bright afternoon last weekend, he greeted with a casual “hey” café goers easily twice his age. One man stopped to examine several pieces of art Christian had arrayed on the table in front of him.

“Sweet,” the man said, lingering, then cruising to the counter.

All patrons of the Spirited Goat will have a chance to check out Christian’s art next month. Six of his “zentangle” pieces, all on the theme of community, will be on display from Saturday, March 5, through the end of the month. A small, informal opening will be held around 2 p.m.

Zentangles are “drawings that aren’t supposed to look real, but not like cartoons either,” Christian explained. “They’re made up of swirls and patterns that are not necessarily symmetrical.” The technique is a type of meditative drawing, which Christian learned from his mom, Jenny Good.

“He really got lost in it,” she said recently of his first experiments with the form about a year ago. Since then, Christian has been perfecting his art — and working toward this show, his second at the Spirited Goat.

“We show all art,” owner Michael Herington wrote in an email this week. “I do recognize [Christian] is very young to be showing and I love that we can do this with him.” He added, “It’s a shocker to some that he’s so young and good.”

The works on display are small black-and-white images outlined in thick black marker and filled in with delicate patterns. They depict themes related to community: for example, one image shows two ballerinas, one lifting up the other “because in a community you uplift each other,” Christian said. Good said her son worked “so hard” on the pieces, and Christian himself confirmed that he tried “to make sure they showed the best of my abilities.” But creating them was also fun, said the young artist who’s been drawing “since I was probably around two.”

“I like the way I feel doing it, and the satisfaction when I’m done,” he said.

All six pieces are for sale, though Christian prefers not to price them. His older sister, Holly Gillenwater, explained that he’s “like a hippie in that way — he thinks people should give what they think [the art] deserves.” All money raised will go toward a computer coding summer camp he hopes to attend at Ohio State, according to his mom.

Christian and his family moved to Yellow Springs about three years ago, from Springfield. The village instantly resonated with him.

“I like the atmosphere — the hippie atmosphere,” he said. His mom agreed. “He’s definitely found his place,” she said.

A couple of times a week, “his place” is the Spirited Goat. “It feels like family here,” he said. One of his zentangles depicts a coffee cup with enticing swirls coming up from the brew; that piece represents the community vibe he feels at the Dayton Street coffeehouse, Christian said.

“Christian is special to us. He is an awesome person — very talented and generally just fun to be around,” Herington wrote.

Christian plans to become an artist and a graphic designer. He’s already building his portfolio, according to Good, who homeschools and “unschools” both children, “let[ting] their curiosity fuel their learning.” Christian studies with local artist and art educator Sarah Strong, as well as spending hours at his art desk at home. Zentangles are one focus of his work, but he also sketches, does graffiti art and on summer days fills the sidewalks in front of the Spirited Goat with chalk drawings. (His “faceless person figures” are his “signature” chalk image, he said.) His favorite artist is currently Salvador Dali.

“I always like his bit of an eccentric look,” Christian said. “His clock looks like cheese melting in the sun.”

But, like all artists, Christian strives to develop his own style. “I start by looking at random artists’ drawings and adding my own techniques,” he explained. “I’m always trying to perfect my drawings.”

Herington believes Christian’s taste of café life at the Spirited Goat has aided that process.

“We have watched Christian grow as a person and artist.” Herington wrote. “He talks with the many artists who hang out here about art and I think it’s helped him grow his artistic mind.”