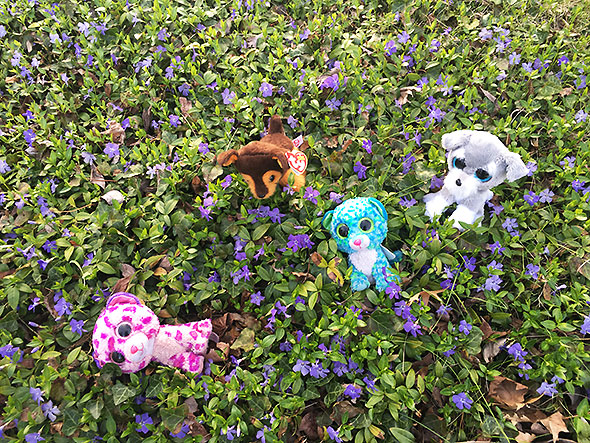 Mother Nature arrived a full day late with her April Fools joke. Saturday began sunny…a bright day with sky of wispy clouds. We got downtown early to visit the vendors of the Kings Yard and Corner Cone farmers markets. Stocking up on english muffins, salad greens, and fresh eggs, we drank in the sight of the village fruit trees blooming white and pink with the flowers of spring. 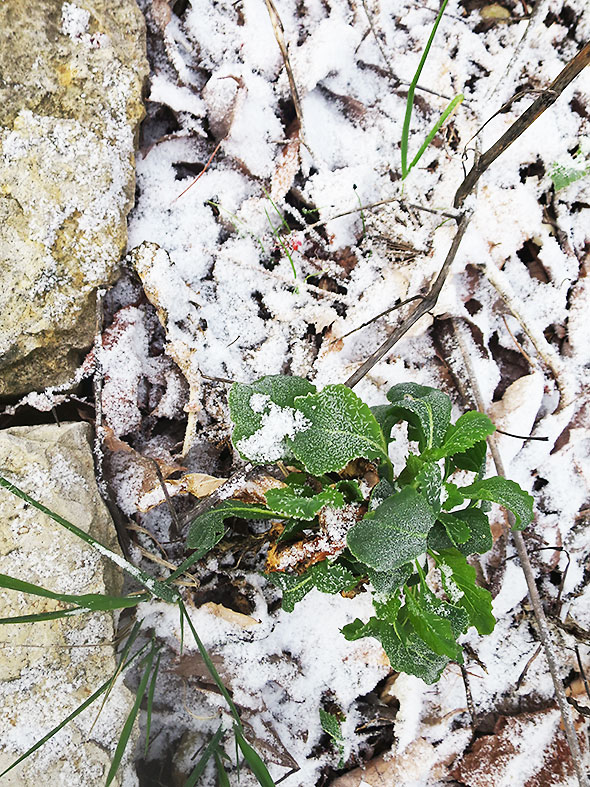 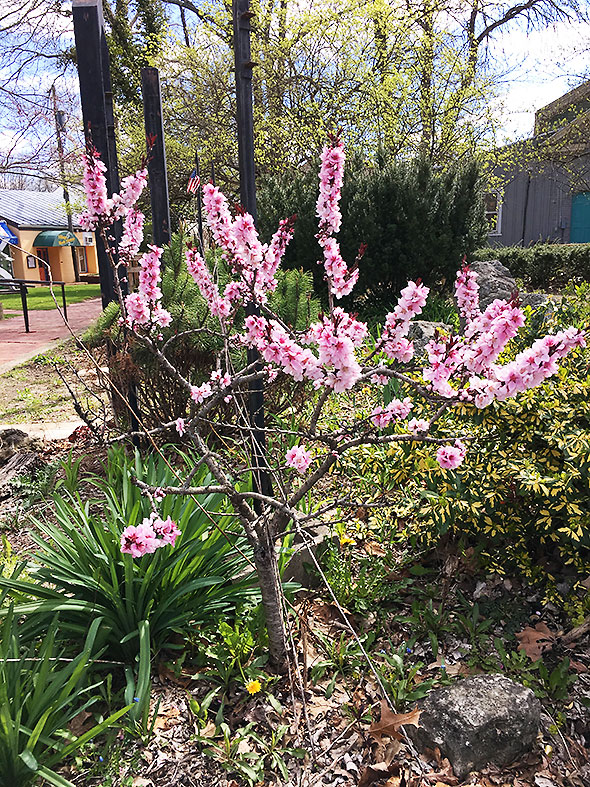 After lunch, we visited Antioch MidWest University to take in a screening of The Good Dinosaur with the kids. While we watch the film, a cold front moved into town. It brought high gusting winds that snapped large limbs off of trees. Hail fell with driving force. The hail storm blew itself out quickly but the weather still brooded. The pressure outside was so high we had trouble opening the university doors to the outside. We escaped the building and headed home. Along the way we passed Gaunt Park and stopped there long enough to sweep up a few of the downed branches billowing with apple blossoms. 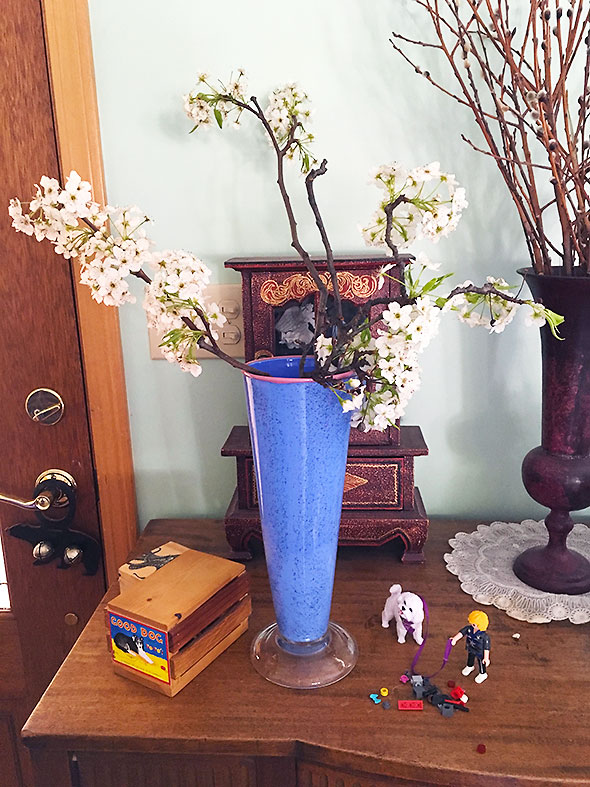 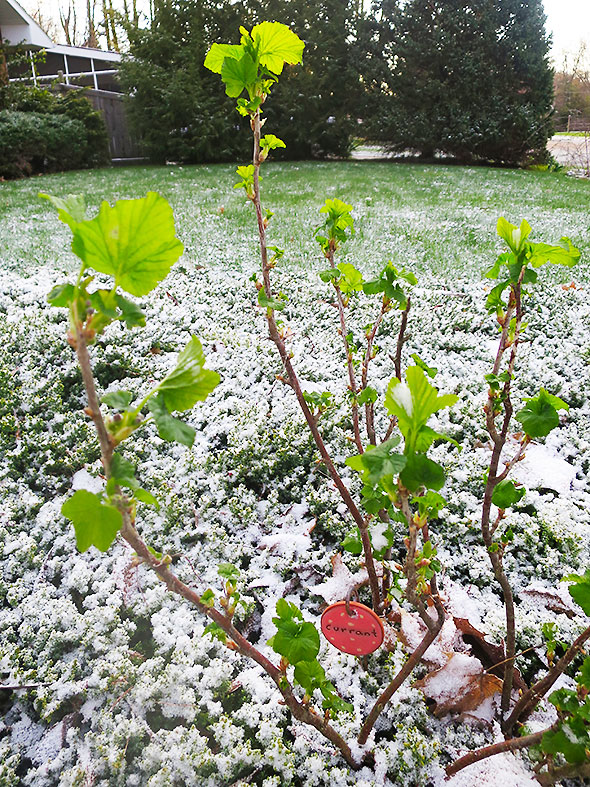 My husband received the blossoms with mixed feeling. Sure, they were beautiful but they were the pollen producing menace that was bringing on hay fever. He obliged my foolishness at bringing in the sworn enemy to sinus passages into the house. I was collecting vases when a second wave of weather crashed on the village. I watched the storm bend the three story high trees around the house at severe angles and children sent the children to the basement to play.

Later we would hear accounts about down trees around the area. One blocking the road at Hyde, another on Route 343. One heavily blossomed cherry tree bounced off the roof of a friend’s truck damaging the front window. Other friends had their trampoline pull free from its staked ground in the backyard and penetrate the woods behind their house. 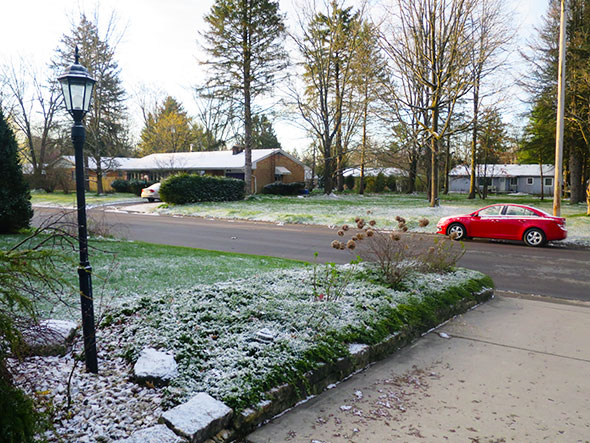 I’ve known nature to give us two feet of snow in April, so it shouldn’t be a shock to wake up to trees frosted white. But it is. Last year at this time we weren’t sure if the bracing cold would ever let go. This year we might wonder how well Spring and Winter get along set in the very same spot.

Once the storm blasted itself out, my husband took a turn around the property to look up and check for damage. The children resumed their play upstairs. In the last days of spring break, they arranged the living room into two classrooms. Their stuffed toys were invited to attend as students. Our son taught the younger group—kindergarden and first grade. He organized their schedule neatly: morning meeting, naptime, lunch time, playtime, and going-home time. He fit a math lesson in there also. Our daughter taught the older group—second through fourth grade. She spent time getting to know her students and making sure they were comfortable and that each one knew how to spell their names. The rules of the school were in dispute. Guns were allowed in the younger group but not in the older group. The younger group banded Giants finding them too scary at first. The students and their teacher debated the anti-Giant policy however and, once suitably armed, decided that the class decided they liked The BFG—Big, Friendly Giant—well enough to make an exception for him. 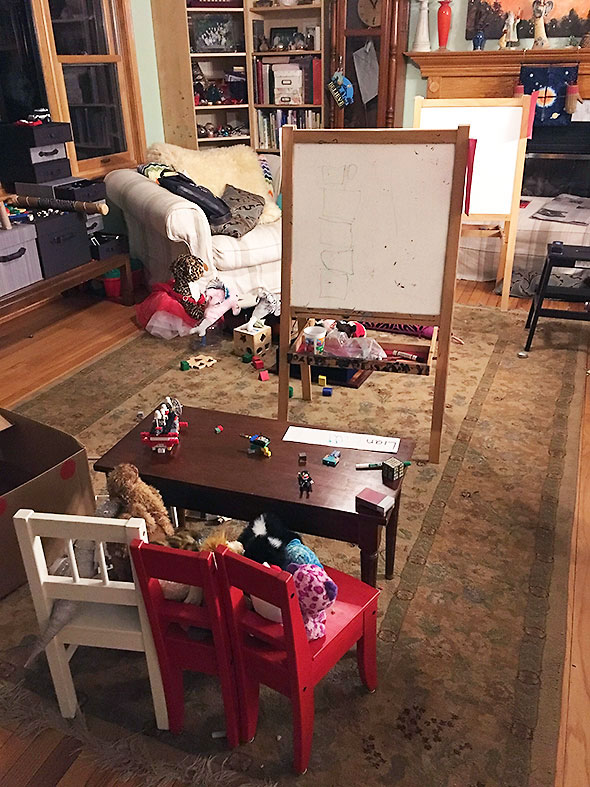 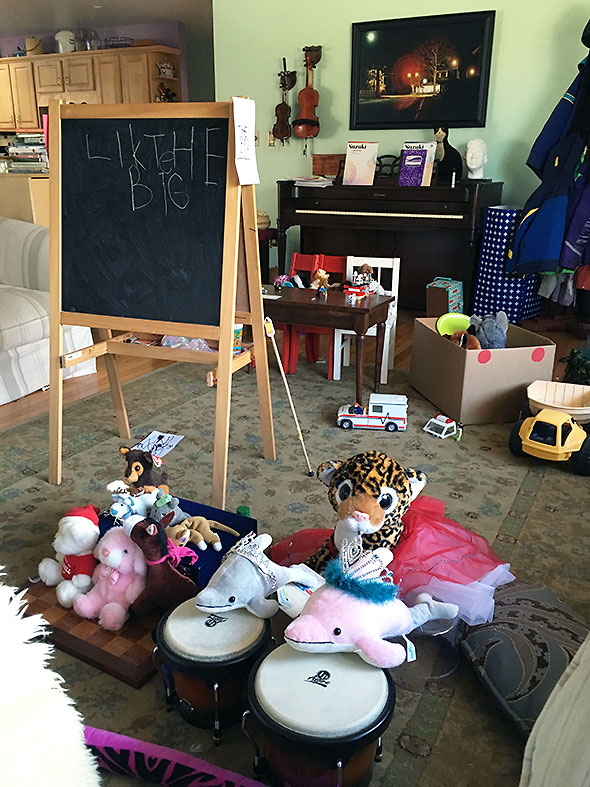 The trees around our survived yesterday’s storm. We breathed a sigh of relief as both my husband and I had unfortunate accidents with our electronics over spring break. While mixing my first Bloody Mary, the shaker flew out of my hand and crashed onto the kitchen counter. Or rather my cell phone that was sitting on the kitchen counter. My son reacted first shouting, “Your phone! Your phone!” The phone survived its dousing of tomato juice but its screen caught the full blow of the metal shaker at its home button. Around the same time, my husband spilled a small amount of liquid over his computer as it was tipped on its side. He was watch a video on the computer a short time later when computer suddenly announced that it was shutting down. A trip to the Apple Store at the green was in order. When we interrupted the children’s play on Friday, they quickly revised their class schedules. Soon we were loaded up for an impromptu field trip: the children with no fewer 37 stuff animals from the Toy Green School. 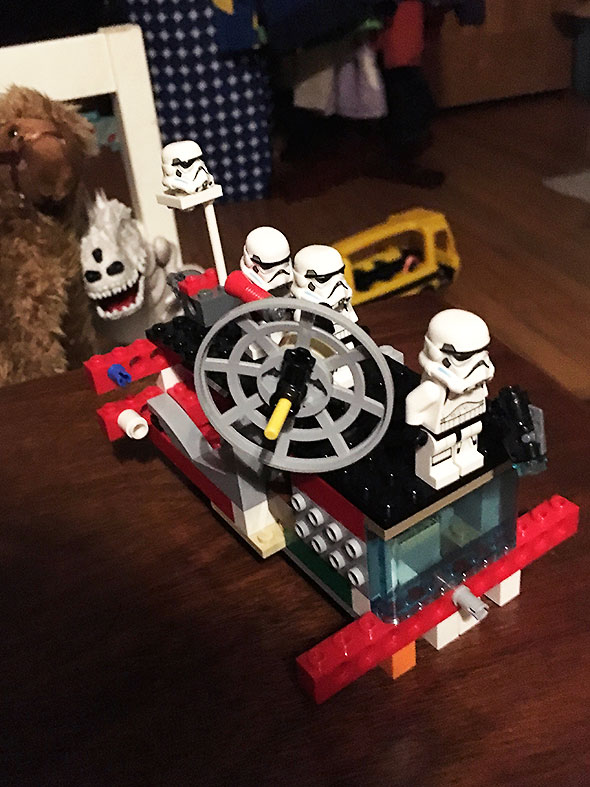 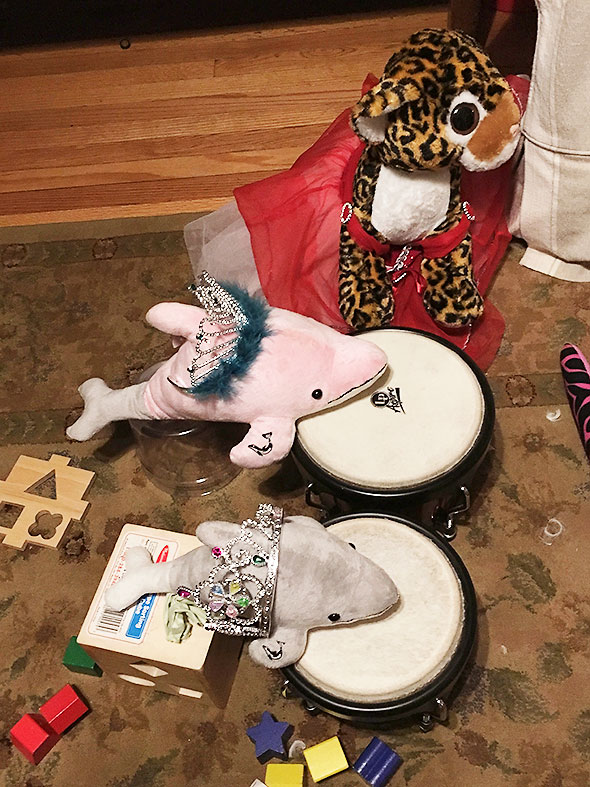 When we returned, two classes continued their exploration out of doors. They examined the many microclimates around the house. The giraffes lounged on the savannah of the front lawn. Cats and kittens nestled under the weeping Japanese maple. The camel checked out the dry desert of pine needles under our evergreens. The dinosaurs clambered over the primordial terrain of the rock garden. The jungle animals weaved themselves into a jungle of ivy.

Is it strange that the children are playing teacher while on Spring Break? I hope not. I see it as a sign that they enjoy their lesson in their respective elementary houses. They get back to those houses tomorrow. I hope they take the time to talk about Saturday’s strange weather, to share stories with their classmates about how the trampoline wound up topsy turvy, how this tree lost a branch as thick around as our waists, how we were all wearing shorts in the morning then winter coats and mittens in the evening. Strange forces have converge on the village in the first days of Spring and the last dregs of Winter. All that started out as a bad joke might still turn into a good story.