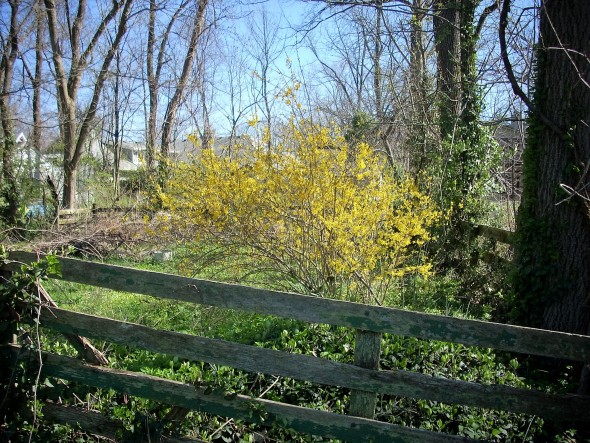 No fence can keep this color in. Forsythia bloomed in its paddock on Union Street this weekend. (Photo by Audrey Hackett)

When I was a child I called forsythia “for-Cynthia,” and I can’t deny I envied Cynthia, whoever she was, for having such a bright scribble of flowers named after her. Forsythia was a harbinger of spring, I heard the adults say, or rather misheard: “for-Cynthia” was a “har-bringer,” a gift tag sprouting from the wrapped package that was, and is, early spring.

Driving south on 68 a week or so ago, I saw Cynthia’s flowers everywhere: big trimmed hedges, wild tangles and my favorite — upward-shooting sprays, like flower-fountains frozen in mid-leap. In a landscape that’s rapidly greening, but still somber, the yellow bursts stir a pleasure it’s hard to overstate. My favorite glimpse was a blaze of forsythia growing up between two dark-clad Norway spruces. The spruces have always reminded me of a certain kind of minister or undertaker, while the yolky yellow interlude was like a kid’s laughter in a stern church: a reminder that life’s too serious to be taken too seriously, too precious for excessive preciousness. In other words: whimsy, informality, the light touch — all are proper forms of homage to the God or gods or godlessness of life.

The light touch can be hard to maintain; indeed, it’s exactly the sort of thing that can’t be “maintained,” only invited in, and delighted in, and not driven away. The light touch is not a lawn; it’s a native prairie. It’s forsythia in its (to me) best and proper form: bedhead-by-way-of-the-light-socket wild. The light touch is willing to laugh at its own misfortune, because it sees that absurdity is never far from tragedy, and because life is, well, just so huge and various and ever-changing that despair is never really warranted. Though despair, by its nature, hums a different, darker tune.

I once had a friend who, in the thick of many troubles, said, “Wow, this would be really interesting if it weren’t so awful, and weren’t happening to me.” And yet, even though it was so awful, and it was happening to him, he was able to laugh, just a little, at each fresh twist of the plot, or knife. It occurs to me now that his antidote to despair was curiosity — about the very experiences that were so painful, and about all the other experiences that might otherwise have slid by unobserved — and this seems like the best possible antidote to despair any doctor-of-the-soul could prescribe.

Or again: not prescribe, any more than lightness can be “maintained.” Curiosity is a function of noticing. If you notice, you can’t help but wonder about a thing or two, and once you do that, curiosity already has you eating from the palm of its hand.

Spring is a splendid time for noticing; it’s like Noticing 101, Noticing for Novices. Winter in its subtlety rewards the trained eye, but spring is the Labrador puppy of seasons, and you don’t have time to fail to notice before it’s jumping up and slobbering all over you. When I saw that spray of forsythia between the Norway spruces, I was noticing the obvious, but that noticing led me to thoughts and memories that moved and pleased me, including the memory of making my very own forsythia in the second or third grade. As I recall, we used little squares of yellow tissue paper and shaped them around a pencil eraser to create tiny floral detonations, and glued these onto construction paper where we had already drawn a forsythia bush, a clutch of bare branches awaiting flowers. And voila, several gooey bottles of Elmer’s later, every child’s paper — mine no less than all the others’ — was in golden bloom.

A light touch. It’s forsythia canes stirring in the wind. It’s sun that scatters squares and parallelograms on the back deck, islands of geometric warmth where the dog likes to lie. It’s the rattle of the window and the rap on the open door — a neighbor stopping by. It’s the tulips that hold together like a prim purse, until they don’t, and then they fall into beautiful dishevelment, ruddy-faced and kohl-eyed. “Har-bringers”? Perhaps. Better yet, everything that’s already with us, all around.