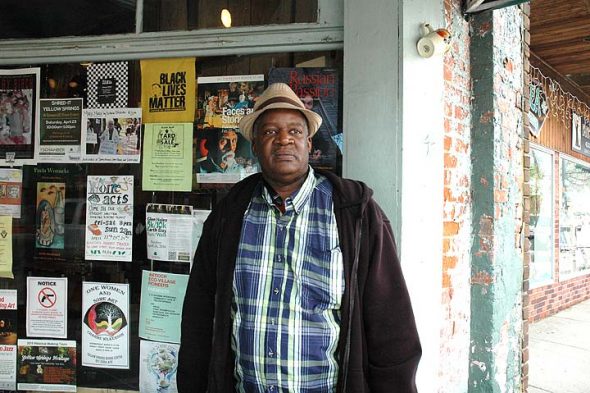 Villager Bomani Moyenda is leading a group of people, including several from Yellow Springs, seeking justice for the family of John Crawford III, who was shot by police in the Beavercreek Walmart in 2014. (Photo by Audrey Hackett)

The mood was somber at Antioch College’s Coretta Scott King Center last Wednesday evening. About 40 people, including representatives of several area media outlets, gathered to hear local activist Bomani Moyenda and the Reverend Jerome McCorry, of Dayton, respond to the latest developments in the 2014 Beavercreek Walmart shooting case, in which 22-year-old John Crawford was shot by Beavercreek police while casually handling an air rifle (used for target practice and hunting small game) sold at the store. A 911 caller, Ronald Ritchie, reported that Crawford was waving and pointing a gun at people. Police shot and killed Crawford within seconds of arriving at the Walmart.

“Let me first say that my heart goes out to the family of John Crawford III for once again being stiff-armed, dehumanized and spat upon by members of the legal system,” Moyenda began, reading from a prepared statement. He went on to denounce the appointment of Special Prosecutor Mark Piepmeier to consider evidence against Ritchie, and to protest Piepmeier’s decision, announced on April 18, not to prosecute the 911 caller.

Piepmeier had previously served as prosecuting attorney in the 2014 grand jury hearing that acquitted the Beavercreek police of wrongdoing in the Walmart shooting. But Piepmeier had functioned as the “de facto defense lawyer” in that hearing, said Moyenda on Wednesday, adding that “at no time did [Piepmeier] advocate for the innocence of John Crawford III.” Following the 2014 grand jury acquittal of Beavercreek police, Piepmeier publicly characterized Ritchie as someone “trying to be a good citizen, reporting as best he can, what he’s seeing.” That prior statement should have disqualified Piepmeier from involvement in weighing evidence against Ritchie, said Moyenda on Wednesday.

Throughout the press conference, Moyenda and Rev. McCorry spoke forcefully to a sympathetic audience — comments such as “Well said” and “Yes” punctuated the two men’s remarks — about the failure of the justice system to hold anyone, including Ritchie, accountable for Crawford’s shooting.

Rev. McCorry, a spokesperson for the national Stop Mass Incarceration Network, contended that “Ohio is becoming ground zero for police murders.” One audience member stood up and said that his research into the issue indicated that “black people are six times as likely to be killed by police in Ohio.”

“When will black folks whose lives have been taken by police get justice?” Rev. McCorry asked.

Moyenda, a Yellow Springs resident, has led a recent effort to press charges against the 911 caller. On March 25, Moyenda and eight other people, a majority from Yellow Springs, filed affidavits with the Fairborn Municipal Court charging Ritchie with a variety of crimes connected to the 911 call, according to online court records.

Under section 2935.09 of the Ohio Revised Code, private citizens having knowledge of an offense may file an affidavit with a court, which triggers a review by court officials. This section of the Ohio code was used by activists in the case of Tamir Rice, the 12-year-old shot by Cleveland police. Moyenda modeled his affidavit submission on that case, he said in a follow-up interview on Friday.

“We filed those documents as a group of concerned citizens,” explained Moyenda, who has been deeply involved in efforts to seek justice for Crawford since the shooting, including the 2014 Xenia courthouse vigils, demonstrations at the Beavercreek Walmart and elsewhere and this most recent push to hold Ritchie accountable for what activists see as his 911 misstatements. Yellow Springs residents have played “the largest role” in all these efforts, Moyenda said. Crawford’s shooting spurred the formation of the local Black Lives Matter group, but as that group has lost momentum locally, Moyenda and others have continued pressing for justice under the banner of “Justice for John Crawford III.”

“I refuse to let go of what originally brought us together,” he said on Friday.

The nine affidavits were submitted to the Fairborn court with video evidence from Walmart surveillance cameras, which the FBI synced with the 911 audio and released in 2014. Moyenda and other activists believe that the combination of video and audio highlights stark discrepancies between Ritchie’s eyewitness account and the actual surveillance footage. The video, said Moyenda on Wednesday, is proof that Ritchie lied.

“[Crawford] was set up by a pack of lies and gunned down by a trigger-happy cop,”  he said.

After reviewing the affidavits and video evidence earlier this month, Fairborn Municipal Judge Beth Root found probable cause to prosecute Ritchie on one of the affidavit filers’ charges, making false statements. She referred the case to the office of Fairborn prosecutor Betsy Deeds. It was Deeds’ office that, in a controversial move, appointed prosecuting attorney Piepmeier to review the video evidence.

In Friday’s follow-up interview, Moyenda said, “I’m really appreciative of Judge Root in Fairborn for having the courage, despite political pressure, to make that determination.” At the same time, he suspects — though he can’t prove — possible interference from Ohio Attorney General Mike DeWine’s office in the appointment of Piepmeier.

“They would have to admit they were wrong,” Moyenda said of the officials in the case. “Judge Root’s determination put them on the defensive.”

Moyenda also decried public statements by Piepmeier, DeWine and others that prosecuting Ritchie would have a potentially chilling effect on citizens’ willingness to make 911 calls. That, he said, is a distraction from the real issue.

“Ritchie lied during the phone call and if you stick with the truth you won’t have a problem,” Moyenda said.

M.J. Gentile, also of Yellow Springs, was another affidavit filer and an attendee at Wednesday’s event. She has been active in the movement since taking part in the 2014 vigils.

“It was so clear when I saw the video evidence that John Crawford was innocent,” she said on Friday. The 911 call was “a series of lies.” Her decision to file an affidavit was “tough because I don’t like the criminal justice system — I don’t like the idea of sending someone to prison.” But in this case, the injustice “is so obvious, like Emmet Till,” she said, referring to the African American teenager lynched in 1955.

Gentile, like Moyenda and others, sees the Crawford case as emblematic of the “racism that permeates society.” The fact that “white people see black people as criminals” underlies shootings of young black men around the country, she believes. The country needs “real systemic change … to unlearn racism,” she said. “We have a long way to go in Yellow Springs and throughout the country in seeing each other as equals and treating each other fairly.”

‘We shall not be moved’

That sentiment was echoed by Reverend Aaron Saari, who attended Wednesday’s press conference and asked how black and white churches could play a role in seeking justice for Crawford.

Churches are the “sleeping giant,” replied Rev. McCorry. “We must come awake.”

In an email last week, Rev. Saari, who is pastor of First Presbyterian, said his church would continue to show support for local protestors’ efforts. And he said the push for justice in the Crawford case is also about “a larger movement to create justice within our communities,” including Yellow Springs.

“The spiritual issue here has to do with recognizing intrinsic personhood; we are all created in God’s own image. Sadly, our non-white brothers and sisters are disproportionately attacked, killed and neglected by the systems set up to protect and serve,” he wrote.

By the end of the press conference, Moyenda sounded a bit weary, but resolved. “We will continue to research avenues that lead to justice,” he said. “We shall not be moved,” he added, quoting an African American spiritual.

On Friday, Moyenda spoke of having made a commitment to Crawford’s parents to pursue justice “as far as we can go.” The “passionate pain in their faces and voices” moved him, he said.

“I have two boys, I have grandsons. I can’t imagine the pain of having a child gunned down and the thrust of a legal system to justify it.”

He declined to specify next steps — partly out of fear of “sabotage,” he said — but confirmed that he was seeking avenues through the legal system, as well as “other ways to continue to apply pressure.”

Meanwhile, the federal investigation into possible civil rights violations in the Crawford case is still ongoing; Benjamin Glassman, recently appointed the Acting U.S. Attorney for the District of Southern Ohio, has taken up the case. And Moyenda said he is seeking ways to “achieve more national attention.” Rev. McCorry may help with that. At Wednesday’s press conference, he announced that, as part of his work with the Stop Mass Incarceration Network, he plans to arrange for a national touring group of mothers and families of African Americans killed by police to make a stop in the Dayton area in June.

The bottom line, as Moyenda sees it, is that a human tragedy has been compounded by a gross and continuing miscarriage of justice.

“A kid gets killed and you have a legal system that figures out how to get away with it,” he said.