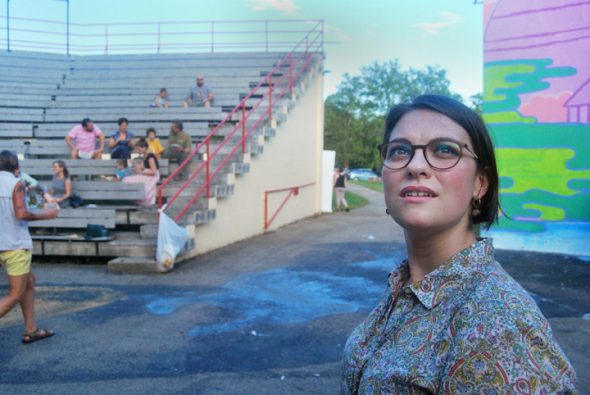 Margaret Hild, a long serving member of the YSKP soaks in the memories of bygone shows. (All photos by Aaron Zaremsky)

A Generation Apart — The YSKP Alumni

The playhouse, founded in 1995 by John Fleming, began as a youth theater program and has since put on annual productions of original musicals, incorporating the work of local and nationally recognized playwrights such as Tony Dallas and Louise Smith. Productions include, but are not limited to: Homer Price, The Arabian Nights, Guided by a Star and The Conference of the Birds — all original works with original music composed by names such as Tucki Bailey and words crafted by Daniel Malarkey from the famous Malarkey “clan.” (Many other contributors in each field with too many names to list.)

At a recent event that extended invitations to alumnus of the many seasons, I asked Margaret Hild of Toronto what her experience with the YSKP did for her professional and also her personal life. Her response was reflective and carefully worded, as she had a great deal of respect for the program and wanted to make sure she accurately communicated how it had shaped her life. She told me that since age six, she had not gone a year without acting. She had driven all the way from Toronto to the alumni gathering because her “roots were overdue for some watering.” She told me she had been an emotional and empathetic child, and the program, and theater in general, has helped her channel her empathy in productive ways. Having so much stage experience has also helped her with high-stress jobs in the service industry where she needs to know the best option for any given circumstance. She has said the experience on stage has also helped her deal with social anxiety.

I am also an alumnus of the Yellow Springs Kids Playhouse and have nothing but positive things to say of my experience. John Fleming (now retired) has always been magical with his direction and learning the words to Tucki Bailey’s melodies was great fun. As the great Bard said, “All the world’s a stage,” so I cannot say I came unscathed out of the YSKP experience without a little bit of confidence building. Social situations, professional skills and experiences that I may not have otherwise gone into boldly are a breeze thanks to my experience.

The oldest alumni now have children of their own and have even written and directed their own YSKP productions. The alumni have become a generation apart. Many have remained in theater and have done very well in the professional world. Could they have taken another route and bypassed the YSKP experience all together? Perhaps, but it’s unlikely they would have ascended to the heights they are now. It was quite the ride.