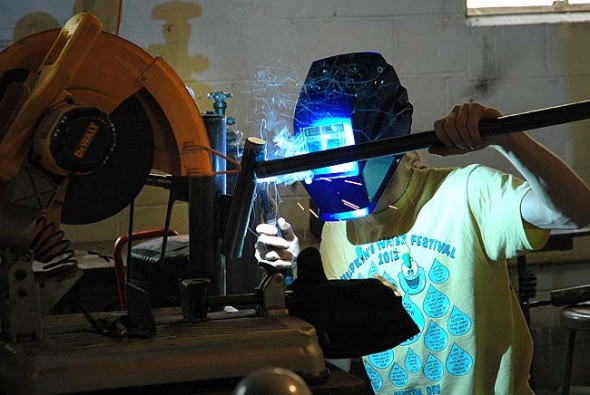 Third-year student Dustin Mapel welds the arm for the turbine in the campus shop, where YS Kids Playhouse was located over the summer. (Photo by Lauren Heaton)

As an extension of a Global Seminar on sustainable energy, Antioch College hosted a workshop last week on how to construct a wind turbine. Renewable energy expert Dan Bartmann from Buckville Energy in Colorado led the one-credit class attended by two international students and nine Antioch College students during their one-week tri-mester break. Within a week the class had constructed a 10-foot diameter prototype with a 1-kilowatt alternator that, given average wind speeds of 12 miles per hour, should be able to generate about 150 kilowatt-hours of energy per month. To function property, the turbine should be mounted on a tower at least 30 feet above the treeline and 500 feet away from any obstructions. But the cedar prototype will likely be erected  somewhere visible on campus for education purposes. Math and physics professor Barbara Sanborn hopes to have future students scale the model to create larger turbines.

Third-year student Marshall Gravely-Novello said he took the workshop because he’s interested in knowing how to “make your own energy sources and being liberated from the reliance on forces of the economy that we have no control of,” he said.