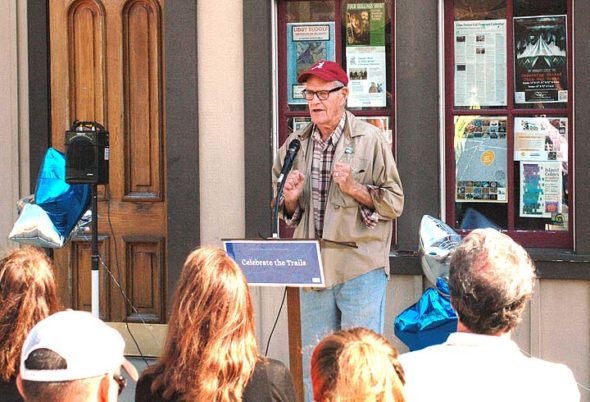 Ed Dressler spoke to a small crowd at last Saturday’s 25th anniversary celebration of the opening of the local portion of the Little Miami Scenic Trail. Dressler and Marcia Sauer were honored at the event for their pivotal role in making the local bikeway a reality. Former Village Council member and trail proponent Connie Crockett organized the celebration. (Photo by Audrey Hackett)

Once controversial but now widely used, the local bike path turned 25 this fall. A small ceremony marking that milestone was held in front of the Train Station last Saturday, organized by former Village Council member Connie Crockett, a bikeway booster from the start. As she and other officials and trail enthusiasts spoke about the path’s history and impact, cyclists and walkers streamed by — perhaps the best evidence of the ultimate success of our local portion of the Little Miami Scenic Trail, a 73-mile paved path that runs between Cincinnati and -Springfield.

The Yellow Springs segment of the trail — 10.2 paved miles between here and Xenia — was dedicated on Sept. 13, 1991, at the Xenia Station, and again on Oct. 12 of the same year in Yellow Springs. Those who worked hard to bring the local trail into being remember the satisfaction of cutting those two ribbons and opening a recreational corridor where previously a railroad had run.

“They discontinued the iron horse and we replaced it with the aluminum pony,” said Ed Dressler, former longtime head of Greene County’s parks system and a passionate advocate for trails, in an interview earlier this month. Dressler was one of two villagers honored at Saturday’s event for playing a pivotal role in bringing the new “aluminum pony” route through Yellow Springs. The other honoree was Village Cyclery owner Marcia Sauer; she and her late husband, John Spariosu, bought the business in 1986 and championed cycling locally as “transportation, recreation and exercise,” Sauer said.

In the late 1960s and early 1970s, as the nation’s once-mighty railroads shut down their operations and sought to sell thousands of miles of rights of way, the idea took hold of turning those former transportation corridors to new use, according to Dressler. Several railroads crisscrossed the Miami Valley, with the Little Miami Railroad formerly connecting Cincinnati and Springfield. And so the work began of buying, segment by segment, abandoned corridors from the railroad company and converting them to recreational trails.

There are currently 330 miles of trails in the Miami Valley trail network; the largest single trail in the system is the Little Miami Scenic Trail.

Like all trails in that system, the Little Miami was cobbled together piecemeal, with collaboration among multiple individuals and agencies at the local, state and federal levels required for any one piece of the trail to be acquired, funded, built and maintained. “Cooperation between people — that was the key,” recalled Dressler. Local advocacy often proved essential to the overall project’s success. For example, he said, the local bike path never would have materialized without the Friends of the Trail group, started by Marcia Sauer and others, including the late Milt Lord.

“Without this group, the project would have failed. And without Milt, it would certainly have failed,” Dressler said.

The local project got started when the Village purchased a major portion of the Xenia–Yellow Springs corridor in the early 1980s, thanks in large part to a then-anonymous gift of $50,000. Only years later were the donors revealed to be local residents Ruth and Tony Bent. The trail remained unpaved until 1991 — and its paving almost didn’t happen.

That story reveals the complexity of the project. In nearly every community involved in the Little Miami Scenic Trail’s creation, the local segment of the trail drew ardent support and equally impassioned opposition. Yellow Springs was no exception, though many assumed the project would be a natural fit for the town.

“We thought Xenia was going to be hard,” said Dressler. “But it was the other way around — Yellow Springs was hard.”

Those who supported the bike path “dragged it into Yellow Springs,” Crockett confirmed. “It didn’t just happen.”

Crockett was a Village Council member at the time. In May of 1990, she cast one of three votes that brought the local bike path as we know it — an asphalt-paved trail 10 to 12 feet in width with grass shoulders — into being. Many in the village supported the bikeway, while others opposed it, worried about its environmental impact on Glen Helen, a possible rise in trespassing and crime and the trail’s potential to fundamentally alter the character of Yellow Springs by bringing more tourists to town, Crockett recalled. (The Glen’s longtime director, Ralph Ramey, supported it, as did Antioch College’s president, Al Guskin, at the time. Many Antioch students were opposed.)

The push to pave the path was the final showdown. The News recounts a tense and thrilling bout of civic participation on May 9, 1990, when about 135 villagers turned out for Council’s vote. Forty-three villagers spoke on the issue, 35 in favor of a paved trail, according to the News report on the meeting. Two Council members, Crockett (then Connie Gahagan) and Hazel Latson, were in favor; two, Tony Bent and Doug Hinkley, were opposed. (Though Bent supported the idea of a recreational trail, he opposed its paving at that time. And Hinkley had been elected to Council on an anti-bikeway platform.) Newly elected member Roy Eastman was the swing vote. He was persuaded by the passionate public testimony and switched his initial “no” to a “yes” in the final vote.

The testimony of local wheelchair-bound people, notably David Wishart, was particularly persuasive, said Dressler. An asphalt trail provided access for as many potential users as possible, supporters of paving the path believed.

With Council’s split vote, the trail was paved, and in most quarters opposition gave way to enjoyment.

“My view of the trail changed,” Bent said recently. “It’s well used not only by bike riders, but by people on skateboards, by hikers and by people on horseback” — the latter being a unique feature of the local path.

“I do believe by the time of the ribbon cutting, there was great buy-in in the community,” said Sauer. “From the onset it was immediately integrated into the fabric of Yellow Springs.”

So much so that for newer residents, it’s hard to imagine the town without the bikeway. Eric Oberg moved to the village two years ago with his family, and the trail was a definite draw, he said. Oberg happens to be the director of trail development at Rails-to-Trails Conservancy, which champions rail trail projects like the Little Miami Scenic Trail. The Midwest regional office moved to the village from Columbus last fall — further proof that Yellow Springs has become a committed trail town.

“Fears at the time were understandable, but they never came to pass,” Oberg said, though the bike trail, in combination with other factors, has certainly drawn many more tourists to Yellow Springs. In his view, the trail has been a boon to the village. Trail counters record some 70,000 to 100,000 uses of the local trail each year; the number of individual users is smaller (“uses” are simply bodies passing by an infrared sensor) but substantial. A 1999 economic study of the southern portion of the Little Miami Scenic Trail, outside Cincinnati, found that the average trail user spent $15 per visit, an economic impact that is surely higher now. And then there’s the hard-to-quantify effect on human health and well-being, as well as the positive environmental impact of traveling by bicycle rather than car.

“For all these reasons, we owe a real debt of gratitude to those who fought for the trail,” Oberg said.

Any trail network is only as good as its weakest link, said Dressler, who made sure, locally and in Greene County, that every link was strong. Long retired from the county parks department, Dressler remains passionate and knowledgeable about recreational trails, noting with delight that the final 1.2 miles of paved path to Springfield’s center, contemplated for years, had finally been completed last month.

“We finished what we started,” he said.