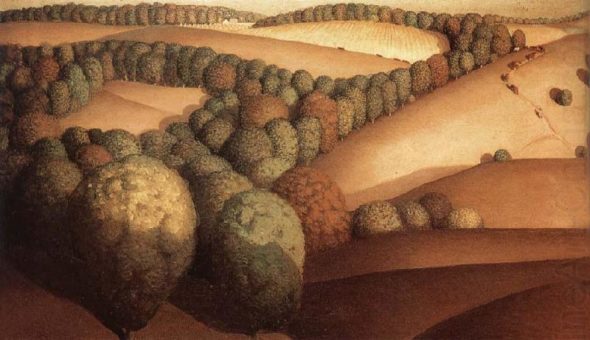 "Near the Sunset," by Grant Wood, date unknown. Via Wikiart.

In the wee hours of Wednesday morning, the words of a fine Norwegian poet came to mind: “It’s not all as evil as you think.” Rolf Jacobsen was writing on the cusp of our modern age, an age that would see many evil things, but he persistently turns our notice to the moon, the sea, the faces and hands of the very old. Not the goodness of the world, exactly, but its luminous presence.

He does not deny or ignore the evil of the world — in one poem, swallows fly “like the silent strokes of a whip” through old towers built by slaves — but he affirms the world, evil and all.

This is the spirit I would like to bring to Trump’s triumph.

I admit my first reaction was disbelief; my second, tears. I sense terrible things, real and lasting harms, will come from Trump’s election. How can it be otherwise, given the candidate’s own actions, own words?

I reject, vigorously reject, his cry to “make America great again.” I reject his vision of what “great” is, what “America” is, even what “again” is. (I would reject “make,” but I find it a useful, inoffensive verb.) The backward look — the longing for what was, which is always the longing for what never was — is the most dangerous pose a person or a nation can strike, I believe. Dangerous because it is fundamentally false. Restoration of lost greatness is a sham. It is a crime against time itself. It never, ever works.

Trump may well have cured me, all in one night, of my personal nostalgia. I see it for what it is: delusion.

This nation does not need a return to greatness. It needs, instead, a return to the present and to its senses. Nostalgia is both ahistorical and anti-present; it denies the realities of the past while closing our eyes to the crucial contours of the present day. And it posits fixes for a future that will never come …

Trump tapped a deep well of anger, anxiety and alienation in the heart of the nation. The literal, geographic heart, where we in Yellow Springs live. The Midwest (if not our little village!) fell for Trump last night, and I mean that in both the domino sense and the sucker-born-each-minute sense. This man, this would-be king, is hollow. In his echo chamber, we can hear ourselves scream — and that may be one key to his appeal. He is not a candidate — now, incredibly, the president-elect — for the wise or kind parts of us, but for the small and shrill parts that feel neglected, misused, ignored. These feelings are potent. But they are not productive. They lead us down dark roads.

Still: it’s not all as evil as you think. The world is here, in and all around us. The apocalypse, too, is a kind of nostalgia — “nostalgia for the future,” you might say, a longing for the final, shining “better day.” There is no better day, dear villagers, dear voters. There is only this day.

Let the young rain of tears come.
Let the calm hands of grief come.
It’s not all as evil as you think.

—From “Sunflower,” by Rolf Jacobsen, trans. by Robert Bly

2 Responses to “BLOG— On Trump’s triumph”