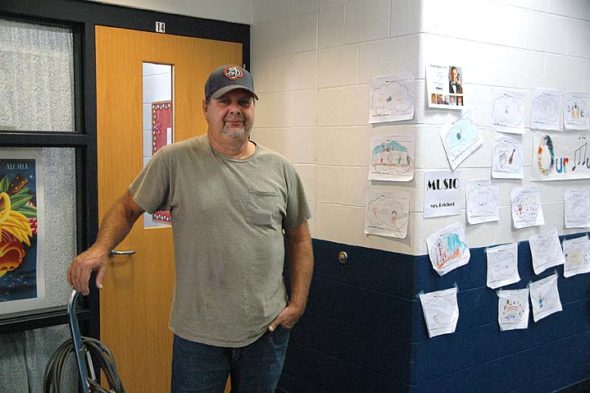 Yellow Springs school district’s long-time custodian Jerry Upton is retiring after 30 years on the job. His tenure with the school has had him driving buses, doing groundskeeping work and working in long-gone buildings. He has learned in a number of different skills via a number of different positions, and still gets greeted warmly by students who have long ago graduated. (Photo by Dylan Taylor-Lehman)

School’s out for district janitor

About halfway through the school year, the district will say goodbye to one of its senior-most employees, and he will say goodbye to the employer he has had for the past 30 years. Longtime custodian, groundskeeper and bus driver Jerry Upton is retiring after decades of service to the Yellow Springs schools. Upton began working for the district in 1987 and has spent time in the schools with many Yellow Springs luminaries. He has learned a number of different skills via a number of different positions, and still gets greeted warmly by students who have long ago graduated.

Upton’s history with the district attests to the passing of time, as he began his career in a facility that no longer houses a school: the Morgan Building, which at the time served as the area’s middle school. He answered a call for a school janitor at a time when there weren’t many jobs. “Reaganomics,” he explained. He needed to take what jobs he could find to support his family, and wasn’t sure how he’d take to working at a school. But he started as a janitor, got used to it and determined it was not that bad. He made the leap to the high school as a groundskeeper when the Morgan Building was sold in 1988.

There began Upton’s 16-year stint as groundskeeper. The job and its attendant duties were somewhat new to Upton, and the scope of the job was no small matter. The district’s grounds encompassed 50 acres, 25 of which needed their grounds kept. “But I wasn’t afraid to work hard,” Upton said, and he dove in and learned what he could from his more experienced comrades. He found he really liked being outside, and the schedule allowed him time to watch his kids and attend a lot of their sporting events. Upton currently lives in Cedarville with his wife.

It was during his tenure as a grounds-keeper that Upton’s life took a turn for the scary and miraculous. In the winter of 2002, Upton went out in three feet of snow to go sledding with his kids. Playfully and perhaps ill-advisedly, he tried to go down the hill using his sled like a snowboard. The stunt resulted in a terrible accident, in which Upton was badly hurt.

“My leg touched my head,” he said.

Doctors found that an artery in his leg was twisted and had suffered such damage that that there was talk that he might lose his leg. Not only was this a terrifying prospect for any human being, but it had the potential to disrupt his career, and he was frightened that the accident would derail his ability to retire.

But an incredible opportunity fell in his lap, he said, that was able to save his leg and his job. As it happened, a friend of the family read on the internet that a doctor in Columbus was looking for people to take part in nascent stem cell research. Upton and his wife did a little more research and found that he qualified for consideration for the “stem cell experiment.” He and his wife scheduled an appointment and drove to Columbus for a consultation.

The doctor began by laying out the options for surgery and rehabilitation. During this conversation, Upton politely interrupted him, leaned in conspiratorially and said they were there about the stem cell experiment. “Oh,” the doctor said. “Of course.”

As it turned out, the doctor wasn’t allowed to offer the experiment as a treatment option; the patient had to ask. Upton was ultimately scheduled for the procedure, which involved sticking a “two-mile-long needle” into his hip and extracting bone marrow. The stem cells were separated and injected into his leg. Though he was knocked out for the procedure — “I’d never been twilighted before,” he said — he was allowed to go home after a fairly basic treatment. Upton said he could tell the procedure was working when the hair started growing back on his leg. Incredibly, the procedure and all of the follow-up consultations have been paid for; all he had to do was agree to let his case be featured in a medical journal.

The treatment proved a success and allowed him to return to work for the school district. Though he wasn’t able to continue working as a groundskeeper, a maintenance and janitor position was available at the high school, which he promptly took. Once again, he dove into the job’s duties, learning about the nuances of building maintenance from longtime maintenance man Craig Conrad.

Upton currently works the 2–10:30 p.m. shift at Mills Lawn. His routine includes mopping, trash removal and general building maintenance. Though he does a significant amount of cleaning, he distinguishes his nightly duties from the deep cleaning done to the buildings over the summer and spring and winter breaks, in which furniture is hauled out and the building is cleaned from top to bottom. Elementary kids love to run around outside and play in the mud, he said, so it’s more practical to maintain cleanliness during the school year than to thoroughly scour the building every night. He always starts on one end of the building and works his way down, and especially appreciates listening to WYSO blues programs because the music sounds really good with the acoustics of the building. Upton also functions in a security capacity, keeping an eye on kids as they leave for the day, and watching out for traffic.

At this point, he said, he could be put into a dark classroom and know exactly what room he is in, where every piece of furniture is and all of the room’s quirks. Being in a vast, empty building with all of its mysterious creaks and pops is sometimes unnerving, though he is also fairly familiar with all of the different late night building groans.

On-the-job hazards include the frequency of flu among students, though he said he likely has built up some immunity after working there over the years. He has also had to get used to the stereotypical school custodian’s duty, cleaning up kids’ puke. At first he didn’t know if he could do it, he said, as he was no less grossed out by vomit than anyone else is. The same can be said for bathroom cleaning duties. But after enough time on the job and a number of seminars on hazardous materials, it became just part of the job, though never a particularly pleasant one.

“I’ve got horror stories,” he said, shuddering and shaking his head.

Despite the amount of heavy lifting required to do the deep summer cleaning — “that’s why we’ve all got big arms here” — summers as a custodian have been especially fun, Upton said, as the custodians would play pranks on each other. Once in a while someone would find his bike run up a flagpole, or be drenched on the sidewalk when a bucket of water dumped on them from a window above. Upton had his hatchback filled with trash cans on more than one occasion.

In addition to his janitorial work, over the years Upton has worked as a bus aide and then as a substitute bus driver after getting his bus driver’s license. One highlight of that job was student pranks. Early into his stint as a bus driver, when he was still learning the bus routes, he found he wasn’t sure which turns to take. In his desperation, he asked a student on the bus for help. The student wanted to get off the bus early and gave him directions straight to his house. Upton then had to figure out how to back the bus out of the neighborhood and retrace the stops he missed.

“Don’t let a kindergartener give you directions,” Upton said of the experience.

Learning was always a big part of the job, he said, and not just on the maintenance or janitorial fronts. His position was often also one of confidante, as district teachers and staff found him easy to talk to as a way of getting things off their chest.

Upton is set to retire in the first week of January, exactly 30 years after he started. Like a senior graduating and getting ready to be out on his own, Upton said he is a little nervous about leaving the school and figuring out what comes next. At only 53, he still wants to work. He has his CDL, he said, and might try for a job with the county or the state as a driver, and is considering subbing as a bus driver for the district. And there are also some projects he’d like to do on his home. But after a career at a place he truly liked, where everyone knew him and the administrators treated him with consideration, it’s not easy to put down the tools of his trade.

“I don’t know,” he said thoughtfully. “I might miss the place.”

2 Responses to “School’s out for district janitor”