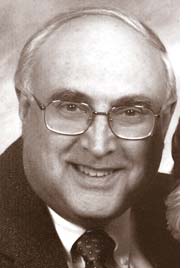 Doug moved to Yellow Springs in 1974 to become the minister of the First Presbyterian Church. It was there that he met chorister Anne Meredith, daughter of Clark and Margaret Meredith, whom he married in 1977. In 1980, he had a 3-month pastoral exchange with Rev. Haisley Moore of Old Wishaw Parish Church, Scotland, his father’s childhood parish. Active in the local community, he served on the Yellow Springs School board, as well as with several other social services and health organizations. During his time here, he especially loved hiking in the Glen and the special close-knit warmth of the village.

After leaving Yellow Springs, Doug worked for the East Iowa Presbytery in Iowa City for 10 years before relocating to Louisville, Ky. to serve as Associate for Evangelism on the national staff of the Presbyterian Church (U.S.A.). He retired in 2006 and moved to Bethany Village in Centerville in 2012 to be nearer to family, including his beloved grandchildren.