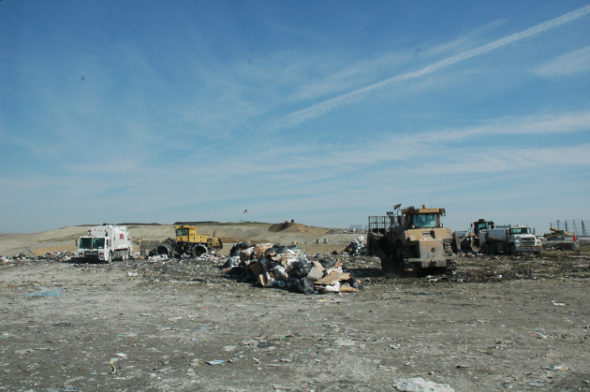 Yarn Registry BLOG: A Landfill is an Ecosystem Unto Itself, part VI

What does this all mean?

The sixth and final part of a series investigating the many layers of life in the average landfill. This week’s entry discusses my final thoughts and conclusions on the topic. Thanks for reading this trash!

Humanity’s current landfill practices are likely rooted in the path of our evolution. Humans were semi-arboreal as they evolved further from primates, and then finally walked away from trees. In the process, they were able to leave garbage behind and not have to think about it. Since then, garbage has, of course, been a chronic problem throughout civilization. The Middle Ages were famously mired in the excreta running through the streets, barrels of toxic waste currently impregnate mountains, and studies have shown that certain serious diseases often afflict people who live and work near a landfill. (Even the question of what to do with our own remains is also problematic. At one point, Paris had to relocate a million buried skeletons because they were leaching arsenic into the water.) Natural areas and habitats near landfills have been disrupted by the facilities’ expansion, or are at least nominally relocated. “For example, at our Brown County, Ohio, landfill,” Broadwater wrote in an email, “We built a 4-acre highly engineered wetlands to offset the destruction of smaller wetlands when we expanded the site. This wetland now houses many of the native species of plants and animals that call Brown County home.”

An appreciation for the dangers of the trash problem has become a more present part of the common consciousness. There were almost 8000 dumps in existence 30 years ago, but governments began consolidating dumps into much more regulated super-dumps in an effort to more tightly control the collection of trash and curtail its attendant hazards. There are currently around 2000 landfills in the United States. We still operate with the same sort of “out of sight, out of mind” sense of comfort that at least the trash is going somewhere, but officially, at least, we are legally bound to care about that somewhere for 30 years. Federal law requires that landfill owners have to set aside money to close the landfill and to care for the grounds for the succeeding three decades, during which they also are required to “pump the leachate, test the groundwater, inspect the cap, repair any erosion, fill low areas due to settlement, maintain vegetation and prevent trees from growing.” And in the US, opening a new landfill is a tightly controlled process involving a panoply of federal, state, and local agencies, and the undertaking of numerous impact studies. Rumpke staff said that in some cases it has taken over seven years to even get the permits that would allow them to even begin thinking about opening a new landfill. But despite the increasingly regulated process and the greater understanding of the dangers of excess garbage, our trash and what to do with it is a problematic phenomenon that is only growing. Rumpke, will its 300 acres of landfill, is eleven years away from capacity. The company is currently suing the surrounding township to expand its operations, but that will only facilitate more collection, not address the creation of so much garbage in the first place.

The average person in a developed country is responsible for generating about 2.6 pounds of garbage a day. Every three months, the average American man produces his weight in garbage. Researchers found that people threw away 289 million tons of municipal solid waste in 2012, a figure more than twice the 135 million tons that the EPA estimated for the same year, and a figure that is close to one ton per person per year in the US. By the year 2025, 4.3 billion urban residents are projected to generate approximately 6.1 million metric tons per day. Scientists estimate that 11 million tons of garbage will be produced daily by 2100. And the industriousness of the microbial process in a landfill is no laughing matter. Thanks to the methane produced by decomposition, garbage is an even faster growing pollutant than greenhouse gases. The EPA showed that greenhouse gas emitted by landfills that traps heat in the atmosphere 25 times more effectively than does carbon dioxide.

Well into the last century, New York City simply dumped all of its garbage straight into the ocean. One study found that plastics currently pollute no less than 88 percent of the world’s ocean surface. There are five major concentrations of plastic in the world’s oceans, with the largest, the infamous Great Garbage Patch of the Pacific Ocean, estimated to be twice the size of Texas. Trash is apparently even colonizing terrestrial space – there are currently almost 18,000 man-made objects orbiting Earth, with no doubt more on the way as the human races breaks free of its terran confines.

The animals at landfills currently have a tentative relationship to them, in that they are able to choose landfills when it is advantageous or convenient. They are still affected by the toxicity of its contents, and can’t quite establish a home in which they are as comfortable as they would be in their natural habitats. But as the amount of garbage grows and we develop new places to stash it, making a home in landfilled areas will become less of an option and more a species survival imperative. The growing patches of trash in the ocean and garbage biomes on land and the trash belt orbiting the planet will become the new frontiers of life, maybe even altering the course of evolution. Maybe ever-growing landfills will force rat’s kidneys to better accommodate heavy metal loding, or will help birds derive maximum nutritional value from the pickings they scavenge. Perhaps beetles will be able to consume Styrofoam, or maybe skunks will develop a coat of such incredible density that chemicals can’t penetrate it, or creatures will be able to nest in a mound of diapers. Claws will become refined to dig through piles of old appliances, proboscises will puncture through old batteries, and eyesight will evolve to see around the corners of old couches. Maybe new creatures entirely will develop, boasting an agglomeration of appendages especially suited for living in a landfill. Maybe new forms of bacteria will spring up that can metabolize circuit boards, bridging the gap between carbon-based life forms and virtual intelligence.

These changes will happen at evolution’s grindingly slow pace, but by the time these creatures have adapted to life in vast ecosystems of garbage, a future researcher will marvel at how readily and how ingeniously these creatures have adapted — and continue to adapt — to their befouled environs. High up in a building built among reclaimed trash piles, the researcher will gaze out in awe at the workings of nature, his musings accompanied by the music of birds mimicking the chime of enormous trash-crushing machines. Looking over the trash mountain range and the smiling lovers paddling in canoes down leachate rivers, the scientist smiles, pushing his triclops glasses up a nose evolved to selectively filter smells.

“Our world is a landfill,” he says. “A fascinating ecosystem unto itself!”