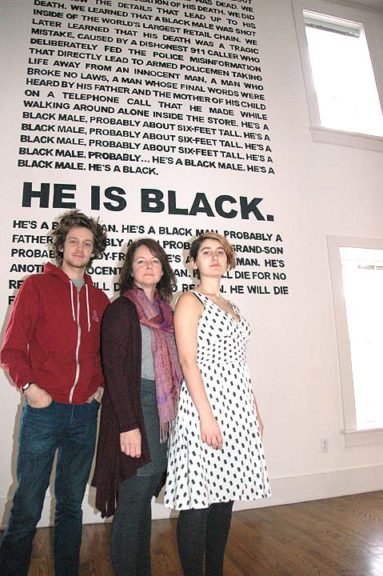 Standing in front of a wall-size poem by Umvikeli G. Scott Jones are Herndon Gallery Curater Jennifer Wenker, center, and student assistants Daniel Cox and Kathryn Olson. The poem is part of the new exhibit, “Living in Divided States,” which features the work of 50 area artists at Herndon Gallery on the Antioch College campus. (Photo by Diane Chiddister)

Those entering the Herndon Gallery’s “Living in Divided States” exhibit will first hear the voices, female and male, rising and falling in pitch, in intensity.

Visitors might next notice opportunities for listening, places where a few chairs have been placed in a circle, headphones nearby to hear someone’s story.

Or they might notice the giant chalkboard at one end of the room, on which people wrote about difficult feelings:

“Calling us to dig deep, to listen, to empathize.”

“So sad. How did my sister get to this place?”

Visitors might notice, on the opposite wall, a giant poem about the police shooting of John Crawford. And the photos of a black man, mainly naked, with shiny cloth draped over his head. And the installation of bullets that spells “To Protect and To Serve.”

Visitors might then notice, on the second floor, a simple table with paper, envelopes and writing equipment nearby. “What are You Afraid to Tell Me?” says a sign on a bulletin board next to the table, on which are posted envelopes with messages inside.

“To my white allies,” one envelope reads.

“To my shitty ex-love”

“The divide has never been greater”

This is only a portion of the viewer’s experience of “Living in the Divided States,” an exhibit that includes the work of more than 50 area artists. The participating artists are addressing the questions, “In these most divisive times of recent memory, where hate-filled rhetoric divides and fractures community and our sense of belonging, where we have “unfriended” every dissenting voice in our Facebook feed and only curate the news we want to receive, what has become of us? We are a nation divided and deeply entrenched. What does a post-election America look like? Where do we even begin?”

The current iteration of “Living in the Divided States” began the day after Donald Trump was elected president, when a group of art teachers at Antioch College gathered to discuss what they needed to do, according to Herndon Curator Jennifer Wenker in a recent interview. A planned exhibit at the gallery had been cancelled, so that the space for a new show suddenly opened up, available soon.

As usual in their weekly discussions, group members were asking themselves, “What’s happening in the world? What should we be showing?” according to Wenker.

The discussion followed earlier ones this fall, during which they began planning an exhibit to address the divided state of the American electorate, a topic also being explored in the college’s Global Issues Seminar. At the time, the faculty members wanted a way to ask viewers to delve into some of the issues and realities that seemed to divide the country.

“What Facebook and social media does is give us quick information, without depth and nuance,” said Wenker, stating that the exhibit organizers wanted to offer something deeper. “Artists are the canary in the coal mine. They see the world in a different perspective, with curiosity, not afraid to ask questions.”

The group agreed that the basis for the exhibit had to be listening, finding ways to understand the reality of someone different than oneself.

“We all agreed the dialogue, the conversations were the most important piece,” Wenker said.

Yet after Trump’s election, group members believed they needed a change of focus. While they still wanted to emphasize listening to those who are different than we are, they also felt strongly that some in the college community now felt threatened by potential fallout of Trump’s election. And some were in fact experiencing violence, such as an Asian-American student who had been grabbed by a stranger in Fairborn.

“Our students were being hurt,” Wenker said. “We felt there were so many voices not being heard and we needed to lift up the voices of those most at risk.”

So the group began moving quickly, contacting other artists in the Miami Valley and those they knew professionally who might have something to say. Antioch College faculty members and students also submitted their own work. What evolved was a multimedia show of visual arts, performance, media arts and a variety of artistic expressions.

While the last-minute changes proved a challenge, the show ultimately came together, partly due to the network of artists in the Miami Valley.

“We had to scramble but I’m glad we were nimble enough to make this happen,” Wenker said.

Included in the show are faculty members from regional colleges and universities, including Furaha Henry-Jones of Sinclair Community College; Rodney Veal of the Stivers School of the Arts and Sinclair; Issa Randall and Glenna Jennings of the University of Dayton, Crystal Michelle Perkins of the Ohio State University; Harry Sanchez of the University of Cincinnati, Antioch College faculty members Michael Casselli, Louise Smith, Juan-Si Gonzalez and Kelly Gallagher and Charles Fairbanks.

“By bringing together artists from multiple perspectives and artistic practices, we hope to engage the audience in a sustained conversation about the state of our imperfect and currently fractured union,” wrote Co-Curator Rodney Veal in a press release. “This is a personal and communal journey that only a gallery can help facilitate.’

Curator Wenker hopes that those who view the exhibit come away with an expanded awareness of the realities of those who are different than they are.

“I hope people can stop the entrenchment, have a little permeability in order to hear each other,” she said. “Right now, there’s such a deep chasm of divisiveness.”

The show, currently closed until Jan. 7,  will be open weekdays from noon to 5 p.m. and Saturdays from 1 to 4 p.m,