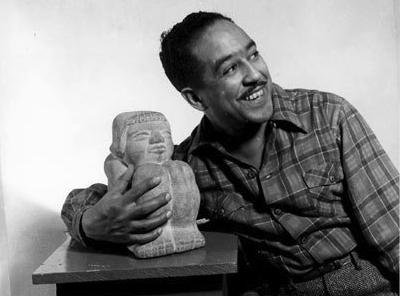 A celebration of the works of Langston Hughes will kick off on Feb. 1. (Photo in public domain)

On Wednesday, Feb. 1, 7:30 p.m., the World House Choir will present Dr. Kevin McGruder, vocalist Charles Williams and pianist Sam Reich in “I Dream a World: The Life and Writings of Langston Hughes,” at the Foundry Theater. On the 115th anniversary of the birth of writer Langston Hughes, McGruder, Williams and Reich will present an overview of Hughes’ life and readings from his work, supplemented by examples of his many musical collaborations. Admission to the program is free.

Dr. Kevin McGruder is an assistant professor of history at Antioch College. Charles Williams, tenor, is also a vocal coach. Sam Reich is a Yellow Springs-based pianist who has presented a wide range of solo classical music performances and also regularly serves as an accompanist for area performers.

The Feb. 1 program is the inaugural event in “Relevance and Resonance: A Langston Hughes Retrospective with YS Community Performing Artists,” a series of events commemorating the 50th anniversary of Hughes’ death. Other programs will include:

• Feb/March — “The Negro Speaks of Rivers,” a project with classes at YS Schools;

• March 16 — Dr. Tammy Kernodle presents “Langston Hughes and His Role in Shaping the Political Consciousness of Black Women Artists-Activists in the 1960s;”

• May 7 — “Works Connected With the Harlem Renaissance,” Community Orchestra and Community Chorus.