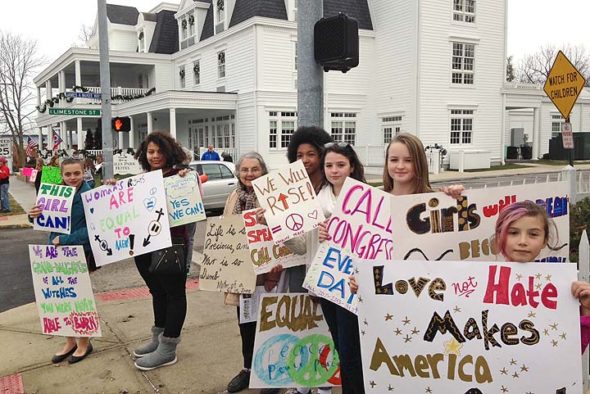 The Yellow Springs Sister March drew at least 250 villagers on Saturday, many expressing positive, pro-women messages, some of them playful. The local march was organized by local seventh-graders Carina Basora and Ava Schell. (Submitted photo by Janeal Ravndal)

At least 250 people took part in Yellow Springs’ Sister March on Saturday, Jan. 21 — a companion to the Women’s March in Washington, D.C., and hundreds of sister marches around the country and world.

Crowds began gathering just before 1 p.m. on Saturday at the corner of Limestone Street and Xenia Avenue, adjacent to the weekly Peace Vigil. Some marchers wore pink, and many carried signs proclaiming “Girl Power,” “Women’s Rights are Human Rights,” “When They Go Low, We Go High” and “Love Trumps Hate.” 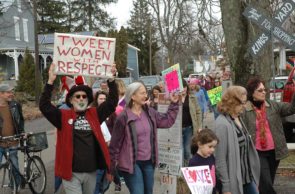 The local march was organized by two seventh-grade girls, Carina Basora and Ava Schell. They came up with the idea last week, hoping to “make a statement” about Yellow Springs’ support for women’s rights, and seeking to join in solidarity with marchers in D.C., Dayton and elsewhere, according to Schell.

“It’s important to have women’s rights even in hard times,” Basora said just before the march.

“Everyone should be treated equally,” Schell agreed.

The march was peaceful and full of positive energy, which is how the organizers wished it to be. In the flyers they created for the march, Basora and Schell requested “no anti-new president signs.” And indeed, the crowd’s signs and chants overwhelmingly reflected pro-women and pro-girl messages, some with a playful twist (such as “Tweet Women with Respect”).

Marchers followed a route down the sidewalk of Xenia Avenue to Corry Street, Dayton Street, Walnut Street and back to the center of downtown, completing this circuit several times. Some villagers watched, some joined in and a few cars passing by honked from the road.

The News will be running a selection of photos from the Yellow Springs, Dayton and D.C. marches in this week’s issue. We will also be curating a gallery of photos online. Yellow Springers who participated in marches around the country and world are encouraged to submit photos to the News through our online submissions form.