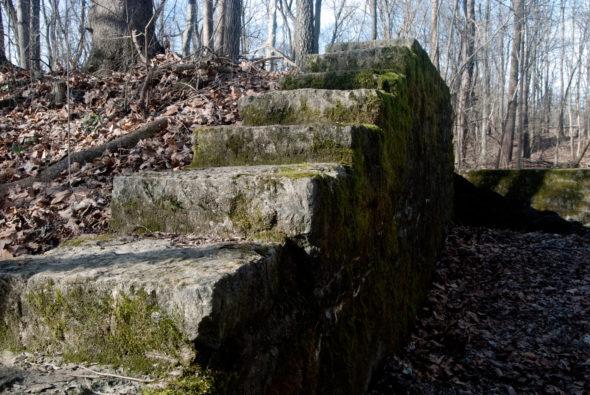 Forgotten Springs, vol.1 – a Tangled Valley and the Ruins of an Old Amphitheater

In JG Ballard’s 1974 novel Concrete Island, the protagonist is involved in a car accident on a highway ramp and goes over the edge of the barrier, finding himself in a sort of forgotten wilderness area created where the highways overlap. He is trapped in this strange triangle, and soon finds that a few other people are too.

Locally, the triangular valley created by Cemetery Street, the Bryan Center and route 68 gives off a similarly forgotten vibe. While the presence of cars and houses doesn’t put local explorers in quite as dire straits, the preponderance of ruins and tangled underbrush creates a sense of the forlorn in the way that only crumbled human structures can. There are remains of an amphitheater, some walkways and bits of a dam, all of which speak for something that once was but now is not.

In this first entry in an occasional series about the lost corners of Yellow Springs, photographer Aaron Zaremsky and I will post some photos of and reflections on these areas, which are beautiful in their own right and tend to disrupt the human tendency to think about our lives as if we’ll go on forever. 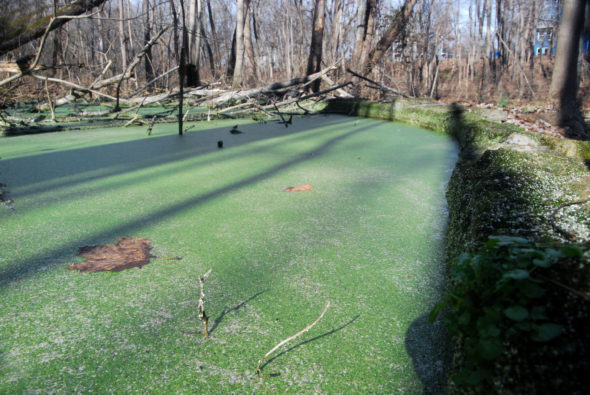 Mosquitoes abound in this valley and stagnant water is covered with primordial slime, and the whole area is overseen by a decapitated tower of some sort. Teenagers everywhere can rejoice that the remains are actually part of what used to be a high school. Too much joy can’t be taken in a school reduced to rubble, however, as the ruins are only those of a few accessory structures and not the school itself. In fact, the Bryan Center used to be the village’s high school, and that building, of course, is still standing.

The origins of the Bryan Center began in 1902, when John Bryan (of the eponymous park) bought the land from a a man who previously operated a home for the elderly. The home for the elderly burned down earlier that year, thanks in part to the local fire department’s inability to connect to the nearest fire hydrant. As if a burned-down old folks’ home didn’t make the area gloomy enough, a murder took place in one of the homes built along the creek in the same valley.

The story goes that a winsome naturalist and autodidact named Denman Duncan caught the eye of one Mrs. Hanes, whose husband worked at a nearby nursery. Mr. Hanes became incensed that his wife marveled at Duncan’s apparently superior knowledge of ferns. “Skunk cabbage is all he’s ever found,” Hanes huffed. Jealously ate at Mr. Hanes, and so one night he crept over to Duncan’s cabin and killed him with a hatchet. Naturally, this untimely death has inspired talks of phantasmagoric sightings in the valley, primarily in the form of a phosphorescent fern that Duncan (and Mrs. Hanes) liked. (As Aaron and I were there in the middle of the afternoon, we did not experience this phenomenon.) 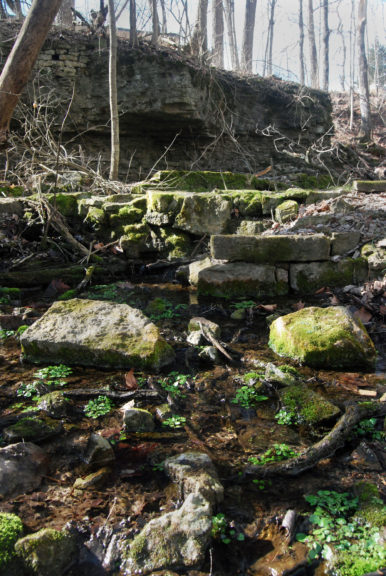 John Bryan ultimately gave the lot to the Village in 1916 and asked that they build a school there. However, Bryan had a few stipulations: the school couldn’t bar from attending anyone based on race, there was to be no basement in the school (why he made this request I don’t know) and no religion could be taught in the school building. The latter concern was particularly important to Bryan, as he made the same prohibition in the park bearing his name.

Bryan’s antipathy toward religion was exacerbated by a tiff he had with Antioch College. Bryan fancied himself an author and at one point self-published a book of fables. When he tried to get the book into the library of the College, it was rejected because it apparently didn’t have any religious value. Bryan was a staunch agnostic and found the rejection galling, and so in order to spite the college, he began buying land adjacent to it and vowed to put it out of business. While he didn’t succeed in driving away the college, he willed his land to the state for use as a park, provided that no religious services could ever take place on its grounds. (The long arm of the Lord ultimately prevailed, however, when courts ruled that religious beliefs couldn’t be banned from public land.) 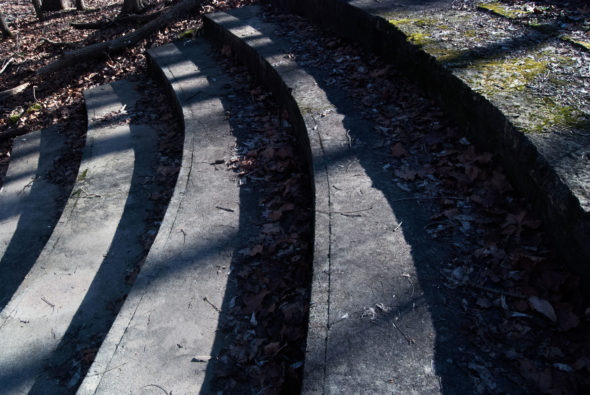 The school was built in 1928, and a grant from the Works Progress Administration was used to construct an amphitheater, a stone walkway, tennis courts and many of the other accouterments whose remains can be explored today. The school was moved to its present location in 1963, and the building was renovated to become the community center and police station that we know today.

Regardless of the origins and the history that has characterized the land, the eternal natural processes are what ultimately have dominion in this valley. Visitors can be subsumed by the tranquility of the moss and the trees, just like remains of previous human endeavor.

(Thanks to yshistory.org for much of this background.) 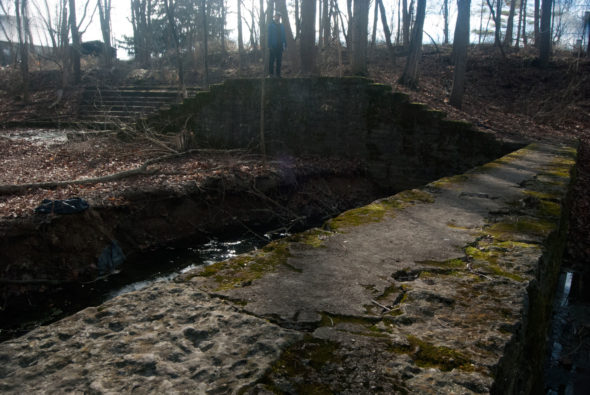 6 Responses to “Forgotten Springs, vol.1 – a Tangled Valley and the Ruins of an Old Amphitheater”