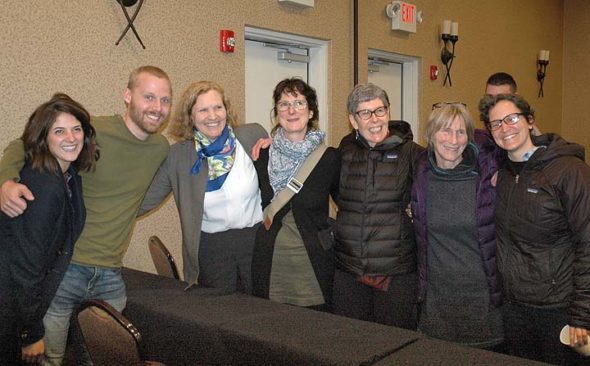 It was standing room only when the auction of the Arnovitz family farm began last Thursday at the Hilton Garden Inn in Beavercreek. Two-and-a-half hours later, the crowd had thinned, and when auctioneer Ron Denney banged his gavel down, bringing the auction to a close, the farm had sold for a total of $1.6 million, with seven successful bidders purchasing the property’s nine parcels.

Local nonprofit Community Solutions bought 128 acres, or nearly half the acreage, for $655,000. It plans to establish a center for regenerative agriculture on the land, as well as relocate its offices there. Miami Township resident Julie Jones purchased 84 acres for $400,000. Other buyers included Springfield attorney Greg Lind, local contractor Jimmy Kingsolver, local residents Patrick Butcher and Norma Tallent and two other individuals. All sales must close by April 28.

Last Thursday’s auction was not quite another Whitehall, the dramatic 1999 auction in which local residents Sharen and Dave Neuhardt bought all 940 acres of Whitehall Farm, backed by Tecumseh Land Trust and massive grassroots support in the village.

But while no single buyer emerged for the more modest 267-acre Arnovitz farm, located in Miami Township on the western edge of Yellow Springs, the sale was still a significant win for agriculture and conservation, according to Krista Magaw, executive director of Tecumseh Land Trust, or TLT.

“It couldn’t have gone much better,” Magaw said Friday.

Magaw expects about 200 of the 267 acres will be put under conservation easement. That represents about a tenth of the approximately 2,000 acres of land remaining to be protected within the Jacoby greenbelt, an area surrounding Yellow Springs targeted for greenspace preservation by the Village since the 1960s.
“This brings us closer to that goal,” Magaw said in a follow-up interview on Monday.

In two separate resolutions earlier in March, Village Council voted unanimously to commit up to $200,000 in Village greenspace funds toward the purchase of conservation easements on the Arnovitz land, with a specific focus on protecting Jacoby Creek.

It was unclear early this week how and to what extent those funds might be used, as conversations with buyers are just beginning, according to Village Manager Patti Bates in an email Monday.

About a week prior to Thursday’s auction, Community Solutions publicly stated its interest in the largest of the farm’s parcels, 124-acre Tract 8, for a planned center for regenerative agriculture. According to a proposal prepared by the nonprofit, the center will “showcase best practices in regenerative land use and serve as a research site that documents the development of carbon-rich soils.”
The project will likely entail the building of several “low-impact” homes for farmers on the land, according to Executive Director Susan Jennings on Monday. As many as five individuals may live and farm on the land initially, with the potential for growth over time, she said. Any dwellings erected would be constructed on the eastern side of the property, as far as possible from Jacoby Creek and along a lane where other buildings from an adjoining property are already located.

Surprising some observers, the nonprofit also purchased a second parcel, 4-acre Tract 6, for the purpose of relocating its offices to an existing house there.

Community Solutions shares with the Village and TLT a commitment to protecting the creek and the wooded areas that surround it, Jennings said Monday, reiterating an earlier pledge to work with the Village, TLT, the Nature Conservancy and other groups to put about 80 acres of the parcel around the creek under conservation easement.

The nonprofit has focused on peak oil and climate change issues in recent years, and this project is a practical application of that focus, according to Jennings. Regenerative farming practices such as no-till agriculture and the integration of trees with crops have the potential to offset the effects of climate change through rebuilding soil health and increasing its ability to sequester carbon, she said.
But Jennings acknowledged that the purchase of land to implement regenerative agriculture was a new step for the nonprofit. While the Community Solutions board had already identified regenerative farming as an area of priority for the organization, members were faced with a test of their commitment to the issue when the Arnovitz land abruptly came available in late February.

“They were willing to take a leap,” Jennings said of the board.

Community Solutions board member Kat Walter said that the chance to improve the health of soil and land in the nonprofit’s backyard was too valuable to pass up.

“It’s an incredible opportunity to put what we know is so important into practice … to become a showcase,” she said.

The nonprofit plans to involve local schools, Antioch College and other area colleges in the research, as well as work with area farmers and soil scientists, Walter added. And it will likely hold a public charrette this spring to include community members in planning for the center and other potential activities on the land, such as habitat restoration and the creation of pollinator pathways.

According to Jennings on Monday, the nonprofit raised the $655,000 for the land purchase in a matter of weeks from just eight donors, some of whom seek direct involvement in the project by farming, and living on, the land. Villager Maureen Dawn, a longtime organic agriculture enthusiast, was one of these supporters. She said Monday she hoped to help farm the land, and perhaps live on the property.
“I’m interested in being part of it however it unfolds,” she said.

While Community Solutions secured the largest single parcel, an individual buyer, Julie Jones, purchased the next largest parcel, 84-acre Tract 9, for $400,000, after bidding briefly against Community Solutions for a combination of Tracts 8 and 9. Jones, a Miami Township resident, declined to comment after the auction on her plans for the land, which is currently being farmed.

However, TLT’s Magaw said Monday that Jones and her husband have signaled their intention to preserve the property as farmland. The couple attended three of TLT’s bidder education sessions prior to the auction, and may be interested in a conservation easement, according to Magaw.

If so, the bulk of these two large parcels, which together constitute about 80 percent of the farm, would be under easement.

A conservation buyer, Springfield attorney Greg Lind, purchased Tracts 1 and 2, with a combined area of 26 acres, for $216,000. Lind said Tuesday that he was alerted to the property by a TLT board member, and plans to put 23 acres into conservation, reserving the remaining three as a home site where he will eventually live. Lind previously preserved 100 acres outside Marysville, Ohio, and is seeking a combination of federal and state funding for wetlands and prairie grass conservation on this land.

Local contractor Jimmy Kingsolver purchased 13-acre Tract 3 for $142,000, after bidding repeatedly on a combination of Tracts 3, 6 and 7, but ultimately winning just the one parcel. Kingsolver said after the auction that he currently rents a home on Tract 3, and plans to continue living there. He sought to acquire the other two properties because his son lives in a home on one and his shop is located on another, he said.

Five-acre Tract 4 was sold for $60,000 as a building lot to a buyer who intends to build a home on the property, while 4-acre Tract 7, which includes a house, was sold for $129,000 to a family with young children seeking access to Yellow Springs schools, according to Magaw. Conservation potential on each of these parcels is limited, she said.

And local residents Patrick Butcher and Norma Tallent purchased 5-acre Tract 5, adjacent to their current home, for $55,000. The parcel is wooded, and the buyers seek to put the area into conservation, according to Magaw.

Over 80 people, including around 20 from Yellow Springs, attended the auction. There were 49 registered bidders, though only about a dozen of these actually placed bids. No housing developers appeared to bid last Thursday, despite concerns among some villagers and Village officials that the land might draw development interest, according to Village Council President Karen Wintrow, who attended the auction.
“Given the development potential, the outcome was positive for the village,” Wintrow said Monday.
Magaw said she believed Council’s March 6 resolution, in which the Village refused annexation or utilities extension to any property west of village boundaries, played a role in discouraging potential developers.

“I think the Village’s action made a difference,” she said.

At $1.6 million, the farm’s total sale price fell in the middle of the $1 million–$2 million range Magaw had anticipated prior to the auction. Farmland went relatively cheaply, while building lots were more highly valued. For example, 84-acre Tract 9, currently being farmed, went for about $4,700 per acre, while 5-acre Tract 4, a building lot, sold at $12,000 per acre.

Matt Arnovitz did not respond to calls this week seeking comment about the auction outcome.

Now the hard part begins, according to Magaw.

“The Whitehall experience was unusual, miraculous. This is going to be a lot more complicated,” she said, with a laugh.

With seven buyers, a range of owner objectives and a variety of local, state and federal funding sources, TLT has its work cut out for it, and may need to staff up for the effort, Magaw said.

The local land trust has raised more than $157,000 from local donors in the past few weeks specifically toward conservation easements for Jacoby Creek. Added to that is the $200,000 Council committed in Village greenspace funds, which are likewise earmarked for creek preservation. Manager Bates said by email Monday that she anticipates working with TLT, Community Solutions and other buyers on the best use of some or all of those funds.

Magaw anticipates presenting Village Council with a preliminary plan of easement values and funding sources at its April 3 meeting. But while next steps will happen quickly, she expects that it will take up to five years to finalize all the easements on the property.

Meanwhile, the strong show of citizen interest and support has underscored the importance of protecting the Jacoby Creek watershed, according to Magaw. “It’s risen as a priority for us because of the outpouring of support,” she said. TLT will be reaching out to other landowners within the watershed, which overlaps the greenbelt, to proactively seek easements.

Council member Marianne MacQueen, who attended the auction, drew a similar lesson. “We have to be proactive,” she said. While she said she’s pleased with Council’s quick commitment of greenspace funds in this instance, she would like Council to explore other funding mechanisms, such as short-term loans, to respond to future land sales in the Jacoby greenbelt.

“We have to be prepared to address opportunities when they come up,” she said.