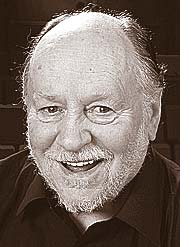 Ron was a generous Renaissance man. He shared his photography, writing, editing, acting, singing (he would drop anything and everything for a song), and sobriety-counseling skills with whoever asked. As a writer, Ron was a champion of the Oxford serial comma; as a talker, he was a beloved member of the Emporium regulars.

Ron worked his way through college as a free-lance photographer and night-shift typesetter for the Quincy-Herald Whig in Quincy, Ill., where he went to Quincy College and met his future wife, Pat Higgins. They were married for 60 years and had five sons. Their family life began in Iowa City, Iowa, while Ron was in graduate school. From there, they moved to Springfield and then Oak Park, Ill. They made Yellow Springs their home in 1978.

Ron also studied at the Missouri School of Journalism at the University of Missouri in Columbia and had a longstanding publishing career. He served as editor at the Webster Publishing Company and at the Journal of the American Hospital Association, both in Chicago. After moving to Yellow Springs, he was editor-in-chief of publications for the Foreign Technology Division of the U.S. Air Force at WPAFB. He also did free-lance writing and editing for various newspapers, newsletters, and aspiring authors too numerous to name. And ever sensitive to violations of human rights, he lent his expertise to School of the Americas Watch publications.

Ron discovered his love for theater and singing in Yellow Springs. Some of his favorite roles were in Gilbert and Sullivan operas; a special favorite was in The Mikado. He was one of the earliest members of the Dayton Philharmonic Chorus and continued that passion until four years ago.  In Yellow Springs, he lent his lovely bass voice to the Yellow Springs Community Chorus, the World House Choir, several barbershop quartets, Vocal Vortex, the Yellow Springs Unitarian Fellowship, and other groups. In the last couple weeks of his life, Ron continued to sing with Beverly Logan, his esteemed vocal coach and friend. He’s well prepared for any heavenly choir.

A green burial service will take place on Saturday, March 4, at 1 p.m. at Glen Forest Cemetery natural burial area on U.S. Route 68 N., just outside of Yellow Springs. Afterwards, there will be a celebration of Ron’s life at 3 p.m. at First Presbyterian Church. Refreshments will be provided. Bring a dish to share, if you wish.

In lieu of flowers, please send donations to the Yellow Springs Community Chorus, the World House Choir, or Beverly Logan, grand mentor to so many Yellow Springs singers.