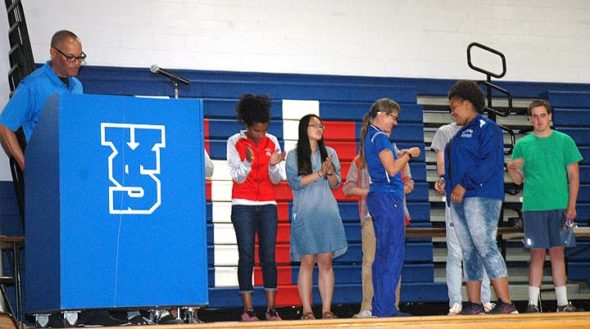 YSHS track and field coach John Gudgel stood behind the podium in the YSHS gym on Monday evening at the spring sports banquet, where he gave parents, coaches and student athletes an overview of the track team’s accomplishments. Coach Isabelle Dierauer handed out individual awards to members of the team. Also represented at the banquet were the tennis, softball, baseball and McKinney track teams. (Photo by Dylan Taylor-Lehman)

As it often is, the gymnasium at Yellow Springs High School was recently a place of celebration and athletic good cheer. The spring sports banquet was held earlier this week and was attended by the athletes, parents and coaches involved with baseball, softball, tennis and track and field. While largely a celebratory event that highlighted the accomplishments of the various teams and athletes, there was also a small amount of athletic weltschmerz, as it was a last hurrah for senior athletes, who are going on to bigger fields and teams.

First, Athletic Director Nate Baker gave shout-outs to the number of individuals and groups who keep the McKinney and YSHS sports running smoothly: athletic boosters, concession stand coordinators, the athletic program’s cosponsors and a certain handsome, intelligent reporter at the YS News for his continued coverage of Yellow Springs sports. Special thanks were given to coaches and the athletes’ parents.

“I know it’s hard for you to stay focused, but I really hope you appreciate all your parents do for you,” Baker said. “And it goes without saying how much respect and appreciation” is owed to the coaches.

Up first was the McKinney track team, coached by Valerie Kirk and Peter Dieauer. Kirk said she loved the expressions on the athletes’ faces while Dieauer said he was truly rendered speechless by the fact that the team broke no less than six school records that season.

The high school track team took the stage next, lead by the effusive coach John Gudgel who extended the thanks to the “thankless job” of the athletic director and the school bus drivers. He took attendees through the similarly record-breaking season, highlighting individual accomplishments and then bestowed his own awards on the team (such as the “Ultimate Thrower” award) in addition to the Bulldog and Coach’s Award. The track team boasted numerous scholar-athletes, he said, and are some of the “nicest kid[s] you’ll ever come across” and “pound for pound some of the toughest athletes” he’s ever worked with.

YSHS baseball coach Brandon Bresler was a little more somber, as the team’s 3–16 record for the season reflected a team getting on its feet. However, the course of the season showed tremendous improvement, and athletes “making plays [he’d] never thought they’d be able to make.” He said his goal is to build the baseball program into a top-notch competitor in the years to come.

Next up was the softball team, the freshly-crowned conference champs.

Softball coach Jimmy DeLong said he of course wanted the girls to have fun and enjoy the season, but he also knew there was a lot of pressure this season following last spring’s tremendous season. The team is “part of history” because of the way they “dominated league play,” he said. They had an undefeated conference season and are the first team to win a Metro Buckeye Conference title.

Tennis coaches Donna Silvert and Stacie Knemeyer took the stage with the tennis team, who “from the first practice to the last, learned and improved with an attitude that makes any coach’s job easy.” Knemeyer said that the team’s reputation for sportsmanship precedes them, and they frequently receive accolades from other coaches and schools across Miami Valley. In addition to a winning season — the team came in second place in the conference — the affability and dedication of the teammates on the court demonstrates “pure enjoyment of the game.”

Next, Coaches Donna Silvert and Jimmy Delong were crowned Coaches of the Year, a distinction that was especially meaningful because it was bestowed upon them by their peers across the conference.

The Archie Griffin Sportmanship award was given to Augie Knemeyer, of the tennis team, and Amani Wagner, of the track team. The National Athletic Association Award of Excellence was given to the softball team’s Dani Worsham, while track star Julian Roberts and softball maven Hannah Morrison were deemed conference Players of the Year. Morrison also received the Ohio High School Athletic Association’s Scholar-Athlete award, as Morrison was not only a standout ball player but also the class of 2017’s valedictorian.

Track and field
But the season is not yet over. Track and field athletes still have the regional and state conferences to look forward to. Spurred on by the highest finish of a YSHS girls team in over 25 years at last week’s district meet, YSHS will be sending a large contingent of Bulldogs to represent the school and the village this weekend at Troy Memorial Stadium. The girls team finished in third place out of 19 teams at districts, only three points away from earning a second place trophy. The girls were once again led by Julian Roberts, who, for the third year in a row, won the 300 hurdles and also ran to a second-place finish in the 100 hurdles.

But many team members contributed to the team’s success. Payden Kegley propelled herself over the 8´0˝ mark in pole vault, setting a new school record and earning a runner-up finish in the process. Amani Wagner earned a trip to regionals for the second year in a row by throwing the discus 103´6˝. Other lady Bulldogs competing at regionals are Olivia Brintlinger-Conn, who took third place in the 300 hurdles for the third year in a row, Ayanna Madison in the 100 meters, Jasmine Davidson in shot put, and the 400 relay team of Brintlinger-Conn, Madison, Christina Banks and True Hall.

Overall, the boys finished in 13th place out of 18 teams, but a few boys also qualified for the regionals: Joe Plumer leaped to second place in the long jump while James Browning practically touched the sky in his third-place finish in the high jump.

Coach Gudgel was thrilled with performance, and what it means going forward.

“This is the largest contingent of track athletes that we have taken to the regionals in over 15 years,” he said. “The future is bright with so many underclassmen competing.”