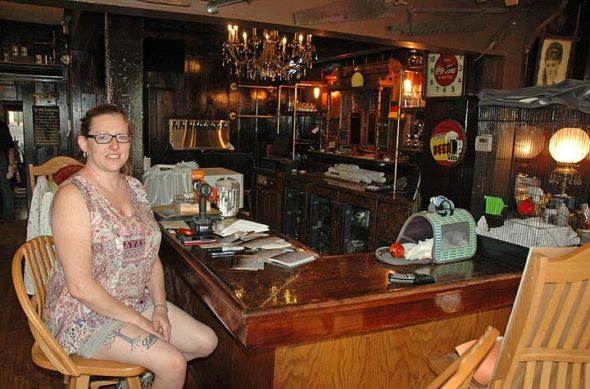 Christine Monroe-Beard, who purchased Ye Olde Trail Tavern in January with her husband, Don Beard, recently sat at the restaurant’s bar surrounded by photographs of old documents and newspaper clippings about the Tavern’s 190-year history. The couple has been rehabilitating the historic tavern and is hoping to reopen the establishment within the next two weeks. In the meantime, Monroe-Beard has become an expert in the building’s series of owners and uses. (Photo by Dylan Taylor-Lehman)

As anyone who has ever rehabilitated a building knows, unforeseen delays are just part of the process. This has proven to be true for Christine Monroe-Beard and Don Beard, the new owners of Ye Olde Trail Tavern, who are close to reopening the restaurant after beginning rehab work in January.

The delays were perhaps inevitable considering the age of the building, but Monroe-Beard has spent that time becoming immersed in the establishment’s history. The fruits of her research and the months of construction work will come together when, according to Monroe-Beard, the building reopens sometime in the “next week or two.”

“We wanted to reopen a heck of a lot sooner,” she said, “but rehabbing a 200-year-old building takes time.”

Beard and Monroe-Beard bought the restaurant in January and almost immediately started renovations. As the project unfolded, Monroe-Beard said she understood why many of the repairs hadn’t yet been undertaken: rehabbing to the extent she felt necessary meant that the restaurant would have to close for months, something that many restaurateurs cannot afford to do.

Some of the updates include revamped interiors and décor and a brand-new walk-in cooler/freezer on the second floor, a project that required the input of a structural engineer. The bulk of the renovation is done, and only a few more inspections remain before the tavern can reopen, Monroe-Beard said in an interview last week. There is no way to expedite the process because one inspection depends on the successful completion of another, she said.

The final inspections were delayed in part because of Xenia’s annual “Ham-vention,” a HAM radio soiree held at the Greene County Fairgrounds. The hobby apparently demands so much power that all county inspectors were dispatched to the location to make sure the grid could handle the load, Monroe-Beard explained.

The age of the restaurant building made for many time-consuming construction challenges — “there are no level surfaces and no right angles,” Monroe-Beard said — but the project had them literally peeling back layers of history: writing has been found within the walls, for example, and the building’s hidden architecture reveals more of its story.

Monroe-Beard was drawn to the legacy of the building and has made herself a frequent guest at the Antiochiana library, where she’s been perusing the microfilm collection “every couple of days since January” for information about the tavern. Thick stacks of 3×5 photographs of old newspaper articles were piled on the bar last week, revealing a comprehensive history of the tavern and the daily life of its various tenants and owners.

“Finding out about the building’s history has been the coolest and most surprising aspect of the project,” Monroe-Beard said. “It’s like getting to know the family that lived here.”

The building that became the Tavern was built in 1827 by Elijah and William Mills, two early movers-and-shakers of the nascent Yellow Springs. Originally located elsewhere in the village, it was bought by Frank Hafner in 1847 and moved wholesale to its current location, which at the time was right next to another cabin.

Doorways were cut between the buildings, and the uneven doorways and other architectural quirks attest to the establishment’s piecemeal construction. When the builders recently cut into the wall to install the freezer, for example, they found roofing shingles on both interior surfaces between the buildings, as the walls were formerly the outside walls of the separate structures.

Monroe-Beard’s research dispelled the oft-repeated legend of the building, which holds that it was serving area residents since the early nineteenth century. While this isn’t true — it was a private residence for almost 70 years — the building did convert into a restaurant as soon as it changed hands. Hafner died in January, 1895, and the cabin became a restaurant a month later, on February 14, 1895. Since then, it has served countless villagers, bikers and tourists, which a 1978 article in the Antioch Record said included Bob Hope and Wilt Chamberlain. The tavern was even the site of an environmental protest in 2001, when three people camped in a tree on the property in an attempt to stop the owner from cutting it down.

After learning so much about the building, the couple feels they are helping steward the village’s living history. The tavern was rehabbed in a way that made for “a little better functionality,” Beard said, but not in a way that takes away from its historical role. Beard said he even made sure to leave the graffiti carved in the table intact.

“I’m such a history person,” Monroe-Beard said. “It’s a certain amount of responsibility to take care of the building and see it go into the future.”

The restaurant’s revamped menu will also pay homage to the tavern’s history. In addition to the staple burgers and cheeseballs, the restaurant will feature a variety of food from Germany, Frank Hafner’s homeland. The menu will also evolve like the building has. The expanded kitchen will allow for much more homemade food, Monroe-Beard said.

Once construction and the inspections are finished, Monroe-Beard said the tavern won’t have a grand reopening ceremony but will simply reopen its doors. It’s easier that way, she said. Former patrons have been inquiring a few times per day when the restaurant will reopen, and the constant enquiries lead her to believe that the restaurant will be swamped as soon as it reopens.

“People are pretty damn impatient,” she said. “People took it personally that it was closed. We have a loyal clientele and that’s very flattering.”

The tavern’s former owner Cathy Christian said in a previous interview with the News that when a building is as old as the tavern, “you’re not really the owner — you just manage it for a period of time.” Monroe-Beard said she is thrilled to be part of the legacy of the tavern, and with the prospect that perhaps her name will show up in the research done by future owners.

One Response to “Historic Trail Tavern to reopen after rehab”