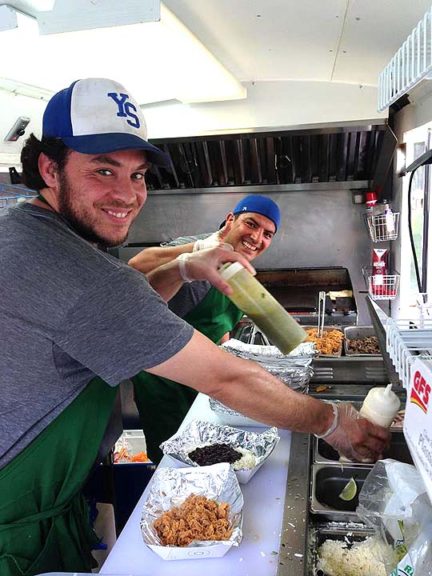 Miguel’s Tacos, the village’s newest food truck, serves up tacos and bowls made with fresh ingredients behind the Trail Tavern Thursdays through Sundays, 11:30 a.m. to 7 p.m. Shown above are the truck’s owner, Miguel Espinosa, at left, and David Boyer. (Submitted Photo )

Only fresh and local for taco truck

ROLLING RESTAURANTS
This is the first in a series of articles profiling food trucks that frequent the village.

“When I ask them what they want for dinner, they say ‘McDonald’s.’ If not that, they say, ‘anything you make is good, Dad.”

The above, according to Miguel Espinosa, is the challenge of a dad who’s also a chef. But in Yellow Springs, villagers who aren’t his kids have no trouble choosing Espinosa’s tacos over fast food.

Locals may have noticed a new addition to the growing population of food trucks in the village. Miguel’s Tacos, located behind Asanda Imports in King’s yard, has quickly become a popular destination for authentic Mexican tacos made with fresh ingredients. Espinosa prides himself on using nothing from a can.

Espinosa was born in Mexico and came to New York City when he was 15 years old. His father was a chef in a Mexican restaurant, which is where Espinosa’s food career began. Espinosa discovered early that he wanted to cook more than his native cuisine.

“I started working at a pizza place. After I found out that there was nothing more for me to learn, I quit and went to learn a different style. I worked at a French restaurant, an Asian restaurant; I was a premier cocktail designer and bartender in New York City. I have done every single position in a restaurant,” he said in a recent interview.

This experience shows in his food. Miguel’s Tacos debuted at the 2016 fall Street Fair and the response was positive enough for Espinosa to begin thinking seriously about his next culinary venture.

“Everyone really enjoyed the tacos, that gave me the idea. Let me do something with this; I cook the way I like to eat. Fresh and simple tastes,” he said.

The truck is open Thursdays through Sundays, 11:30 a.m. to 7 p.m. The menu offerings include tacos and bowls. Tacos include a soft corn tortilla and a choice of meat: carne asada, carnitas, alpastor or chicken tinga. Fresh onions, cilantro and salsa made daily are also available. Bowls are comprised of rice, beans, choice of protein, lettuce, pico de gallo, sour cream, salsa and cheese. Tacos are $3 each; bowls are $10.

Yellow Springs is known to be populated by a good number of foodies, something Espinosa appreciates, and he feels confident that he can satisfy even the most discriminating of gourmands.

“I left New York City and went to Tampa, Fla., and started working at a sushi restaurant; I was cooking Mexican food for the staff only. The owner was like, ‘Let me tell you something: I really hate Mexican food, but your food is delicious. We’ve never had anything like this before. We should open a restaurant.’ I said yes, and three months later we opened the Jalapeno Mexican Grill,” he said.

The restaurant business is notoriously difficult, so after two restaurants had been unable to stabilize, Espinosa and his wife, Yellow Springs native Dawn Boyer, packed up their three children and moved to the village, when Boyer was hired as development director for Yellow Springs schools.

“For the first year we were here, I was a full-time husband and dad. When she got home the house was clean, supper was on the table, homework was done. Dawn was loving it!” And so was Espinosa.

But he’s also thrilled to be back cooking for the public again. He’s content to start small and build a local staff. “I will be a good employer, paying them good money and teaching them how to cook. When I get sorted out financially, I want to do a day, maybe every week or month, in which all the money will go the schools or a church or something. We live here. This was Dawn’s home, now it is our home.”

Espinosa says he is committed to doing as much as possible locally, including procuring produce and meeting his new neighbors.

“When I get some good people working with me, I will be able to go out and talk to the customers. I like that part a lot, too,”  he said.