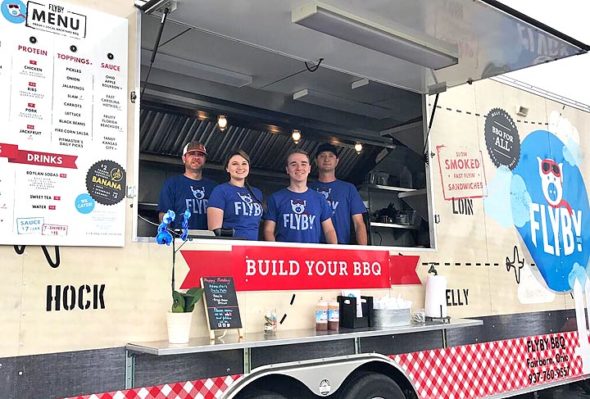 David Butcher, a 2015 YSHS graduate, is the owner-operator of Flyby BBQ, a flourishing area food truck business he started last year. Butcher, pictured center front with his crew, will be rolling into town on Wednesday, Aug. 16, to offer “build-your-own” barbecue in the Nipper’s Corner parking lot, from 11 a.m. until the food is gone. (Submitted photo)

ROLLING RESTAURANTS
This is the third in a series of articles profiling food trucks that frequent the village.

“This is project-based learning in its true form,” 2015 Yellow Springs High School graduate David Butcher says of his food-truck business Flyby BBQ that will be in the village on Aug. 16. At only 20 years old, Butcher has several business ventures of varying success behind him. His latest is taking off.

“I come from a huge Catholic family,” he said at a recent interview in Flyby’s Fairborn offices. “We always had barbecues together. My family in Yugoslavia were butchers, hence the trade name as a surname. When I got to Ohio State University, I was missing my family and our food.” He paused. “And I noticed that there wasn’t a really good place to get barbecue close to campus.”

Butcher researched what would be involved in starting a restaurant, and quickly discovered that the process is filled with potential landmines. In 2008, after the financial collapse, many restaurants closed their doors, Butcher explained. Chefs and restaurateurs began taking stock of their approach to food service and soon the food truck movement was born.

“One of the challenges with brick and mortar locations is that so much capital is required up front, and then you start trying to build up a customer base. Food trucks allow you to build the base, fine tune your offerings, and then establish a set location,” Butcher said.

It also requires tenacity and a desire to learn. While still in high school, he ran a successful deejay service. Arriving at Ohio State, he immediately began living on a shared floor in the dorms with other marketing majors and entrepreneurs. They were visited regularly by scholars and guest speakers, and Butcher said it gave him a sense of belonging.

“I was never much of an athlete, but I love competition. When I discovered that you can win trophies for business pitches, I was thrilled,” he said.

Butcher joined the campus Business Builders Club and began brainstorming. His first concept concerning new packaging for beverages was a dead-end. Frustrated, he went home and had a eureka moment.

“The answer was in front of me the whole time,” he said. “No one is making barbecue for millennials. There are no fast-casual options like there are with Italian or Chinese food. It felt right, like something I wanted to do. And that hadn’t happened for a long time. It was fun to be working on it.”

Work on it he did. In 2016, he won first place in the Business Builders Club idea pitch contest, the Fisher Business Plan competition, and in December he took home the top prize for “OSU Best of Student Startups” contest. Together, these garnered $10,000.

“I then had to decide how to parlay that money into a business. Where to start? Menu? Branding? I was stuck, so I went to the people living on my floor and they said, ‘You’ve gotta have a product, even if it isn’t good,’” Butcher said.

In his own kitchen, Butcher began making sauces. He used a combination of family recipes and what he learned from talking to dozens, if not hundreds, of people. In fact, Butcher used the money to travel to Kansas City, Chicago and Denver to discover the nuances of flavor and presentation. He alighted upon a concept: sauces in the various styles of different places, including an Ohio sauce as a signature.

“I’m not a back of house guy, but once again the answer was right in front of me. My cousin, Mark [Butcher], has a culinary degree, was a short order cook for 20 years, and he was working as an electrician and hated it. I said, ‘Come be crazy and do this with me.’ We were off and running,” he said.

They developed the menu through a beta concept, in which the small but growing crew would “fly-by” people’s houses, set up fixings in the kitchen, and act as a casual catering service. The first one was at a friend’s Fourth of July party last year, in which the food was free and all people had to offer was feedback.

“We learned so much from that and tweaked as needed,” Butcher said. They soon began charging and their company calendar was filled. “Soon we had raised enough money from the fly-by events to purchase our truck.”

Butcher explained that barbecue is notoriously difficult to do with a food truck, so top priority has to be freshness and boldness of flavors. The cousins sought out premier ingredients and discovered their most important tool: time.

“Lots of places will precook meat, and then finish it in an oven or with some other method. We slow cook ours, starting days in advance. No meat is cooked over 225 degrees. That requires patience and care. We hand chop all our ingredients. We absolutely do not cut any corners. Food quality is our top priority,” Butcher said.

Somehow, despite working full-time hours, David Butcher is still attending Ohio State University as a full-time student, soon to enter his third year. When asked how he does it, Butcher laughed.

“Well, I love what I am doing. And instead of being worried about my GPA, I worry about learning things. If I go to a test and do poorly, I know I did the best I could with the time I have,” he said.

Business is very good. He and Mark are adding employees and scoping out locations for a restaurant.

“We’re thinking in the commerce park [in Fairborn on Dayton-Yellow Springs Road] or by Fairfield Commons. We want to show that we can compete in the marketplace,” he said.

The Flyby BBQ truck will be in Yellow Springs at Nipper’s Corner on Wednesday, Aug. 16, from 11a.m. until they sell out. To learn more, go to flybybbq.com.