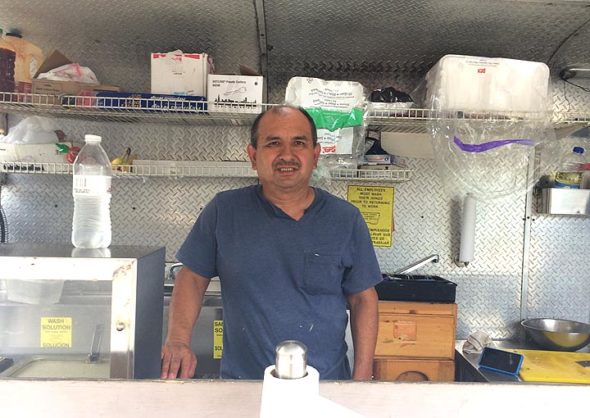 Crisbin Antonio has been offering bourbon chicken from his food truck parked in the lot at Nipper’s Corner for almost eight years. Originally from Mexico, Antonio learned to make bourbon chicken at the Fairfield Commons mall food court, then later took the dish on the festival circuit before bringing his business to Yellow Springs. (photo by Aaron Maurice Saari)

ROLLING RESTAURANTS
This is the second in a series of articles profiling food trucks that frequent the village.

“Thank you for giving me the opportunity to serve you. I give you a fair price and good food.”

These are the words of Crisbin Antonio, whose face and New Orleans Grill food truck are likely more familiar to villagers than is his name. He’s been in the same spot for nearly eight years, between the Post Office and Nipper’s Corner, selling bourbon chicken. As he is from Mexico, this reporter’s question out of the gate was, “How did you come to decide on a New Orleans-based menu?”

Twenty-five years ago, Antonio left Mexico for work in the United States. First in Los Angeles and then in Chicago, he worked at Chinese restaurants. After eight years and working multiple jobs, he decided to take a full-time position at Tumbleweed, a corporate chain restaurant.

Ten years ago, he left Chicago and settled in the Miami Valley. He quickly found a job with a bourbon chicken stand in the food court at Fairfield Commons mall. An ill-fated partnership collapsed that business after three years, but the more responsible of the two partners sought out Antonio to take another shot at selling bourbon chicken. They agreed to terms, and Antonio began a tour of local festivals. The sales were good, but not enough to provide a living and money to send back to family in Mexico, so he had to work other jobs.

After a few years on the festival circuit, Antonio decided to go into business for himself. While he wanted to make money, he also took into consideration where he’d like to spend his working days.

“I can be anywhere else,” he said — but Yellow Springs is special to him. “I like the view, I like the people.”

The menu focuses on bourbon chicken, as one might expect, with offerings of cut or whole pieces over rice or on a sandwich. Rice is served mild or spicy, and red pinto beans can be added to other dishes or purchased as a side. Small and large servings are offered, with no single item costing more than $10. The signature element, though, is the sauce. Antonio balances the sharpness of the bourbon with a sweetness that does not overpower. Freshly cut raw onions and peppers are complimentary to those who serve themselves.

“Everything is made fresh each day,” Antonio said after serving several customers who came during a recent interview. It is not uncommon for Antonio, his father or his son to be doing prep work as Antonio serves and chats with customers. Over the years he has established a reputation, both in Yellow Springs and beyond.

“If I miss a day, or when we shut down for the winter, I get calls from people asking where I am. I start here with the Street Fairs, and people from Columbus, Kettering, everywhere would ask me if I was going to be at the next one.”

In the first years of the business, Antonio did not have the trailer that he utilizes now. He cooked and served under a basic canopy tent. This quickly grew tiring, especially having to pack everything up at the end of a long day, only to set it up the next morning. Antonio’s brother helped him purchase the trailer that currently sits in the parking lot of the gas station.

The money Antonio makes helps him not only to assist family in Mexico, but also to return home. I asked him if he was planning on returning soon. He paused a moment.

“My brother and I used to drive home, but the banditos are so bad they’ll kill you just for your car. I don’t think I can do it anymore,” Antonio said, adding that he had almost died three times. “They’ll kill you and no one will ever find your body.”

Antonio might retire in a few years, but he’s uncertain. He has diabetes and while he feels healthy, he says, “my body has other ideas.” The recent heat has been difficult for him, especially when cooking. Antonio is also unsure of whether he will return to Mexico or stay in the United States, even with the violence in his homeland.

“It’s hard when you don’t speak the language so good,” he said. “When you have no community it is hard. In Mexico, we don’t stay in our houses. We get together to laugh and share. In America everyone seems to just go into their homes and stay to themselves.”

For Antonio, though, Yellow Springs seems an exception, which is one of the things that keeps him here.

“I have lots of local customers and I like seeing them, talking to them. And I like hearing that they like my food,” he said, smiling.

Visit the New Orleans Grill daily from 11 a.m. to 8 p.m. until October.