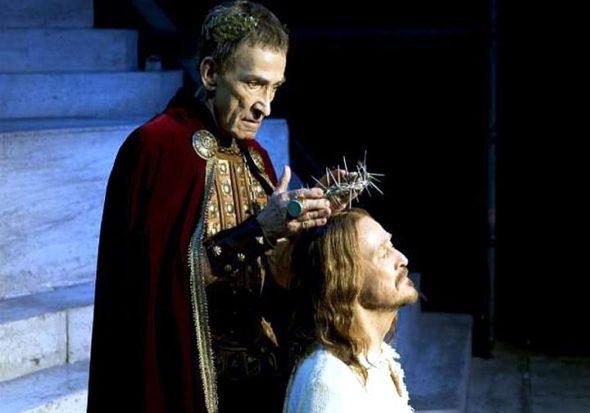 Ted Neeley, seated, will return to Yellow Springs to speak at three special showings of “Jesus Christ Superstar” at the Little Art Theatre, at 7 p.m. Nov. 10 and 11, and a sing-along event at 2 p.m. Nov. 12. He’s shown here with co-star Barry Dennen, who died recently. (Submitted photo)

In the rock opera “Jesus Christ Superstar,” the first time that Jesus meets the Roman procurator who will sentence him to death is during a song called “Pilate and Christ.” For Ted Neeley, who returns to the Little Art Theatre for special viewings of the film on Nov. 10 and 11 at 7 p.m., and a sing-along on Nov. 12 at 2 p.m., this scene was shared for decades by his dear friend, Barry Dennen. Just a few days before Neeley and I recently spoke, Barry had died suddenly.

Neeley has now lost his two best friends in the world; Carl Anderson played Judas until his death from cancer in 2004. For a man who has sung the rock opera thousands upon thousands of times, who is generous beyond measure to those who think of him as a living avatar of Christ, these events post-Barry are a chance for Neeley to talk about the significant influence of his dear friends.

On the News website at ysnews.com, you’ll find a piece about the conversation Neeley and I had regarding God and Christ. Here, though, I want to share a story Neeley related, often peppering it with “a long story gettin’ longer” as he added new details, about his friends.

Years ago, Neeley was starring in a production of “Tommy” in Los Angeles. They were in the final week of rehearsals when Neeley heard that acclaimed director Norman Jewison was in town casting for the upcoming film version of “Superstar.” Neeley, who had first been an understudy and then starred as Jesus in the Broadway production, wanted to get word to Jewison that “a bowlegged, screaming drummer from Texas” wanted to be part of the film, even if it was to sweep up on the set.

Neeley reached out to his agent, asking that the latter invite Jewison to a performance of “Tommy.” Neeley insisted, however, that the agent not tell him when Jewison was coming, for fear nerves would get the better of him. “Tommy” is a very physical show, and Neeley is not a dancer. He was, however, pitched and tossed between muscular dancers as a pinball during the “Underscore.” One dancer responsible for catching him was out during the first Sunday performance, and the understudy stepped in. Both Neeley and the understudy misjudged a toss, falling onto the set and were knocked out cold.

Norman Jewison came to the next show, in which Neeley was replaced by his understudy.

Neeley’s agent was apoplectic, but after hearing the reasons, arranged for Neeley to meet Jewison at a hotel before the latter returned to London. He advised Neeley, though, that the show was already cast. Ever an honest and genuine soul, Neeley replied that he just wanted to thank the esteemed director for making a film version of the rock opera.

Neeley went to the hotel, had a quick conversation with Jewison through his room door, and was directed to the coffee shop in the lobby. Not a regular coffee drinker, Neeley consumed an entire pot before concluding that Jewison was not coming, a gentle rebuke for the previous night. Paying for the check, Neeley felt a tap on his shoulder. There stood Norman Jewison.

A conversation unfolded in which Jewison made it clear that the principals were cast; when Neeley offered to pay for a screen test, which he couldn’t afford and didn’t know what it entailed, Jewison laughed heartily. Neeley left thinking all was settled, and he was not to be part of the film.

Several months later, Neeley and Carl Anderson were rehearsing for the first ever national tour of “Superstar.” Neeley received a call from “Norman,” whom Neeley thought was his uncle. Identities confirmed, Jewison said that “many people” were telling him to give Neeley a screen test, which he was going to do. However, Neeley couldn’t tell anyone. When he learned that he was being tested for Jesus, Neeley asked that Carl be tested with him. Jewison agreed.

The pair was flown to London. Carl performed “Heaven on Their Minds.” Neeley, “Gethsemane.” The crew burst into applause, and Jewison requested they do “The Argument,” which Carl and Neeley had just been rehearsing. As they flew back, the friends marveled at how they had just undergone the experience of a lifetime.

A week later, a 3 a.m. phone call from Jewison informed them that they were his Jesus and Judas.

While in London, pre-recording before going to film on location in Israel, Neeley, Carl, Barry and Norman went to dinner together. Jewison said, “I told you that many people had spoken to me about needing to give you a screen test. What made me make my final decision to call Neeley, who then recommended Carl, was Barry Dennen.”

Neeley says they toasted Barry that night with fine Italian wine, and that he has been toasting him ever since.

**This post has been updated to reflect Carl Anderson’s death in 2004, not 2005 as originally reported.