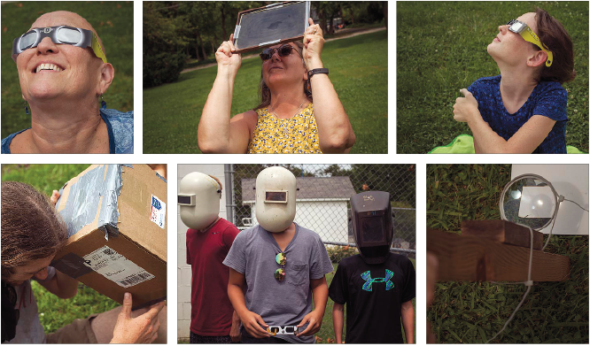 Yellow Springers — and most of the United States — spent the afternoon of Aug. 21 staring up at a waning midday sun as the moon moved across its face. The eclipse was partial here — 89 percent — but still well worth seeing. From top, clockwise, Karen Gardner caught a glimpse; Rebecca Holihan went old-school with a plate of candle-sooted glass; Olive Cooper glanced up; a lens focused the image safely on a white piece of paper; Gavin Van Meter, Trinidad Speck and Quinn Van Meter wielded welding masks, a safe yet slightly creepy viewing apparatus; James Crawford used a pinhole box to image the phenomenon. (Submitted photos by Matthew Collins)

Villagers were stunned in January by the murders of village roofing business owner William “Skip” Brown and his East Enon Road neighbor, Sherri Mendenhall. Brown was the great-grandson of well-known Yellow Springs photographer Axel Bahnsen and the grandson of longtime villager Elaine Brown.

Police, the county sheriff and the Attorney General’s Bureau of Criminal Investigation, or BCI, were called to the apartments of Brown and Mendenhall in mid-January when the bodies were discovered. About a week later, suspects Dustin and Brett Merrick were arrested at their Xenia homes. Dustin Merrick had worked for Brown, and the two young men were the stepsons of his brother. As of this time, no motive for the murder is known.

In April the two Merricks were both indicted for aggravated murder and aggravated burglary. The indictments mean the two men are likely to face the death penalty.

Still reeling from the election of Donald Trump as president, many villagers took to the streets to protest his inauguration. One locally chartered bus and many cars delivered Yellow Springs residents to the national Women’s March in Washington, D.C. in January, and many more traveled to Dayton for that city’s march. And in Yellow Springs, several hundred villagers marched through downtown in an event organized by middle-school students Carina Basora and Ava Schell in support of women’s rights.

In a January interview, Mills Park Hotel owners Jim and Libby Hammond said the new village hotel has been busier than expected. More than 5,000 reservations at the 26-room hotel had been made since its opening the previous spring, according to the owners.

In January, Gilah Pomeranz and Shep Anderson talked about their recent purchase of the former Do It Best Hardware, renamed the Yellow Springs Hardware. A Yellow Springs anchor for more than 90 years, the downtown store was purchased from former owner Kathy Macklemore.

And in February, Don and Christine Beard, owners of Peach’s Grill, announced they had purchased Ye Olde Trail Tavern, the village’s oldest business, from Cathy Christian, who had owned it for 30 years.

In February, about 90 villagers showed up at the local US Bank to protest the parent bank’s involvement in companies linked to the Dakota Access pipeline on the Lakota Reservation in North Dakota. Protestors asked the bank to divest of any involvement with pipeline investors, and several said they were closing their accounts at the bank. An effort to persuade the Village to divest its assets from US Bank proved unsuccessful.

In late February, villagers learned that the Arnovitz farm on the western edge of Yellow Springs would be auctioned off in March. The farm’s importance to the Jacoby Green Belt, the greenspace that surrounds Yellow Springs, was emphasized by Tecumseh Land Trust Director Krista Magaw. Village Council pledged up to $200,000 of its greenspace fund to help purchase part of the land.

With the help of local donations, Community Solutions bought a significant 128-acre portion of the farm for about $655,000. The portion was especially important because it contains tributaries to Jacoby Creek, which can affect the local water supply.

Throughout the year Community Solutions leaders met with villagers and stakeholders to identify community-oriented potential uses for the land. In October group leaders told the News that the land would be used for environmental and educational purposes.

In December, TLT was notified that it had received $1.44 million in federal funding to help protect the watersheds around Jacoby Creek and Yellow Springs Creek.

In March, Millworks owners announced that the business park is on the market. The four-acre business and office park is home to about seven local businesses, including Enviroflight, Yellow Springs Brewery and S&G Distillery. Current owners are Rod and Ellen Hoover and Sandy Love and Sam Young.

In March, the Rev. Aaron Saari of the First Presbyterian Church, along with Ryan Stinson and Anna Burke, launched the Beloved Community Project. The group aims to host regular liturgia events that focus on community-building and addressing the issues of hunger, inclusion, racism, poverty and justice.

In early May, two local levies passed handily. A 2.4 mill bond issue from Miami Township will provide $5.75 million for a new fire station, while the schools also passed their operating levy, which provides $915,000 yearly for the schools, or 11 percent of their total funding.

At the end of May, longtime local store Rita Caz closed its doors, due to the retirement of owners Mark Crockett and Gail Zimmerman. The store’s neighbor, House of AUM, expanded into the former Rita Caz building.

In June, the board of the Yellow Springs Community Children’s Center announced that Director Mary Stukenburg, who had turned the center around after several years of low enrollment and financial instability, was leaving her position in a mutual agreement with the board. After a search of several months, Malissa Doster was hired in November to lead the center.

In the summer, a variety of villagers announced their intentions to run for local office, launching what turned out to be an unusually robust election season. The retirement of Mayor Dave Foubert set the stage for an especially lively mayoral race, with at one point eight hopefuls. Ultimately, though, four candidates — Pam Conine, Laura Curliss, Cathy Price and Gerry Simms —  filed petitions for the position in August.

The 365 Project began assembling a Yellow Springs encyclopedia with a focus on the contributions of African American villagers.

In August, owner Jonathan Brown announced that he had put the historic Union School House on the market, after owning the building for 22 years, during which time it housed artists’ studios.

In August, the News reported that the Environmental Protection Agency is studying vapor levels in the Omar Circle neighborhood from toxic chemicals in underground plumes caused by improper storage of contaminants by Vernay Laboratories years ago. The focus on vapors is the newest iteration of the proposed cleanup by Vernay.

While the EPA ordered the Vernay cleanup in 2002, the two entities have not yet agreed on a cleanup plan.

In September, members of Village Mediation celebrated their 30-year anniveersary.

And Community Solutions presented its annual conference, this year focused on “The Economics of Happiness.”

In November, Friends Care Community announced that Mike Montgomery, the current director of Grace Brethren Village in Englewood, would take the reins of the local extended-care facility following the retirement of Karl Zalar.

Local efforts to aid the world

In December, two events drew many villagers who sought a way to donate to far-flung concerns.

The First Presbyterian Church sponsored a well-attended soup supper to raise money for hurricane-raged Puerto Rico, while Beth Holyoke and Kaethi Seidl held a fundraiser at the Yellow Springs Brewery for nonprofits that are helping refugees on the Greek island of Lesbos.