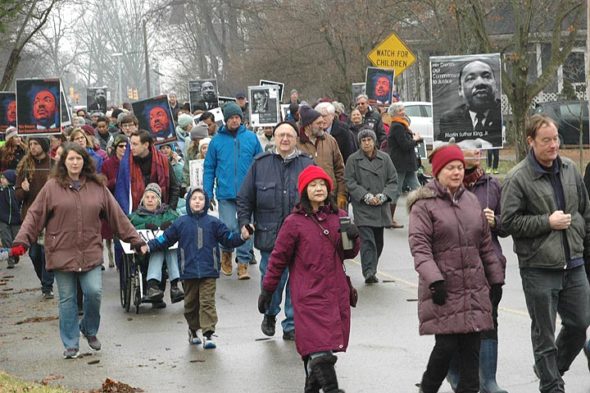 The local celebration of the birthday of civil rights icon Dr. Martin Luther King Jr. takes place on Monday, Jan. 15, at 11 a.m. at Bryan Community Center gym, a new location. Marchers will congregate at 10 a.m. in the Subway parking lot that day for the march downtown that precedes the event. Shown above is the 2017 MLK march, which was attended by hundreds although the weather was frigid. (News archive photo by Matt Minde)

It was a year of upheaval. In 1968, blood flowed in the streets of Chicago, Paris, Prague and Mexico City as thousands of protesters clashed with police over the war in Vietnam, human rights and political repression.

It was a time of turbulent events. In the January Tet Offensive, the Viet Cong attacked the U.S. embassy in Saigon. In March, President Lyndon Johnson called it quits. In June, Robert F. Kennedy succumbed to an assassin’s bullet in Los Angeles. In the summer Olympics, African-American medalists Tommie Smith and John Carlos raised their fists in protest during the national anthem.

And on April 4, the Rev. Martin Luther King Jr. was gunned down as he stood on the second-floor balcony of the Lorraine Motel in Memphis, Tenn.

This year marks the 50th anniversary of the civil rights leader’s death. And to celebrate his legacy, the 2018 Yellow Springs Martin Luther King Jr. Day program has adopted a timely theme: “Courage to Take a Stand.”

“We chose the theme in part to address the current political environment,” said Bomani Moyenda, one of the program organizers, in an interview this week. “After so much work and so much progress over the years, we have this complete reversal directed by this inhumane person in the White House.”

Moyenda, who is a case manager for a Dayton organization that provides services for the homeless, said there’s a rising tide of racism that’s swept across the country ever since Donald Trump began his campaign in 2015.

“So the theme serves as a reminder for all of us to dig in, double down, and more actively organize and keep fighting the good fight,” he said.

Martin Luther King Jr. Day (MLK) activities will begin on Sunday, Jan. 14, at the First Presbyterian Church and run from 2  to 4 p.m. with a teach-in and sign-painting session.

“It’s an event for all ages,” said Kevin McGruder, assistant professor of history at Antioch College and one of the program organizers.

“We encourage people to bring their children. There will be opportunities to learn about the civil rights movement and some of the issues of today.”

The programming will continue the next day at 9 a.m. on Monday, Jan. 15, Dr. King’s birthday, at the Coretta Scott King Center at Antioch College. At that time, organizers and participants will discuss writings related to the theme of “The Courage to Take a Stand.”

At 10 a.m., organizers and participants will gather at the parking lot on the corner of Xenia Avenue and Corry Street, next to the Subway restaurant, with signs and banners for the scheduled MLK peace march.

The march will begin at 10:15 a.m. and follow a route heading south on Xenia Avenue to Limestone Street, turning west to Walnut Street, and then turning north to Dayton Street. From there, the march will proceed east to the John Bryan Center, the new location for this year’s MLK program.

The Monday, Jan. 15, program will begin at 11 a.m. in the John Bryan Center gym, and will include the World House Choir, the Bahá’í Dance group, several local poets and peacemaker essays read by three Yellow Springs students.

“There’s a competition we do every year in the schools,” McGruder said. “And the coordinator of that competition selects an elementary, middle school and high school student who will each read an essay related to the theme of ‘Courage to Take a Stand.’”

The program also will include the presentation of the annual Community Peace Maker award.

The “Courage to Take a Stand” program, scheduled to conclude shortly after noon, will be followed by a soup and sandwich lunch in the John Bryan Center gym.

McGruder said that to this day some people are confused about Martin Luther King Jr.’s message.

“He was very clear that things could improve, but that didn’t mean the [civil rights] struggle wasn’t going to continue to exist,” McGruder said. “Those who believed in freedom needed to be prepared to struggle to achieve it.  Often people view his ‘I Have a Dream’ speech as a fantasy. But they don’t understand that it was a vision, and he was setting that vision as if to say, ‘We’ve got to work to achieve this,’ not that it exists now, but that we need to achieve it.”

McGruder said that King’s widow, Coretta Scott King, believed that freedom had to be fought for by each generation.

“When we acknowledge that, it’s not so surprising that we’re continuing to work against things that people thought had been settled,” he said.

Throughout their lives Dr. King and his wife spoke out against systemic racism and the need to dismantle systems that support discrimination, according to McGruder.

“And that’s what a lot of people ignore when they try to sanitize what Dr. King Jr. was doing and what he was trying to achieve,” he said. “At the time of his death Dr. King was speaking out against worldwide systems, particularly the war in Vietnam. And he was making links between American racism and international American dominance in the world and saying that those things needed to be fought against. And that’s why he was so threatening.”

Dr. King’s birthday is an important time to honor the civil rights leader, Moyenda said. And while race relations have improved over the past 50 years, as evidenced by the election of an African-American president in 2008, there is still a long way to go.

“I think there was a huge upsurge of hate groups after Barack Obama was elected,” he said.  “So racism has been simmering.” He added that Donald Trump’s rhetoric during the presidential primaries added fuel to a new wave of racial discord.

“This should be a wake up call. We can’t afford to go to sleep on this guy. We have to do some organizing to stop all these inhumane policies he’s pushing through.”

Moyenda agrees that in order to create change more people need to get out and vote.

“But more important than voting is organizing,” he said. “And that’s because [Trump] is pushing through policies now, and it’s going to take people organizing to stop some of the madness that’s coming out of the White House. Voting is something you can do every two years, every four years. But we have to pay more attention to what’s happening between elections.”

The work will continue, he believes.

“We can’t just sit back and wait for the next election while they’re pushing these policies. We need to organize, educate people and figure out ways to block and reverse what’s going on.”