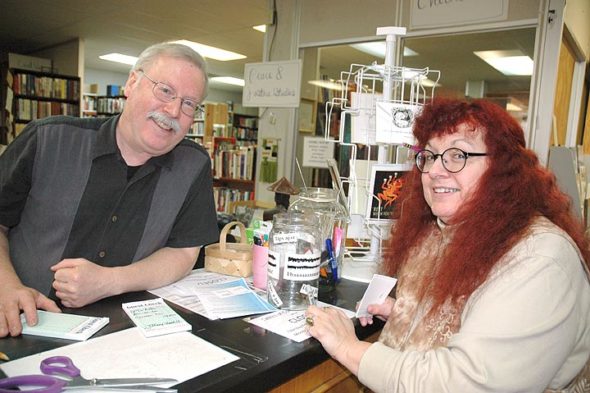 Xenia's Blue Jacket Books will close for good May 12, with a progressive sale beginning March 5. But Blue Jacket's popular in-store cafe, Tables of Contents, has no plans to close, according to owner Lawrence Hammar, pictured here with bookstore employee Yvonne Wingard. Bookstore and cafe are owned by Yellow Springs residents Hammar and his wife Cassandra Lee, who operates the cafe. (Photo by Audrey Hackett)

Blue Jacket to close, but in-store cafe to stay

Blue Jacket Books in Xenia is closing. But its popular in-store cafe, Tables of Contents, is staying open — and may be expanding in coming months as owners Lawrence Hammar and Cassandra Lee figure out what else to do with the 6,000 square-foot space they’re renting, and intend to go on renting, in downtown Xenia.

“The coming demise of [Blue Jacket] is heartbreaking and hard to understand,” wrote Ed Davis, of Yellow Springs.

Declining in-store sales and a “terrible” holiday season forced the decision to close, according to Hammar in an interview this week. The couple, who lives in Yellow Springs, purchased the store in 2011 from its founder, and moved to their current location, 30 S. Detroit St. in Xenia, in early 2013. Lee opened the cafe just over two years ago, having run restaurants in the couple’s former home city of Portland, Ore. She operates the cafe with chef James Luckett, also of Yellow Springs.

In an interview with the News two years ago, Lee said she hoped the cafe would draw business to the bookstore. But that hasn’t been the case, according to Hammar this week.

“The symbiosis we were hoping for has not happened,” he said. The cafe is breaking even, while the bookstore is losing money, he added.

Blue Jacket will close its doors for good Saturday, May 12. A progressive sale starts March 5, with discounts increasing every two weeks. Hammar hopes to sell off much of the store’s inventory of 45,000 books, plus shelving and other items. He will continue to sell some books online.

Read an in-depth story about Blue Jacket’s closing in the March 1 issue of the News.