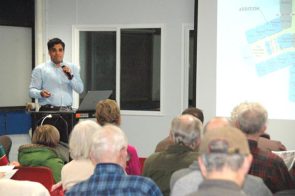 Questions about time frame and concerns about health and safety predominated  at the community discussion Thursday, March 1, when an estimated 75 people attended a public forum presented by the Yellow Springs School District to consider the district’s plan for upgrading the middle and high school campus.

The district is seeking nearly $18.5 million through a combined 4.7-mill property tax and 0.25 percent income tax on the May 8 ballot to proceed with a proposed renovation and rebuilding project at the middle/high school on East Enon Road.

The proposed levy would cost a typical Yellow Springs household $403 more per year in addition to the $2,369 such a household currently pays in property and income tax to the local schools, based on the median village income of $62,500 and a home appraised at $150,000.

Addressing the March 1 gathering, Superintendent Mario Basora said he understands that affordability and the cost of living in the village is a concern for many residents. At the same time, he  said he feels the viability of  local schools is at stake.

“It’s very real to me — we are in competition,” he said, noting that every other district in Greene County, and every district contiguous to Yellow Springs has  constructed new school buildings in the past decade.

“We need to show we are investing in our schools,” he said.

In the course of the 90-minute meeting in the high school cafeteria, the district opened by presenting an outline of the middle/high school plans, spent a period responding to questions and comments from about 10 people in attendance and concluded with an appeal related to the district’s facility needs.

Basora stressed that the proposed project is “the community’s plan,” initiated by the goals of the 2020 strategic plan and developed over a year-long process of community engagement, including public meetings and a phone survey.

“I was always a fan, and thought it a great idea, to have a K–12 facility at Mills Lawn,” Basora said. But after resident feedback, “it was clear that that was not what the community wanted.”

With more pressing concerns at the middle/high school — particularly with the so-called “shoebox,” a modular unit that was set up in 1988 as a temporary structure for middle school classrooms — the district intends to start there, waiting to address Mills Lawn at an unspecified time in the future.

Architect Mike Ruetschle, whose firm has worked with the district as it developed a facilities proposal, described the resulting middle/high school plan as “an addition/renovation,” which “keeps about half of the current facility.”

The plan calls for the demolition of the “shoebox” as well as the current band room and the three-story portion of the high school.

Building plans include a new entryway with a secured vestibule, a new band room that would also serve as a storm shelter for the entire school population, a new kitchen and a one-story, three-wing “academic core” addition with new classrooms and collaborative work spaces. Features of the “core” space include window-filled interior walls and outdoor patios at the end of each wing

Renovations will be made to the gym, which was built in 1963, as well as the classroom additions constructed on the west side of the gym in 2002.

Basora said that if the ballot measure is approved in May, the first step is to secure an architect to complete the design. Finalizing the design takes about a year, he said. Site work is then expected to take another 18 months, with completion anticipated for the fall of 2021.

“This year’s eighth-graders will be seniors,” Basora said.

Ruetschle said that the work will be completed in a serious of steps in hopes of limiting schooling disruptions. Temporary classroom units will be erected on the west side of the school, followed by demolition with the “shoebox” before moving to the three-story structure.  Construction of the new one-story academic core will follow, and renovations will occur last.

Part of the demolition will include “abatement” work, which is the removal of hazardous wastes, such as asbestos.

Resident and district champion Richard Lapedes asked to hear more about the need for hazardous material removal. Ruetschle said that asbestos wrapping used to insulate pipes would need to be removed before other work could take place. There is no health danger to students with the asbestos in the walls, but tearing into the building necessitated its safe removal, he said. Basora estimated that the district faces about $900,000 districtwide in asbestos removal costs.

Bob Barcus, the husband of school board President Aïda Merhemic, followed up, asking if the district has other health and safety concerns.

School board member Steve Conn responded, listing several issues of which he is aware. For one, “on the second floor (of the three-story structure), walls are separating from the floor,” he said. He also said that the building is “not very functional” in terms of ADA (Americans with Disabilities Act) requirements, and cited “water issues in the basement.” Also, student traffic in the stairwells “doesn’t work well.”

Basora added that there is “a well-documented history of bats in the building. And when you see one bat, you have a colony.”

Parent Angela Brintlinger, who is married to board member Conn, echoed that stairwell traffic is an issue, as is the location of lockers on the second floor, causing access difficulties between classes.

The proposal of a one-story academic core would eliminate these issues, she said.

“I’m really excited” about the plans, she said. “I’m also really sad none of my kids will be here (when it’s completed).”

Brintlinger added that she is especially excited about the proposal to build outside patios at the end of each of the three wings of the new academic core. “I think that’s a really fantastic feature,” she said.

Basora said that the outside areas are designed with the intention of getting students outdoors as much as possible.

The doors there will also offer additional places to exit the building in the case of an emergency, Basora noted, responding to a concern voiced by special education teacher Donna Haller about school safety.

Referring to recent high-profile school shootings, Basora said that the ALICE protocol the district follows instructs students to run, hide and fight, in that order. The destructiveness of the weapons often used, however, has made running — and getting away — the only real viable choice, he said, adding that the proposed new layout makes that more possible.

A safety concern was also raised about the district’s intention to include a significant amount of glass in the walls of the academic core space. Basora said that he felt heightened visibility increased safety.

Ruetschle noted that more glass also had a positive environmental impact in terms of heating.

For resident Dave Turner, however, a potential issue with glass between classrooms is the possibility of creating a source of distraction for students. Basora said distraction has not been an issue at other schools that have implemented a similar design. “It’s a nonissue after a day or two,” he said.

Continuing on the topic of health and safety, Basora said that the plans for a new kitchen would allow staff to prepare fresh, and thus healthier, meals. Currently meals are made ahead, frozen and then reheated, he said.

Class size was on the mind of parent Kate Anderson, who asked, “What’s the maximum number of students who can go in a classroom?”

Basora said that the district seeks to keep class sizes at 18–20 students, adding that enrollment over the next 10 years is expected to be 775. That represents a slight increase in the 740-some students currently enrolled, more than a quarter of whom come through open enrollment.

He said that the most important facilities issues for him are providing “safe and quality schools” and the district’s assessment that “the current building does not meet the needs of our learners.”

While there was little criticism of the plan or the  proposed ballot measure to support it during the meeting, resident Richard Zopf  expressed frustration afterward that the district wasn’t talking about plans, and accompanying additional costs, for the elementary school as well.

Resident Pat Stempfly, however, said she was impressed with the district’s current plans as she took a closer look at a large poster of the proposed middle/high school layout.