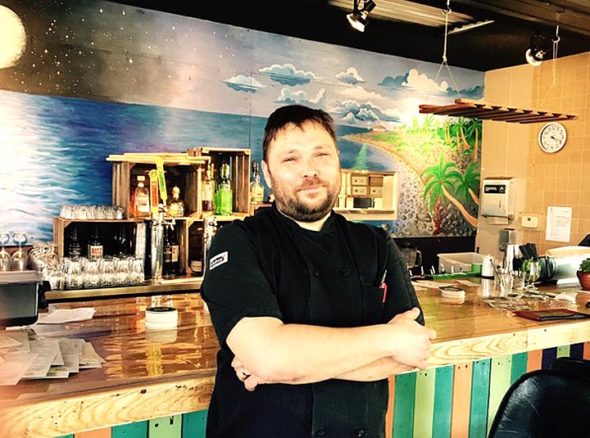 Brian Rainey, chef and owner of the Sunrise Cafe, recently opened the Calypso Grill on the south edge of town, in the former home of Dona Margarota’s. The restaurant features Caribbean, Cuban and South American dishes. (Photo by Holly Hudson)

It was a trip to Cayman Brac, one of the Cayman Islands, a couple of years ago with his wife, Amy, that gave chef Brian Rainey the idea for Calypso Grill. And it was actually Barry’s Golden Jerk Chicken Shack that made him want to create a version of the same thing here in Yellow Springs.

The set up was pure simplicity: a small 12 by 12 foot building, a refrigerator and warmer inside and the outside lined with charcoal grills, only open three days a week with customers lining up continuously throughout the day to sample Barry’s famous jerk chicken. It was the kind of place that would feature in an Anthony Bourdain cooking and travel show. According to Rainey, the chicken was seriously amazing and he says, “when I got back from Cayman, that was my first dinner special.”

Rainey would have been happy with a jerk chicken and serving it with corn fritters and cole slaw all day long, just like Barry, whom he became friendly with while there. People would drive up to his stand, stick a hand out their car window and hold up a number of fingers for however many orders they wanted. But as things go, the opportunity to take over the restaurant space recently occupied by Doña Margarota’s Mexican restaurant came up, which as Rainey says, in a town with limited real estate space, “sometimes you just have to hop on what’s available if you want to do something.”

Villagers will no doubt be happy he did, as Calypso Grill’s opening at the end of March proved that the town is hungry for another culinary option. The restaurant did so well its opening weekend Rainey had to close down temporarily after running out of food.

“I thought we were ready and we had enough food but it was crazy busy and we went through the brisket in one day,” he said. The whole staff had been working 17-hour days in preparation for opening, they decided to get some rest, regroup, and reopen last weekend.

Since his first trip to the Caribbean, Rainey’s obsession with the food has grown deeper. He will immerse himself in discovering and trying out new recipes until he comes up with his own take on a dish.

“I don’t get out much so being a cookbook nerd is how I learn things,” he said.

As with Barry’s Jerk Chicken, he has put his own spin on the Brac Island classic. Rainey credits his wife, Amy, for putting up with his many culinary adventures.

When the opportunity came up to take over the building on the southern edge of town, which has been home to numerous restaurants over the years, Rainey was vying between making it Caribbean or Asian fusion. In the end, the former won out. He and his wife are also the owners of Sunrise Café, which they have been running for nearly 14 years. On that experience, in contrast to opening Calypso Grill, he says, he “learned how not to lose money the hard way.”

Opening Sunrise was more turnkey as he was taking the restaurant over from Jonathan Brown, the previous owner. Brown was ready to retire at the time and Brian and Amy Rainey were “young and gung-ho and it was the opportunity of a lifetime. He made it very doable for us.”

Calypso Grill has been more of a soup-to-nuts, all-in process to get it up and running. Rainey is leasing the building and all the equipment from the owner of Doña Margarota’s, who was kind enough to throw in the liquor license to their agreement. There has been plenty to deal with in terms of meeting all the inspection requirements for the health department, fire department, and building inspectors, he said.

Rainey admits with a laugh that he’s lost track of the number of times he’s been asked “you’re not going to use those fluorescent lights are you?” He was perplexed at first but then once he got into the space, “I realized what they were talking about — one lady even said, ‘I’m getting old and it does not do me any justice here when I’m trying to have dinner with a ‘friend.’” Villagers can rest assured, the fluorescent lights are being replaced by more festive and tropical twinkly lighting.

Calypso Grill is hosting a full bar and there will be plenty of mojitos and ‘painkillers’ available. The painkiller is a drink of West Indian origin and very popular throughout the Caribbean.

“We went to St. John last year and that was the drink of that whole St. Thomas and St. John area,” Rainey said. “It was funny at the time I hadn’t had a painkiller before and we were riding the ferry to St. John and the guy was telling us, ‘now that island over there, the British one, they have the best painkillers in the world.’ And I’m thinking, what do I look like? And then we got there and someone served me a painkiller and I said, now I get it.”

The menu is full of classic Caribbean and Cuban dishes such as West Indian lamb curry, chicken pupa-Lickie, mojo pork and ropa vieja. There is a large focus on braised and slow-cooked meats.

“In Jamaica the correct way of cooking jerk chicken is to cook it over pimento wood, which is from the Allspice tree, so we’re importing it,” Rainey said. “I’m trying to make it as authentic as I possibly can. I want to walk the walk.”

Calypso is also sourcing all the meat locally. According to Rainey, as he does with Sunrise, all the chicken comes from Gerber Farms, the Amish farm in northern Ohio, the pork is from Buckihillz Farm, run by Owen Betts in Pitchin, and the brisket is from Longdale Farm, a sustainable family farm in South Charleston.

“I keep joking with the farmers to grow me some plantains, but no one’s come through yet,” he said.

Rainey has consciously set the prices lower than Sunrise for most of the entrees, something he can achieve by offering locally grown fare instead of certified organic. Entrees run between $10 and $12 for most dinners, with red snapper the most expensive item on the menu priced at $14.

Rainey is also is excited about the organic soda fountain line he is able to offer for the first time.

“I always wanted to have a fountain machine at Sunrise, but we just didn’t have room for it. It’s called Tractor brand and it specifically caters to restaurants for organic soda,” he said.

Calypso is also offering full time delivery, from 11 a.m. to 9 p.m. every day but Tuesday, and beer and wine can be ordered for delivery as well. Rainey can foresee serving dinner later than 9 pm, especially on the weekends and with the delivery option, he thinks there will be a demand for it.

Calypso Grill and Smokehouse looks set to become a Yellow Springs classic fairly quickly. Its hours are 11 a.m. to 9 p.m. every day but Tuesday, with again, full time delivery. The restaurant takes reservations for parties of five or more, but people can call ahead and get on a priority seating wait list for parties less than 5. Calypso Grill is located at 1535 Xenia Avenue and online at calypsogrill.net.