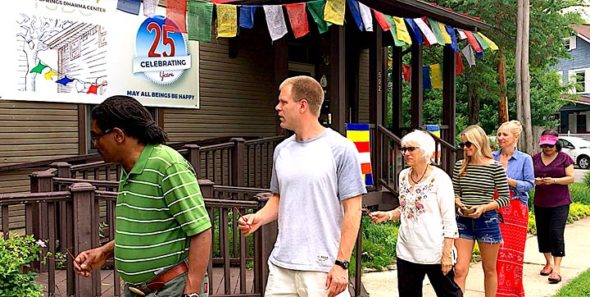 The feeling infused the air as trustees of the Yellow Springs Dharma Center sat down recently to talk about the center’s 25th anniversary this year.

Gathered around a kitchen table in an alcove off of the center’s main meditation room, Robert Pryor, Dianeah Wanicek, Donna Denman and MJ Gentile nodded in agreement.

Founded in 1993,  the Yellow Springs Dharma Center brought together members of the Antioch College community and village residents. It also created a space where followers of three distinct Buddhist traditions could feel at home in their individual practices.

“Some people think we all practice together, but we don’t do that,” said Pryor, the retired head of the former Buddhist studies program at Antioch. “The practices are still distinct.”

Those traditions are: Vipassana, also known as “Insight Meditation;” Vajrayana, which includes the concept of Dzogchen, or “Great Perfection;”  and Zen, a meditative practice that came out of Chinese traditions.

“We share, and we all get along,” Pryor said. “There’s an underlying tradition that’s common to all.”

That commonality flows from the original Buddha, of ancient India, from which the various branches of Buddhist teachings, also known as Dharma, arose.

“I like to think of it as the original Dharma before it went across the globe,” Wanicek said of the local center’s ecumenical focus.

That ecumenicism, in supporting “the integrity of each tradition, is unique in many ways to our center and our area,” Egart said.

The local center is also unique in that it has no resident or head teacher, though teachers from each of the traditions come in regularly for talks, workshops and retreats.

“We don’t have a top of a pyramid with a teacher who’s the main director,” Pryor said.

Highly regarded national and international teachers are frequently consulted, however, concerning questions of practice and philosophy, he added.

Forming relationships with teachers has been important for the center from the beginning, according to Wanicek, who is married to Pryor.

“We needed to make sure we had connections to our teachings,” she said.

But the biggest challenge in opening the center in 1993, was deciding “what color our [meditation floor] cushions were going to be,” founding member Donna Denman said with a chuckle.

Each tradition has its own associated color, Denman explained. The center founders agreed, however, on a deep blue, which was “neutral” in its affiliation, she said.

While founded in 1993, the local center actually dates its history further back, pointing to a visit by Japanese Buddhist teachers Yasutani Roshi and Kokai Fukui in 1963 as the beginning of recorded Buddhist studies in the village. Kukui then returned later that decade for a year-long residence in the Vale.

Particularly significant in the development of local practices that would coalesce in the Dharma Center was the implementation in 1979 of Antioch’s Education Abroad Buddhist Studies program to India, which Pryor led.

The return to campus — and the village — of students and other participants in the program seeded and invigorated local meditation practices.

Among those early practitioners was Denman, who with her husband, Al Denman, then head of philosophy and religious studies at Antioch, went on one of the early India sojourns. She said her introduction to Buddhist practice on that trip gave her “a sense of coming home.”

She was part of the group, which also included Pryor and Wanicek, who came together to rent space in the house the center continues to call home. (Before securing its permanent home, the group met in individual residences in the same neighborhood, a flag in a participant’s yard indicating the meditation location.)

Ten years later, in 2003, they purchased their building, and in 2014, they paid off the mortgage.

Visitors today will find traditional prayer flags hanging across the front porch and a small Buddha statue sitting  nestled at the edge of the flower-filled property. A potted bodhi tree, grown from a seed Pryor and Wanicek acquired from the original bodhi in India, is also present in the yard during warm-weather months.

“Three-hundred-sixty-five days a year, we have meditation here,” Egart said. All are welcome. The center’s website — http://www.ysdharma.org — details times and dates for all center activities.

An orientation is offered twice a month, on the second and fourth Monday evenings. And four times a year, members offer a six-session weekly course “that give people a little more training,” Pryor added.

Discussion focuses on methods of meditation, rather than the outcome of the experience, Pryor said.

Wanicek agreed. “The basic essential method of learning how to calm your mind is simple,” she said. The effects are personal, she added.

The center also hosts annual retreats, and modern technology allows members to link into teacher visits and talks at other locations through online live streaming. A lending library is also available for personal study.

Membership “is very loosely based,” Pryor said. “It’s based on showing up.”

As many as 50 people attend the retreats, while from two to 12 are present for the daily meditation, the trustees said.

There is no participation charge or fees, except for the residential retreats. The center runs on donations and volunteer hours. Memberships can be secured by filling out a form with a donation, but are not necessary to participate.

The goal is “to cultivate wisdom and compassion,” Pryor said.

The trustees believe the center has become a regional “magnet,” welcoming seekers from many walks of life.

MJ Gentile said she was grateful to learn of its presence when she moved to Yellow Springs in 2013.

“I’d never met people to sit with before,” Gentile, a massage therapist, said. “I enjoy having tea [after meditation], asking questions and learning from other people,” she said.