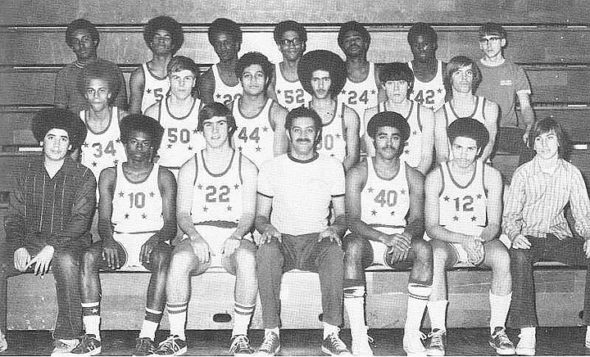 Submitted Photo
Yellow Springs Athletic Hall of Fame inductee Charlie Coles, front row center, led the 1972 YSHS boys basketball team to a district title as its coach. Coles, who died in 2013, went on to win more games at Miami University than any other coach. (Submitted photo)

YSHS sports heroes to be honored

Leo Frank Hughes, Village mayor from 1950–69,  was a state track champ while a student at Bryan High School in the 1930s. He also played basketball and baseball before graduating in 1935, according to his son Michael.

The late Charlie Coles, Yellow Springs class of 1959, was a high school basketball standout who later coached the Yellow Springs boys team before becoming the longtime Miami University men’s basketball coach recognized for earning more wins than any other coach in that school’s history.

After his death in 2013, Coles was remembered as having “inspired a generation of basketball players in Yellow Springs.”

Following Coles on the court a decade later, was Sterling Wright, Yellow Springs class of ’69. Wright went from Lincoln University into a professional career that included playing in the NBA; playing and coaching with teams in Europe, particularly France; and working with the U.S. Olympic Committee and the International Basketball Federation, training and coaching in countries around the world.

All told, Wright estimates he has worked with players and teams in about 80 countries, many war-torn, on four continents.

Three local sports standouts, Hughes, Coles and Wright are among 14 alumni who will be inducted this month as the inaugural class of the Yellow Springs High School Athletic Hall of Fame.

The entire group will be honored in an inaugural Hall of Fame Banquet on Saturday, June 30, at Antioch University Midwest, hosted by the YSHS Athletic Department and the YSHS Athletic Boosters. Tickets, available at Nipper’s Corner and online, are $25, and the community is invited.

The other 2018 honorees, identified by organizers as athletic standouts in their own right, are:

• Sarah (Butler) Lowe, class of 1973, who played volleyball, basketball and softball, and returned to the local school district after college to teach physical education;

• Marcus Johnson, class of 1974, who played football, basketball and track;

Establishing an “elite” group was the intention, Baker added. For its inaugural class, Hall of Fame organizers wanted to identify athletes who “would be a no-brainer” for the community, he said.

Nearly two years in active planning, the Hall of Fame had been a goal of Baker’s since he become athletic director here four years ago.

“The majority of high schools have a hall of fame,” he said, and he believed the recognition “was much needed, much overdue” in Yellow Springs.

The Athletic Department and Boosters club worked together to establish a timeline for nominations and put together a 10-person committee comprised of former players, coaches and administrators to make the selections.

Their goal was to name 10-12 people for the first year’s class, Baker said.

But sticking to those numbers proved difficult.

“When you are selecting from 100 years of history, it is very tough to narrow down,” he said.

The committee aspired to represent an overview of “different eras, different demographics, different sports … to get a good, whole perspective looking back,” Baker said.

At the same time, they focused on pre-2000 graduates in an effort to honor athletes while they or their immediate families can accept the award.

Three of this year’s inductees are deceased: In addition to Coles and Hughes, who died in 1996, Leroy Bondurant died in 1999 at the age of 60.

Bondurant’s children, Tyson Bondurant, an All-State football player, and Teresa Bondurant Wagner, who “played everything,” according to 1975 graduate and fellow honoree John Gudgel, are also among the 2018 inductees.

Baker said that the Hall of Fame organizers developed “a five-year plan” in which each subsequent class of honorees will reduce in number by two, until after five years, when the Hall of Fame will settle on two new inductees a year, with more recent graduates also included.

He foresees no difficulty in naming new recipients.

“We got over 100 nominations” this year, Baker said.

Sterling Wright said he was honored to be included in the inaugural class.

At 6-feet, 8-inches tall, he might seem like a natural to play basketball. But Wright said he didn’t make the varsity team until his senior year of high school. He hadn’t yet reached his full height, but was still 6’4” or 6’5”, he said in a telephone interview this week.

His college career began as a walk on at Lincoln University, but two years later he was named an All-American player.

“I stayed with it,” he said of the work he put into becoming an expert player.

Inducted into Lincoln’s Hall of Fame three years ago, he noted that he was the first and only basketball player to go pro from both Yellow Springs and Lincoln University.

Professionally, he played first with the ABA’s New York Nets and then with the NBA’s Philadelphia 76’ers, before continuing his career in France.

Wright, whose family goes back five generations in Yellow Springs to the Conway Colony, returned to the village in 2008 to help care for his mother, who has since died.

At the time of his return to town he was working as a coach and consultant with the FIBA, and so “could live anywhere,” he noted. He’s remained in the village ever since, and his two daughters graduated from Yellow Springs High School.

He said he tries to give back locally, serving on the Friends Care Board, among other civic activities.

Fellow inductee and Yellow Springs native John Gudgel chose to stay in his hometown, making his career as an educator. Retired as principal at McKinney Middle School/Yellow Springs High School, Gudgel is currently a guidance counselor and track coach.

He said his athletic experiences in high school helped shape him as a person and an educator.

The winner of the 440-yard dash at the state level his senior year, Gudgel was also part of the track team that won the state title that same year.

“It was the first Yellow Springs team to win a state title,” he recalled in a phone interview earlier this week.

As a junior he was also part of the school’s now defunct football team, which surprised everyone by going undefeated that year.

While those wins were stand out moments at the time, Gudgel said the lasting lessons of playing on a team continue to influence him.

“Not everybody was a gifted athlete, but everybody had different strengths” that contributed to the team, he said, adding that he sees “a lot of parallels” to that understanding in the educational setting.

What’s more, “You have to get along with so many different people,” he said. Players come from diverse backgrounds and experiences, but you still have to come together as a team.

Like Gudgel and the Bondurant siblings, many of the inaugural Hall of Fame inductees played multiple sports. And many have served over the years as coaches for aspiring younger players.

Bill Hardman has been a longtime local soccer coach, Shirley Cummins has coached a variety of sports, and Sarah Lowe retired as the middle school health and physical education teacher in 2013, following a high school and college career filled with sports.

At the time of her retirement, she said she was inspired to become a PE teacher by the teachers she had growing up in Yellow Springs.

In her own classes she liked to introduce students to new sports, to give young people a range of possibilities for staying active, and she taught games and activities they might continue playing the rest of their lives.

““These are things you can do your whole life,” she told the News.

Recognizing the full contributions of our local athletes is important, Athletic Director Baker said. The purpose of the June 30 banquet is to celebrate their accomplishments as a community.

“This is a huge event for our community and for those being inducted,” Baker said.

Doors will open at 5:30 p.m., with a cash bar, and hors d’oeuvres will be served at 6 p.m., followed by the dinner at 7 p.m. Dessert and coffee will wrap up the evening at 9 p.m. Tickets are $25, and may be purchased at Nipper’s Corner gas station during regular hours or online via PayPal to YS_Boostersclub@yahoo.com.