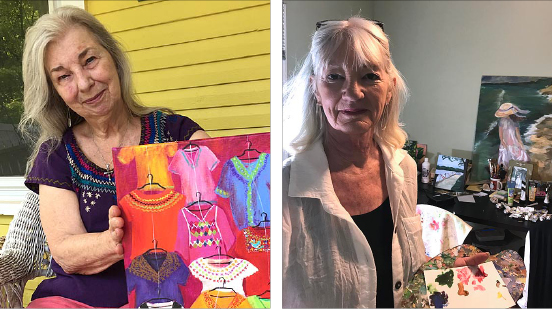 Local artist Anna Arbor, left, and former villager Catherine Lehman will exhibit together at the YSAC Community Gallery in “Places Far, Near and Dear” through Aug. 12. An opening reception with the artists is Friday, July 20, from 6 to 9 p.m. at the gallery, 111 Corry St. (Left photo by Carla Steiger; right, submitted photo)

Jewel-bright embroidered shirts, swirling activity and joyous spills of flowers leap out of Yellow Springs artist Anna Arbor’s recent paintings of Mexican markets. They are inspired by Mexican artist Diego Rivera’s work, which she viewed both in the collection of the San Francisco Art Institute and in Cuernavaca where she marveled at the huge Mexican history mural that he painted in the palace of Cortes.

Arbor personally experienced the colorful chaos of the markets filled with flowers when she visited them on recent Spanish-language immersion trips in 2016 and 2018.

“I really didn’t get it until I saw the markets where the merchants are carting around huge bundles of flowers. The flowers were everywhere and they were sold for graveyard ofrendas, or altars especially for the Day of the Dead celebrations,” she said.

Arbor’s Mexican-themed paintings and several examples of her cut paper relief work will be on display in the upcoming Yellow Springs Arts Council exhibition “Places Far, Near and Dear,” which will also feature the work of Catherine Lehman from Cincinnati, who lived in Yellow Springs from 1992 through 2002.

An opening reception for the exhibition  is Friday, July 20, from 6 to 9 p.m. at the YSAC Community Gallery, 111 Corry St. The exhibit runs through Aug. 12.

Arbor, who is originally from Pittsburgh, has undergraduate and graduate degrees in art education and art therapy.  She taught public school in Jefferson Township for 15 years and moved to Yellow Springs in 1981 because it was within easy commuting distance to her school.  In Yellow Springs, Arbor found an immediate fit.

“I always felt accepted here as an artist,” she said. “In other places they have a stereotype of what an artist is.  Here they don’t. People in town either are artists or appreciate artists. It makes me feel at home here and allows me to do whatever kind of art I like.”

After her teaching job was cut in 1982, Arbor never looked back, and threw herself into the life of an artist. When Village Artisans started that year, she was one of its first members.

“It was wonderful to work on my art and display it, sell it, and that’s when I started doing those paper constructions,” she recounted.

At that time Arbor worked at Gemini, Ken Simon’s former frame shop. Simon had white rag scrap paper that Arbor would take home, cut, and make into pictures, and then mat and frame them, she said.  The pieces, which she later named “Letters to Paradise,” had balconies, windows, and sometimes chairs, and always included a tiny letter.

Additionally, Arbor sketched people’s homes and used the drawings to make paper constructions. Sales from the Village Artisans were augmented by the income she earned at craft fairs. Her work was also picked up by the Taylor and Grastner Gallery, a Los Angeles art gallery, which sold them for several years.

Arbor has a long history with the Yellow Springs Arts Council, and at one time served as its president. A special source of pride, however, is her involvement with the permanent collection, which she helped to create in the early 1990s, she said. At the time, the organization asked for a donation of a piece of art from artists exhibiting there instead of a sales commission, and these donations were the beginning of the collection. YSAC Director Nancy Mellon started a stewardship committee and Arbor still attends its quarterly meetings.

Artist Catherine Lehman, was also on the board of the Yellow Springs Arts Council and a member of Village Artisans. When she lived here, she owned a women’s clothing store in town, Gretchen and Co.

Inspired by Charles Francois Daubigny landscapes they viewed at the Taft Museum in Cincinnati and by Van Gogh paintings featured in the exhibit “Into the Undergrowth” at the Cincinnati Museum of Art, the two artists decided to mount the exhibition of paintings and paper constructions for their show, “Places, Far, Near and Dear.”  The pieces in the show range from some by Lehman that are the size of a postcard, to larger pieces by both artists that are 24” by 30” and larger.

While Arbor’s pieces are inspired by her foreign travel, Lehman finds inspiration in the natural world that surrounds her, such as an “old gnarled tree trunk,” she said in an interview.

“Currently I am creating works of art using acrylic paint, watercolor or pencil,” she explained. “I like to draw with pencil or paint small watercolor paintings when I can work out of doors, using nature as my inspiration.”

According to a 2011 article about Lehman in The Amplifier, an arts magazine from Bowling Green, Ky., “her very favorite pastime is to take a painting-camping trip, which is when she can devote entire days to hiking, painting, and drawing, as well as taking photographs that can be used to inspire paintings when she is working indoors in her studio.”

While Lehman shows considerable mastery in her elegantly composed, and carefully color balanced “en plein air” pieces, she also created a series of prints at Tiger-Lily Press in Cincinnati that were shown in local galleries and an invitational show at the Cincinnati Art Museum.  Her work has also been exhibited in several places in Bowling Green, Ky., including the US Bank Art Exhibit at the Kentucky Museum and the Faculty Art Exhibit at the Warren County Schools’ central office.

Although Lehman is grateful to Edgecliff College in Cincinnati for the excellent training she received there, her art training began much earlier when she was beginning middle school. One of Lehman’s first art instructors was local artist Donna Beavers.  In addition to training her in different techniques, such as sketching and watercolors, Beavers taught her how to view the world as an artist.

“We took trips together in the summers. As we were looking for places to set up our easels outdoors, she would ask me to tell her just how many different colors were in a tidal pool or a tall tree, forcing me to not just see a tree or the pool but to examine things with fresh new ideas of seeing the world,” Lehman reflected.

Both Lehman and Arbor view the world through the prism of their own personal vision and use their perceptions to create memorable and joyful art.

The author is a local writer and artist.