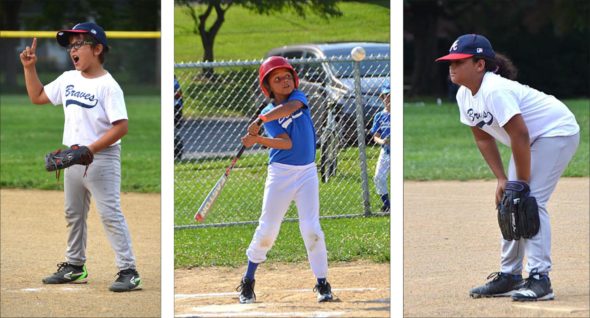 The Sam and Eddie’s Open Books Braves beat the Peach’s Dodgers 17-11 in the Minor League post season tournament Saturday, July 28. At left, Henry Babb encouraged his teammates, “One more out!” Malini MIller batted for the Dodgers while Naima “D.J.” Jones was ready on the pitcher’s mound for the Braves. (photos by Robert Hasek)

The Sam and Eddie’s Open Books Braves sailed through the 2018 Minor League post season tournament and took the championship in a 17–11 decision over the Peach’s Dodgers in the season finale on Saturday, July 28. The two teams played each other close as evidenced by the 11–11 tie going into the bottom of the fourth when the Braves put up six runs and ran away with the lead. Their defensive skills then held the Dodgers scoreless in the top of the last inning as they retired the side, with Lucas Price catching an Alex Main fly ball to seal the victory. Naima “D.J.” Jones paced the team on offense, going 3–3 at the plate with a double and two singles resulting in a team leading four RBIs. Lucas Price, Henry Babb and Luc Amend also went 3–3 on the day with Price smashing a pair of triples resulting in three RBIs and Babb finishing with a pair of RBIs off as many base hits. The team managed 24 total hits for the day. The Peach’s Dodgers collected 20 hits in the championship game, including three each in as many at bats from Malini Miller, Lucas Mikesell and Javin Obringer. Miller’s double and two singles resulted in three RBIs, Mikesell’s second inning triple sent Olivia Hasek and Tomé Rios across the plate and Obringer’s fourth inning triple set him up to score on one of Miller’s RBI base hits.
The tournament’s first semi-final game saw the Sam and Eddie’s Open Books Braves collect 25 hits in their 17–9 win over the Nipper’s Corner Reds on Monday, July 23, to advance to Saturday’s championship. Lucas Price led the way with a 3–3 performance, including a third inning home run and two of his three RBIs. Teddy Horvath’s three base hits led to a pair of RBIs, while siblings Lili and Logan Herzog both went 2–3 and the plate with a pair of RBIs each. Luc and Joey Amend, Henry Babb, Olivia Hasek, Naima and Jaida Jones, Owen Price and Gavin Schaade all contributed one RBI each. The Reds kept the base paths well worn, contributing 17 of their own hits. Noah Diamond’s three singles in as many at bats resulted in a pair of RBIs as did Brendyn Slone’s two base hits. Slone, Diamond and Sameer Sajabi each drove in a run in the fifth. Aiden Gustafson, Kyu Flateau, Noelle Fisher and Neirin Barker all drove in one run each.

The Peach’s Dodgers get the nod for the most improved team of the season after playing their best game of the year and defeating the regular season champion Tom’s Market Pirates 11–4 on Wednesday, July 25, in the second semi-final game. The Dodgers allowed only four Pirate runs in the first inning and took the lead for good with four of their own in the third while adding six more in the final two frames and holding the Pirates scoreless. Tomé Rios went 4–4 at the plate and scored a run, while Malini Miller went 3–3 and Javin Obringer’s 2–3 day at the plate resulted in three RBIs. Veteran Ben Morris and brothers Henry and Charlie Carr all contributed a pair of RBIs. Bryce Fleming and Sherrod Wheeler set the pace for the Pirates, both going 3–3 and scoring a run while Tanner Miller’s first inning double scored Fleming and Tyler Blair.

Saturday’s championship game was followed by the annual awards ceremony and all league picnic. Sameer Sajabi was honored as the 2018 Minor League batting champion thanks to his remarkable .897 batting average. The 2018 Major League batting championship went to DeAndre Cowen of the Adoption Link Braves with a .649 season average. Minor League coach’s award winners were Adeline Zinger and Tavey Johnson for the Tom’s Market Pirates, Morty Levinson and Lucas Price of the Sam and Eddie’s Open Books Braves, Tomé Rios and Charlie Carr of the Peach’s Dodgers and Henry Lake, Sameer Sajabi, and Ella and Emery Fodal of the Nipper’s Corner Reds. Major League coach’s awards went to Brady Baker and Colin Linderman of the Adoption Link Braves, Lucas Dunn and Luka Sage-Frabotta of the Sunrise Café Indians and Jaymon Lange, Josh Clark and J.P. Anderson of the Yellow Springs Toy Company Pirates.

Thanks to all the players, parents, sponsors, coaches, umpires and other volunteers for another successful season, which will be the last for this author as head of the organization. It’s been a great run and I encourage everyone to keep the program going strong and growing to new heights. You can find the final season standings and results on the league website at http://www.ysbaseball.org.