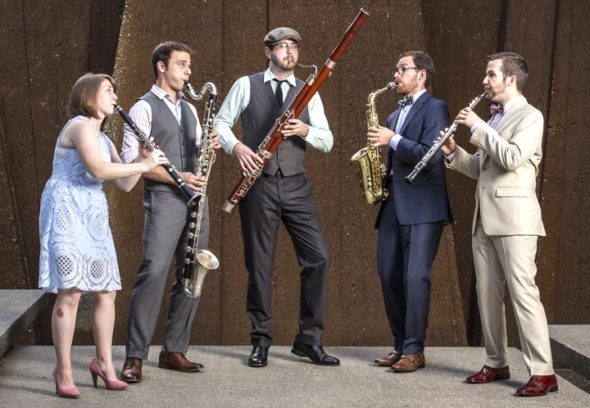 The Akropolis Reed Quintet, “old friends” from CMYS in years past, will open the season on Sept. 23. (Photo by Gary Norman)

Chamber Music in Yellow Springs has announced its 35th season, bringing a variety of ensembles — “Old Friends, New Friends” — to audiences in the Miami Valley. In keeping with its mission of presenting high-quality professional chamber music concerts, fostering community interest in chamber music, and enriching the musical life of the community, CMYS will present concerts throughout the fall of 2018 and spring of 2019. All concerts take place at the First Presbyterian Church in Yellow Springs.

The season begins Sunday, Sept. 23, at 7:30 p.m. with “old friends,” the Akropolis Reed Quintet, veterans of a past CMYS Annual Competition. Formed at the University of Michigan in 2009, Akropolis became the first ensemble of its makeup — oboe, clarinet, bass clarinet, saxophone and bassoon — ever to win a prestigious Fischoff Gold Medal in 2015. Praised by “Fanfare” for its “imagination, infallible musicality, and huge vitality,” Akropolis will present a program including works by Gershwin, Piazzolla, and living legends Marc Mellits, Nico Muhly, and David Biedenbender — classical music bearing a wide array of influences, from rock and electronic music to jazz, tango, chant and folk songs. Akropolis will perform an outreach program at the local Mills Lawn Elementary School on the following Monday.

The season continues on Nov. 4 at 7:30 p.m. with “old friends,” Attacca String Quartet, finalists in the 2007 CMYS Annual Competition. The group went on to win prizes and awards at the Seventh Osaka International Chamber Music Competition, the Melbourne International Chamber Music Competition, and the 60th Annual Coleman Chamber Ensemble Competition. With international acclaim, Attacca has become one of America’s premier young performing ensembles. The Washington Post described them as “four strikingly individual players with the ability to speak eloquently in one voice. … Mastery like this is scarce enough in quartets that have played together for decades.”

On Jan. 27, 2019, the series continues at 7:30 p.m. with “new friends,” JACK Quartet, deemed “superheroes of the new music world” by the Boston Globe and “the go-to quartet for contemporary music, tying impeccable musicianship to intellectual ferocity” by the Washington Post. Dedicated to the performance, commissioning, and spread of new string quartet music, JACK has won Lincoln Center’s Martin E. Segal Award and the CMA/ASCAP Award for Adventurous Programming. The quartet has performed at Carnegie Hall and Lincoln Center in the USA, Wigmore Hall in the United Kingdom, and at major venues in Europe, Japan, Indonesia, Mexico, and Argentina. JACK teaches at a Vermont summer music festival for young players and has longstanding relationships with the University of Iowa String Quartet Residency program and the Boston University Center for New Music.

For the fourth concert, at 7:30 p.m. on March 10, CMYS will host “new friends” Seraph Brass, a dynamic brass quintet drawing from a roster of America’s top female brass players. Committed to engaging audiences with captivating programming, Seraph Brass presents a diverse repertoire including original transcriptions, newly commissioned works, and well-known classics. The group has toured throughout the US, Mexico, and Europe.

Finally, the Annual Competition for Emerging Professional Ensembles will take place at 4 p.m. on April 28. As it did last year, this earlier concert time will enable all audience members to stay for the judges’ final decision — always highly anticipated, since the select chamber groups perform at the highest level. The competition has garnered more attention every year as its winners — first and second-place — continue to launch successful international careers, as this year’s “old friends” exemplify.

Tickets and further information about the groups, their programs and the history of Chamber Music in Yellow Springs are available at http://www.cmys.org or by phoning 937-374-8800.