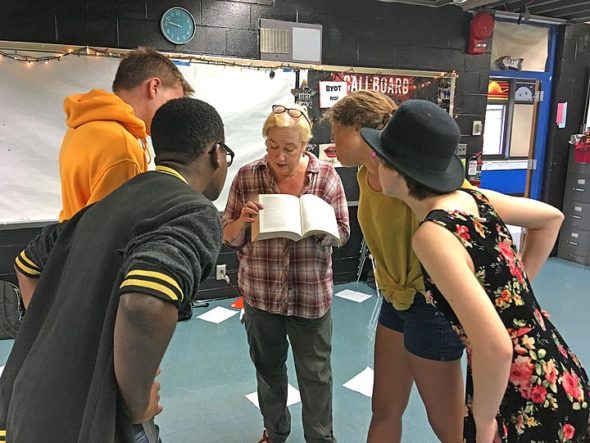 The two productions — one contemporary, one classical — on the docket for this fall’s Bulldog Theater Festival deal with social pressure, expectations and violence.

First up, and opening this weekend, Nov. 2–4, is “Girls Like That,” a no-holds-barred look at the cruelty inflicted on a teenager by her classmates via social media.

To 16-year-old Julia Hoff, one of the production’s actors, the play is relevant to the issues that teens deal with today.

“It exposes the raw, brutal, honest truth about bullying, girl-on-girl hate and the pressures that consume many young women’s high school experience,” she said during a recent rehearsal.

“Romeo and Juliet,” Shakespeare’s familiar and timeless story of forbidden love and societal violence, will run the following weekend, Nov. 9–11. The decision to present the play as an interracial same-sex romance makes the classic work especially pertinent for this generation, according to student-actors.

Taken together, both plays bring to light controversial issues in order to spur change, which is theater at its best, according to the director of both productions, Lorrie Sparrow-Knapp.

“This is the year that we are going in with the sharp edge of the knife to look at the truth in social situations,” Sparrow-Knapp said. “The plays let people speak their truth about exactly what is happening these days.”

Both plays will be presented at the Foundry Theater on the Antioch College campus, with showtimes at 8 p.m. on Fridays and Saturdays and 2 p.m. on Sundays. Due to potentially disturbing material in “Girls Like That,” parents may want to accompany their middle-school-aged students, and young children are discouraged from attending.

Sixty-four students from Yellow Springs High School and McKinney Middle School are in the productions as either actors or crew members. “Girls Like That,” with a small cast, is primarily performed by students in the upper grades.

“Girls Like That” was written in 2013 by British author Evan Placey. The play is set in an upscale girls school, St. Helen’s, in contemporary Great Britain.

The girls in the play have gone to school together since kindergarten. The dialogue alternates between their interactions as young children, and then later as young adults, as they viciously attack one of their own, Scarlett, when a naked picture of her mysteriously arrives on their phones.

Save for Scarlett, the girls remain unnamed throughout the play, and they never emerge as individuals. In addition to being unnamed, their identities are further submerged by their matching school uniforms. Their language of shaming, blaming and insulting is harsh and hurtful.

The prevalence of such cruelty is not news to one of the actors, 15-year-old Annlyn Foster. She said she feels constantly judged about her appearance, especially by male classmates.

Not only has she experienced bullying, she believes it to be ubiquitous, she said,  adding that the play, while important to present, has been emotionally taxing.

Another actor, 15-year-old Izzy Ellis, also found the material difficult, but said she believes in the importance of shining light on the issues.

“Some of the content is really hard and uncomfortable,” she said. “I think it’s okay to be uncomfortable — to get out of your comfort zone — and be exposed to the truth.”

The play takes place on a bare stage framed by a gigantic stained glass window modeled after the The Healing Window from a cathedral in Manchester, England. Below the window are the words “Diversity, Healing, Hope, Inclusion and Glory.” Sparrow-Knapp felt that the window’s representation of sanctuary and the text’s suggestion of healing in a world riddled with intolerance seemed to match the play.

The only props in “Girls Like That” are the plastic chairs used by the actors. The austerity of the set gives a laser-like focus to the actors and the dialogue.

Reflecting on today’s online environment, in which cruelty can be nonstop, Sparrow-Knapp said she doesn’t envy what her students face.

“I don’t know how I could have done school with social media,” she said.

But being aware of the abuses of social media “can help students to have empathy for those affected and avoid problems themselves,” Sparrow-Knapp added.

Forbidden love has always been at the center of time-honored “Romeo and Juliet.” This YSHS production takes the theme a step further by casting as the lead couple two women of different races.

To Arielle Johnson, 15, who is black and playing Juliet, the casting makes sense.

“Love is love, and it doesn’t matter what the circumstances are,” Johnson said, quoting director Sparrow-Knapp.

In the role of Romeo is Sayre Hudson, who is 16 years old and white. She said she feels that the casting shows progress in Yellow Springs Schools.

“Casting two females is very boosting,” said Hudson. “It doesn’t matter what gender you are, you can go for any role.”

Sparrow-Knapp said, however, that she hadn’t set out to cast the two leads as a same-sex couple.

“These two were the best suited for the roles,” she said. “They have the level of honesty and courage to do this,” she said.

Nevertheless, the production decision energized the cast and was especially reinforcing for the students who identify as members of the LGBTQ community, they said in interviews.

Camryn Strolger, 14, another actor in the play, said she thinks the casting of two women as the play’s leads was “pretty cool.”

“As a member of the LGBTQ community, it is really great to see that relationship out in the open,” she said.

Strolger added that participating in the play has improved her feelings of safety in the school and community.

As for the love story, under Sparrow-Knapp’s direction, the leads act childlike and interact playfully, according to Arielle Johnson.

When asked about any changes to the script, Hudson said that there were none. All of the pronouns and dialogue are just as the bard wrote them.

In addition to enthusiasm for the casting, actors also praised the authenticity of the fight scenes. Sparrow-Knapp brought in Jake Guinn, a martial arts “flow master” — who is expert in adapting martial arts to the stage — from Atlanta, Ga., to teach the young actors how to fight safely with stage knives.

The high school actors were universal in their respect for, and trust in, their director.

“All of her visions are amazing, even when they sound ambitious at first,” Hudson said, after which several cast members chimed in with a loud, “We love Lorrie!”

The district’s theater arts producer, Jovan Terrell, said that the dynamic reflected on the stage in the form of a same-sex relationship is true to how art has always reflected the current culture. She said that the students, in telling these difficult stories, “will propel what our culture has been to what it will become: brilliantly and boldly loving oneself and proud to show it.”

Yellow Springs High School and McKinney Middle School Interim Principal Jack Hatert is also enthusiastic about the director and the production. He said he is proud of the production team and the students for having the courage to offer and perform these shows. And he stressed that adult educators should provide guidance and mentorship.

“We should be the leaders when it comes to offering students opportunities to challenge controversial topics, outdated traditions and societal ills,” he said.

He added that, as a district, teachers and staff are looking at where gender stereotypes and traditions limit student access in schools and are working to address those issues.

According to Nickell, Sparrow-Knapp led students in using body language to perform the Shakespeare lines. The method, called “folio training,” is based on the Royal Shakespeare Company’s education series and was done in conjunction with verse training, which refers to adding rhythm to the narration.

Bringing relevant theater productions to Yellow Springs High School is something that Sparrow-Knapp plans to continue. While plans for next year’s productions have not been finalized, she said that they are considering doing “The Sound of Music,” which takes place against a backdrop of the rise of the Nazi Third Reich in Austria.

Her emphasis on the prevalence of violence in society — which she views as an integral part of “Romeo and Juliet” and “Sound of Music” — and how it impacts young people today, will remain center stage in her dramatic offerings.

*Carla Steiger is a local writer and artist.