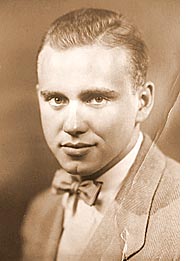 He was born on Feb. 12, 1926, in Troy, Ohio, to Ralph Whitman Agna and Mary Carmel Malone Agna. He was a high-achieving student as well as a champion tennis player. Growing up in small-town southwest Ohio, he often pointed to the formative friendship that he had with a fellow tennis player who happened to be African American. He said that this friend opened his eyes to inequities and racism.

James graduated from Troy High School at age 16 and entered Purdue University in Indiana. His plan was to become a chemical engineer, but, after he took a government-sponsored abilities exam, he was told to consider a career in medicine. He finished college in two years and entered the University of Cincinnati Medical School. Because of a shortage of physicians at the time, his medical education was paid for by the Navy. While at U.C. he met Mary Allott, a medical student in the class below his. They married in 1949 and celebrated their 65th wedding anniversary in September of 2014 before she passed away in January of 2015.

Jim’s life was full of adventures, courageous and bold stances, and dedication to making medical care a right for all citizens in the U.S. His first job out of his medical residency in internal medicine was as senior assistant surgeon in the U.S. Public Health Service through the Harvard School of Public Health in Burma. He and Mary lived and practiced there for two years and during that time their first child, a daughter, Gwen, was born in Rangoon. They returned to Cincinnati, Ohio, in 1953 and James was a postdoctoral research fellow in the Metabolism Laboratory at Cincinnati General Hospital. During the years in Cincinnati, their son, Jacob, and daughters, Mary Elizabeth (Molli) and Brigitte, were born. With four children under the age of 6, he and Mary set off in 1958 for jobs at the Hôpital Albert Schweitzer, built by Larimer and Gwen Mellon, in Saint Marc, Haiti, where he became the medical director. 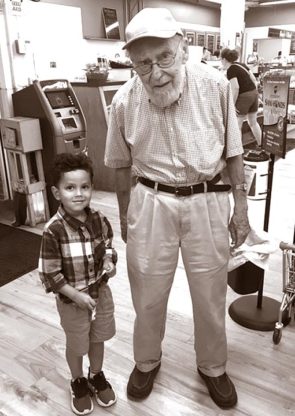 Jim Agna at Tom’s with his grandson Intharat (Eton) Jennikron.

Mary and Jim returned to the States and established their home in Yellow Springs in 1959 in the Fess House at 830 Xenia Ave. Their son Tom was born in 1960. Jim joined a multi-specialty medical practice, the Yellow Springs Clinic, as an internist, and was also the Antioch College physician. The practice was unusual in the ’60s and was viewed with some suspicion in the area, especially due to Jim’s outspoken support of the new idea called “Medicare” as well as his advocacy for a national health plan. The ’60s in Yellow Springs — and in the U.S. — were tumultuous times politically and socially. Jim was labeled a “socialist” and a “communist” because of his views. He was amused by this and countered by identifying as a “democratic socialist” in the Norman Thomas tradition.

In his medical practice, he enlisted his partners in prescribing birth control pills on request to Antioch students — the first college to do so — as well as establishing a room in the clinic for students who were having difficult LSD trips. He advocated the legalization of marijuana and signed a letter of support as a physician to the State of Ohio legislature. He was interviewed by the Wall Street Journal about his promotion of birth control and support for students who were on “bad trips.” He and Mary were also active in the local and national civil rights movement. They joined other families in Yellow Springs in welcoming African-American high school seniors from Farmville, Va., to their homes so that they could complete their high school education after their schools closed, rather than follow the order to desegregate. They were particularly proud to say that Sam Taylor was their sixth child, third son.

In 1970, Jim and Mary moved the family and became faculty members of the University of Cincinnati Medical School. Mary was a leader in establishing the first residency in the U.S. in Family Medicine and Jim was in the first residency in the nation in Emergency Medicine. They both were determined to provide access to primary care for the low-income and uninsured as part of their commitment to a national health care system. Jim and his colleague, H. Thomas Blum, campaigned for funding as well as acceptance of the restructuring of the Cincinnati General Hospital, recognizing that the major portion of patients who seek assistance are in need of primary care, not necessarily specialized care. Patients at the time were using the ER as their primary care clinic. They elevated Emergency Medicine to the level of a medical residency and established neighborhood health centers in underserved and low-income areas of Cincinnati. Their work became a national model with several published articles and awards for this work. Residents from the Family Medicine program that Mary helped to establish did rotations in these clinics.

Jim and Mary were recruited, based on their reputation, by Wright State University Medical Center in 1978 to establish similar residencies. They were happy to join Wright State and also to return to live in Yellow Springs, where they remained for the rest of their lives. Jim continued in his position as professor of postgraduate medicine and continuing education at Wright State until retirement in 1988. He then joined Hospice of Dayton, Ohio, as a staff physician. His time with Hospice was rich and important to him. As he was quoted in the YS News in an article by Amy Harper, “Hospice creates a climate that makes it okay to die. It treats death as part of a normal process.” Harper wrote: “Hospice is not the first place Agna has encountered the acceptance of death that is lacking in most of modern society. The first was 40 years ago in a Burmese jungle, where Agna tried to convince people to submit to malaria vaccinations.” Harper quoted Jim: “I was a young physician with skills in medicine and public health, enthusiastic about helping these people improve their lives.” Harper wrote: “Speaking through an interpreter, Agna told the village elder, ‘If you eradicate malaria, you’ll live longer.’ There was a pause after the interpreter told the old man what Agna had said, and then the reply: ‘He wants to know why you want to live longer.’ Agna laughs remembering the exchange.”

Jim and Mary enjoyed a long retirement — theirs was a remarkable love and a devoted partnership. They traveled extensively — to Europe, back to Southeast Asia, to now Myanmar, to Cuba to observe its health care system, and all over the country to visit their children and grandchildren. Their dinner parties — most often with Mary’s shrimp curry — were legion. Jim volunteered for the YS Senior Center as a driver as well as a Title I reading teacher at Mills Lawn Elementary School. He maintained an avid interest in politics, reading the NY Times — paper version, reserved at the Emporium for him — every day, including on the day he died. He was a voracious reader and longtime member of a men’s book group. Jim had a lifelong love affair with jazz and passed along his love of music in all forms to his children. In spite of his strongly held social/political ideals, he was never humorless. He was self-deprecating and very funny. He enjoyed surrounding himself with friends who didn’t take life seriously. His son Tom, a comedian and comic writer, inherited his sage, often hilarious and always affectionate views on human behavior.

Jim’s professional and volunteer accomplishments were extraordinary. But by far his and Mary’s greatest achievement, in their eyes, was their family. They all gathered for his 90th birthday on Feb. 12, 2016, and for son Tom’s wedding in July 2018. He is survived by his daughters, Gwen Agna (Tom Marantz), Molli Diebold (Steve Diebold) and Brigitte Agna (Andrew LaCroix); his sons, Jake (Patty Tobias) and Tom (Puntita Jennikron — Jen); grandchildren, Nell Marantz (Alex Smith) and Kate Marantz, Eve Ackil (Dan Ackil) and Mae Agna, Chad Diebold, Paige Diebold Babb (Brian Babb), Faye and Jake Diebold, James Wasihun Agna LaCroix and Intharat Jennikron (Eton); great-grandchildren, Esme Fielder Smith-Marantz, Lila Mae and Graham Faris Ackil; and many dear friends. His children, grandchildren and great-grandchildren are so very proud of his accomplishments and of being a part of his family.

The family wishes to thank Dr. Donald Gronbeck and the staff of Greene Memorial Hospital, Soin Medical Center and  the Friends Care Rehab Center for their attentive and loving care during his brief decline. A special thanks to the Unitarian Universalist Fellowship End of Life Committee members — Al Schlueter, Donna Cottrell, Bobbi Treadwell, Greg Treadwell, Paul VanAusdal and Dave Turner — for the comfort and support they provided Molli at the time of his passing.

The family plans a celebration of the lives of Jim and Mary Agna on July 6, 2019; details will follow. In lieu of flowers, donations in his memory may be made to Kids on the Ball, 19 Lindenwood Drive, South Burlington, VT 05403, or Physicians for a National Health Program, 29 East Madison, Suite 602, Chicago, IL 60602.

One Response to “James Whitman Agna”