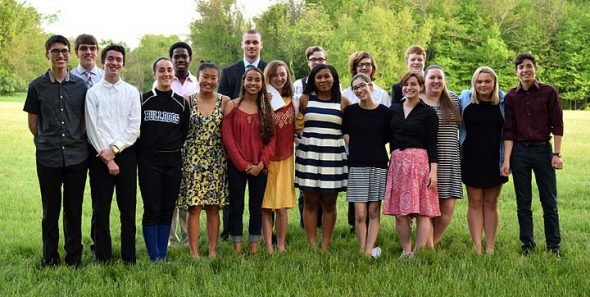 At the annual Yellow Springs High School award ceremony on May 17, seniors, along with a few juniors, were honored for their academic achievements with the presentation of scholarships and awards.

Senior Ursula Kremer received the Kay Corbin Memorial Scholarship in the amount of $5,016, the Theater Arts Association award of $500 and the Mary Jane Bachtell Creative Writing Award for $500.

Danny Grote received the Go the Extra Mile Award for $1,000, the Bulldog Scholarship for $1,000 and an award from the Shirley Mullins Endowment Fund.

Lake Miller received the YS Chamber of Commerce Scholarship for $2,000.
Nekyla Hawkins was the recipient of a $700 award from the Greene County Youth Activity Fund and the Simply Women Award of $500.

Alice Miller received the John McConville Scholarship in the amount of $1,000.
Thomas Amrhein was the recipient of a $1,000 Odd Fellow Scholarship.

Gabriel Day received a YSEA Scholarship for $800 and an award from the Shirley Mullins Endowment Fund.

Junior Hannah Morrison received the Bausch and Lomb Honorary Science Award, which honors outstanding high school science students. Those who win the award are automatically considered for the Bausch and Lomb Science Scholarship at the University of Rochester.

Junior Sam Green was the recipient of the Rensselaer Medal, which is awarded to high school students around the country who have distinguished themselves in mathematics and science. Medal winners who are accepted to and enroll at Rensselaer Polytechnic Institute receive a merit scholarship with a minimum value of $25,000 per year for four years.