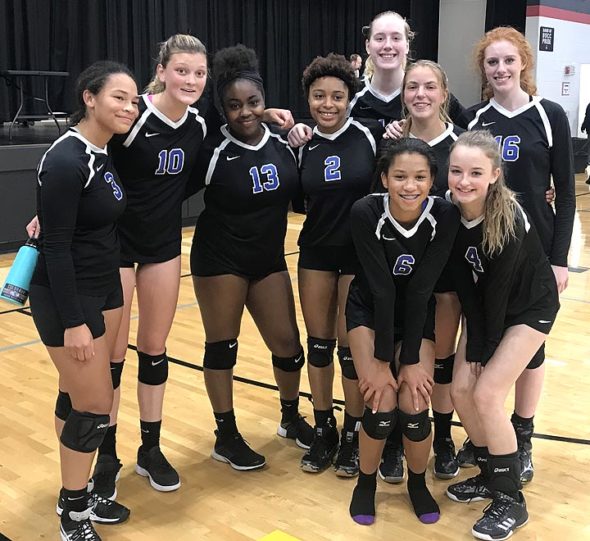 Boys bow out in district finals

The Yellow Springs High School boys varsity soccer team ended its season on Thursday, Oct. 25, with a loss to Madeira in the Division III district finals. The Bulldogs lost 6–4 in the match, held at Hamilton High School.

According to the Metro Buckeye Conference website, the team’s final regular season record was 13–4–2.

Two Bulldogs were in the top four of the league in scoring. Kaden Bryan was in the number-three spot with 20 goals in 19 games, and Mateus Cussiolii had 17 goals. Both players were tied for fourth in the league for assists, with 16 each.

After the YSHS girls varsity volleyball team finished up a great regular season going 18–2 overall and remaining undefeated in the Metro Buckeye Conference, they were ready to take on the challenge of winning their first post-season tournament game — a feat that, according to obtainable records and villagers’ memories, hasn’t been accomplished since 1977.

Drawing a seventh seed in the District 9 Division IV tournament, the Bulldogs were chosen by 10th-seeded Fairlawn High School (Sidney) Jets. It seemed that Fairlawn had thoughts of an easy match for themselves against the Bulldogs.

When game time arrived, it first appeared the Jets were right. Coming out looking a little flat, the Bulldogs lost the first two sets, 20–25 and 13–25. Something happened in the Bulldog huddle between the second and third sets, however — they came back to the court looking like a totally different team.

Tyler Linkhart started off the third set serving and took a 3–0 lead for YSHS, followed by Olivia Snoddy, who upped the lead to 7–1. Yellow Springs had control of the game and refused to relinquish it.

Great kills and digs by Emma and Alex Ronnebaum, along with kills by Linkhart and Aaliyah Longshaw, showed Fairlawn what Bulldog volleyball is all about. YSHS easily won the third set 25–13.

The Jets battled back harder in the fourth set, but Yellow Springs, once again, took the lead from the beginning and kept the Jets trailing. The Jets made a strong push at the 24–19 mark, but it wasn’t enough to overcome the Bulldogs, who won the set 25–23.

The fifth and deciding set began with momentum in the Bulldogs’ favor. The Jets seemed to be in disbelief that, after they took a two-point lead, Linkhart went back to serve and the Bulldogs took back the lead with an ace and a kill by Emma Ronnebaum. At that point, the Jets couldn’t seem to handle the Bulldogs’ intensity, as the Bulldogs went on to win the set, 15–7, on a kill by Linkhart.

Linkhart had a great game, with a season high of 24 kills, along with two aces, 22 assists, three blocks and 27 digs. Emma Ronnebaum put down 12 kills and four blocks, and had 14 assists and 22 digs. Alex Ronnebaum had 10 kills and seven blocks, along with a season high of 32 digs. Longshaw and Angelina Smith each had four kills, with Longshaw posting nine digs and Smith with 12 digs. Smith also denied the Jets, with five blocks on the day. Annlyn Foster had five digs and three assists. Snoddy had a great day serving to key players. It was a great win with an even better team effort for the Bulldogs.

“I’m so happy for these girls,” Coach Linkhart said. “They looked so out of it during the first two sets. Instead of hanging their heads, they chose to come together and play the volleyball they’ve been playing all season. They played hard and really deserved this win!”

The next matchup was against 15-seeded Catholic Central Irish. The Bulldogs came out ready to play and took the first two sets with relative ease. The third set proved to be a challenge, as the Bulldogs eased up and found themselves down 8–17. A key block by Alex Ronnebaum seemed to wake the Bulldogs up as Smith went back to serve and the Bulldogs earned six points, bringing the game to 15–17. Battling back and forth, neither team was willing to give up the fight. The Bulldogs reached match point four times, but the Irish found a way to keep themselves alive in the game. A mishandled serve receive and a hitting error by the Bulldogs allowed the Irish to take the set, 30–32.

Going into the fourth set, the luck was with the Irish, and the Bulldogs found themselves in quite a hole, losing 10–20. Once again, Snoddy, with three aces, was a key player, with her serves forcing the Irish out of system and pulling the Bulldogs to within five points. Add to that some amazing sets by Emma Ronnebaum to Linkhart, Foster and Alex Ronnebaum and some unbelievable digs by Smith, and the Bulldogs started to feel the energy return to their side of the net. Both teams battled back and forth for a few points before another big block by Alex Ronnebaum put Emma Ronnebaum on the serving line, with the score at 17–23. Emma’s serves were right on as she picked on the Irish’s poorest passers, keeping them out of system and serving ace. Emma finished off the game for a Bulldog win of 25–23. Emma finished the game with 11 kills, three aces, 15 assists, one block and 28 digs, while her sister, Alex, had 10 kills, two aces, seven blocks and 19 digs. Linkhart came up big again with 21 kills, two aces, 20 assists, one block and 28 digs. Foster played one of her best defensive games, digging up 20 kill attempts, while Smith denied the Irish by digging up 36 attempts. Longshaw had four kills, along with three aces. Final scores were 25–15, 25–21, 30–32, 25–23.

Not only did the Bulldogs earn their first post-season win, they were able to secure wins in two tournament games. This set them up for the Sectional Finals against fourth-seed Lehman Catholic. Both teams came out strong, keeping the score tight for most of the match. A few unlucky balls off the blocks and some amazing saves by the Cavaliers saw the first set go to Lehman.

Undeterred, the Bulldogs came out swinging and blocking in the second. The Bulldogs had the lead for most of the set, but the Cavaliers were hot on their heels, until they were able to tie it up at 22–22. A substitution by the Irish gave them a strong front row, which allowed them to pull out the win.

Once again, it was a battle to the finish but the Irish came out on top, taking the third set. Match scores were 19–25, 22–25, 19–25. Linkhart ended with nine kills, one ace, 14 assists, three blocks and 12 digs. Alex Ronnebaum put up 10 blocks and put down six kills, three aces and 13 digs. Emma Ronnebaum had seven kills, two aces, seven assists, six blocks and seven digs. Longshaw put down two kills and one block along with two digs. Smith and Foster each had one kill and seven digs.

“I’m so proud of this team,” Coach Linkhart said after the loss. “They played a great game. Every player contributed to the team’s two conference wins. I feel each one of them performed their task to the best of their ability. I enjoyed watching this team play. I’m really going to miss them.”