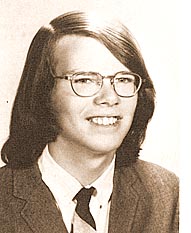 Yellow Springs lost one of its icons on Jan. 20, 2019, when Paul M. DeLaVergne passed away after a brief illness. Paul was a long-time Yellow Springs resident and village elder who will be remembered by many as a master woodworker, furniture maker and artist in all things wood.

Paul was born on July 20, 1952, in Dayton, to George and Hazel DeLaVergne. He grew up in Medway, Ohio, where he graduated from Tecumseh High School after completing a specialized program in electronics. For a time, he also studied at Wright State University, where he was more likely to be found playing Frisbee on the quad than in class. Early in life, Paul also discovered a passion for music. At the tender age of 17 — against the wishes of his father — he headed to a three-day music festival in Woodstock, N.Y. If you dared ask him about it, you could be certain to lose several hours with incredible tales from one of the highlights of Paul’s life.

As the Vietnam War escalated, Paul became a conscientious objector. Despite his father’s military service, Paul chose his own path and served in a free medical clinic in San Pedro, Calif., for two years. He obtained his exemption from a county notorious for the lowest conscientious objector approval rates, in part with a recommendation by the governor of New Jersey, whom he had met and befriended during a trip to Princeton, N.J., the year prior. He was proud that he did not add to the war he viewed as a moral calamity, while still fulfilling his obligation to his community and the nation.

While in San Pedro, Paul met the only woman he would marry, Amanda. They wed in 1977 at the Self-Realization Fellowship retreat at Lake Shrine. Although a long-term marriage was not their destiny, Paul and Amanda remained good friends for all the years to come. Amanda and her son, Lucas, were an important part of Paul’s life, as evidenced by the many photos still found in his house. Until the end, Amanda acted as one of Paul’s caregivers, delivering home-cooked meals to ensure he ate well, a testament to their close connection.

In California, Paul also discovered another love: woodworking. He began his career in a boat building business, learning the art of fine wood joinery. It would be a passion that dominated the rest of his life. After returning to Yellow Springs in the late ’70s, he co-hosted an afternoon radio program on WYSO, and became interested in Japanese language and culture, which stirred a deep passion for other cultures.

In 1980, Paul and a childhood friend traveled to India, eventually making their way through Nepal to Katmandu. The trip would be formative for Paul, sparking a life-long interest in Buddhism. He saw the foothills of Everest, sailed the Ganges River and watched the sunrise in the Himalayas. After getting stranded in Nepal, and with a plane to catch in India, Paul talked their way onto an Australian tourist bus headed back to India with a stop at the Taj Mahal. This trip became one of the highlights of Paul’s life, as he played flute in the famous mausoleum, to the delight of the Australian tourists and the locals alike.

Upon returning to Yellow Springs, Paul began his woodworking business, DeLaVergne Woodworks. For many years, he produced the finest furniture and wood crafts, works of art that still adorn many Yellow Springs businesses and homes throughout the region. Later in life, as his eyesight failed, Paul re-invented himself once more, pursuing a license in massage therapy. He passed the board exam and practiced for a short time before returning to his love of woodworking. DeLaVergne Woodworks continued to produce amazing handmade articles, from full furniture pieces to beautiful jewelry boxes to the functional cutting boards that many of us will use for years to come.

Paul was preceded in death by his father, George; his mother, Hazel; and his brother, Doug. He leaves behind a nephew, George, and a niece, Katie; his former wife, Amanda; and Lucas. Yellow Springs is a richer place because of Paul’s industry and artistry. He remained a typically enigmatic personality to the end, a devout Buddhist who was never afraid to share an opinion or a story. For those of us lucky enough to call him “friend,” the silence will be the hardest part. His stories captured the imagination and showed a life lived to its fullest under his own terms, pursuing both passions and friendships. He wanted to be celebrated, not mourned. His life serves as an amazing reminder to live each moment to the fullest. In one of his last posts on social media, Paul held hope for the future — for all of us: “May the next year bring Peace & Prosperity to our Planet. If this sounds naïve, I do still Believe & have Faith!”

Services are being arranged for the spring and will be announced at a later date.