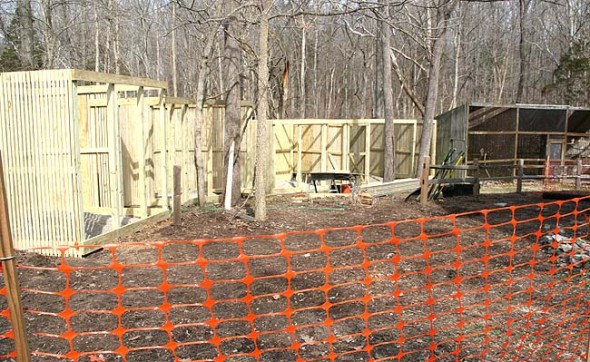 The Raptor Center is rebuilding its raptor cages, many of which are over 30 years old and no longer comply with regulations. (Photo by Suzanne Szempruch)

A rehab for the rehab

The large cages for Glen Helen’s 30 permanent avian residents have served the Raptor Center for over 30 years. But the wire and wood are aging and have not met current regulation for some time. So thanks to some generous local and regional donors, this spring the birds are getting all new digs.

Raptor Center Director Bette Ross is busy managing the project, and moving the birds around every few days has been quite a challenge.

But she is excited to finally be getting the right size spaces, for the right birds, at the right height with the correct gauge of steel and double doors.

“I’ve been planning this for years, because I’ve always wanted better order for the birds at the Raptor Center,” she said.

The $40,000 construction project to replace the 11 cages built by Jerry Papania and former Raptor Center Director Roger Beatty in 1983 with 14 news ones began in early March and is expected to be completed sometime in May. Andrew Kline of Green Generation Building is doing the work in four phases, so that the cooper’s hawks, screech owls, falcons, kestrels and vultures can all find temporary housing while their cages are being built.

As no American raptor center would be complete without a stately bald eagle, the Glen will also build a new cage for its newest white-headed resident “Leuko,” a 17-year-old eagle with a permanent wing injury who came to live at the Raptor Center last April. Because Solo was just as his name implied, Leuko has been living in one of the rehabilitation cages tucked into the woods behind the Raptor Center. And though no mere bird could ever replace Solo, who died last month, Ross is happy that the public will finally be able to meet Leuko.

Most of the funding for the renovation has come from private local donors over several years, and one $10,000 chunk was raised by 100 Women Making a Difference in Greene County, led by local members including Sandy McHugh, Macy Reynolds and Gayle Gyure.

Though the Raptor Center also houses an average of 150 temporary resident raptors in larger cages in the back, the center’s education program is built around the permanent residents, who, while kept comfortable, are always on display. If there is still funding left after the cages are complete, signs, fencing and landscaping will be the final touch on a long-awaited rehab for the Raptor Center.

One Response to “A rehab for the rehab”